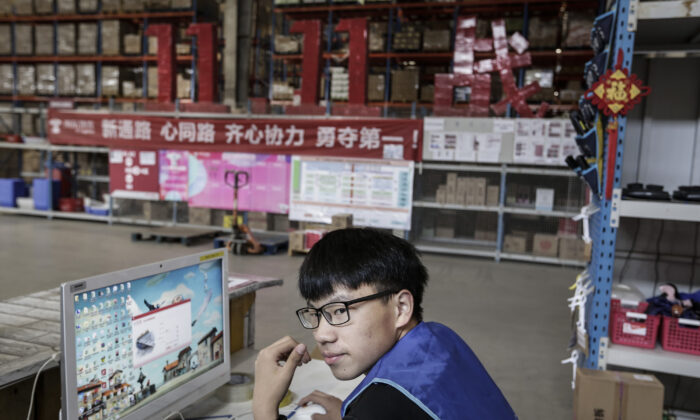 An employee uses a computer to check parcels at the warehouse of a logistics base of JingDong Group on November 5, 2019 in Wuhan, Hubei Province.China. (Wang He/Getty Images)
China Business & Economy

Amid the authorities’ sweeping crackdown on the internet industry, Chinese tech giants are axing thousands of employees following last year’s resignation of founders or CEOs from their companies.

Speaking to The Epoch Times on April 23, Shen Rongqin, a Ph.D. at the European Institute of Business Administration (INSEAD) and associate professor at York University in Toronto, Canada, said that major internet companies faced a headwind in their development as Chinese authorities have been imposing strict controls on the internet since 2021.

On April 22, an employee of JD.com (JD), known as also Jingdong Group, a Chinese e-commerce giant, posted on Maimai, a Chinese LinkedIn, that on March 31, he was unexpectedly asked to sign a notice of termination of labor relations with the company, and his contract was discontinued that day. His workplace access card was immediately  deactivated.

“Ten years of dedication to JD ended one day with just a piece of paper,” he wrote.

JD has conducted large-scale layoffs since March, and topped Maimai’s hot search term on March 29. A number of anonymous sources claiming to be JD workers said that the company’s human resources department forced employees to leave on their own initiative on the grounds of not meeting performance standards and problems being found in employees’ computers, according to a report by a Singapore-based digital media outlet on April 22.

Jingxi, one of JD’s subsidiaries acting as a special offer shopping platform, cut 10-15 percent of its 4,000 employees, removed the departments located in provinces such as Guangxi, Sichuan, and Guangdong, and slashed half of the jobs in the advertising business.

Other business units such as JD Worldwide, JD Retail, JD Logistics, and JD Technology have set layoff ratios between 10 and 30 percent according to the Chinese version of VOA on April 2.

JD had 314,906 full-time employees as of 2020 according to Statista, a German-based portal site specializing in market and consumer data.

JD’s Beijing headquarters didn’t respond to The Epoch Times’ request for comment about the layoffs.

In March, China’s Manufacturing Purchasing Managers’ Index (PMI) dropped to 49.5 percent reported the Bureau of Statistics on March 31. A value below 50 percent represents a negative situation, which, according to Shen, drives the internet sector “even worse.”

Besides JD, high-tech giants like Alibaba and Tencent laid off tens of thousands of employees in February, multiple sources familiar with the matter told the Chinese media.

Alibaba is axing at least 15 percent of its staff or about 39,000 people. And Tencent planned to cut its low-margin or loss-making business this year, most probably conducting layoffs in Tencent Video and Tencent Cloud, according to Reuters on March 16.

Some analysts believe the Chinese Communist Party’s (CCP) variable and tough policies, as well as the poor market environment since the outbreak of COVID-19, led to unprecedented layoffs at Chinese high-tech firms in recent years.

“Large-scale layoffs in the internet industry grabs public attention—although the sector makes up less than 2 percent of China’s employment-population—highlighting the deterioration of a workforce market for domestic demands. It may be a symbol of the changing macro-environment in China as a whole,” Shen said.

According to Shen, this deterioration is partly due to those internet firms reaching a plateau phase, a stagnation with few opportunities left for rapid growth. Therefore, venture capital will not be invested in the sector anymore.

Shen said some large technology enterprises have failed in their efforts to explore diversified businesses, citing DAMO Academy, a science research institute backed by Alibaba, as an example.

As of April 22, the share prices of Alibaba, Tencent, and JD, which are listed in Hong Kong, have dropped 60 percent, 45 percent, and 30 percent respectively from the year before.

Huang Jinqiu, director of Asia Newsweek, told The Epoch Times he believes the wave of layoffs indicates that the dividends from previous years of China’s reform and opening-up have been exhausted, and that old reform is now confronting “deep water.”

“The political system reform is at stake. Unless the [CCP] body system is completely eradicated, it will be impossible for China to achieve real economic prosperity.” Huang said.

In the face of the CCP’s tight grip on leading internet companies last year, founders and CEOs have withdrawn from their companies one after another.

On April 7, JD Group announced that Liu Qiangdong, 48, dropped his position as chief executive officer, retaining his title as chairman of the board. Since 2020, Liu Qiangdong has stepped down from at least 230 positions in 228 companies of JD.

The exodus of executives first began on Sep. 10, 2019, when Ma Yun relinquished his role as chairman of the Alibaba board. After that, the Ant IPO faltered, and Alibaba was  fined 18.2 billion yuan (about $278 million); Alibaba was then investigated by the regulatory authorities for an alleged monopoly.

On March 17, 2021, Huang Zheng, 40, chairman of agriculture technology platform Pingduoduo, announced in a letter to shareholders that he was resigning from the company.

On May 19, 2021, Zhang Yiming, the CEO of internet giant ByteDance and co-founder of the short-video app TikTok, stated in an internal letter that he was stepping down from his position.

On Oct. 29, 2021, Kuaishou Tech., a video-sharing mobile app developer, announced that its board had agreed to the resignation of co-founder Suhua as CEO.

Wang Xing, CEO of the shopping platform Meituan, canceled all of his 17,000 plus posts on Fanfou, a Twitter-like microblog founded by Wang, after the State Administration of Market Supervision announced on Oct. 8, 2021, that it was fining Meituan 3.442 billion yuan (about $519 million) for alleged monopoly violations.