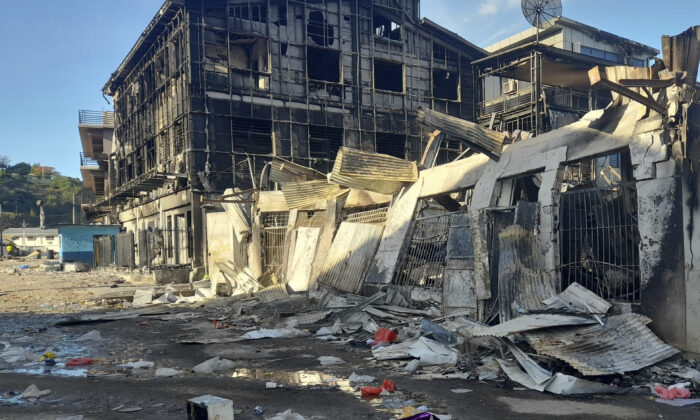 This aftermath of a looted street in Honiara's Chinatown, Solomon Islands, on Nov. 27, 2021. (Piringi Charley/AP Photo)
Thinking About China

Beijing's political bribery is the cause

Chinatown and a police station in the Solomon Islands’ capital city of Honiara were partially burned down during protests that started on Nov. 24.

Many locals are unhappy with Prime Minister Manasseh Sogavare’s 2019 turn away from Taiwan and toward Beijing (known locally as “The Switch”), not to mention the country’s poverty, preferences given to Chinese residents, and jobs going to foreigners hired by Chinese companies rather than to locals.

Beijing is said to have offered parliamentarians as much as $615,000 each to vote for the switch, and documents show that $200,000 embassy payouts were made to 39 pro-Beijing members of parliament—the number required to amend the constitution, which Sogavare wants to do.

The result of Beijing’s overbearing influence in the Solomon Islands and its economic exploitation of islands distant from the capital is near ethnic civil war, with the archipelagic state’s most populous island, Malaita, supported by the United States and Taiwan. All of this is set against the country’s Beijing-supported prime minister and, according to some reports, the capital island’s ethnic population and local ethnic Chinese, including first- and second-generation immigrants.

This political mess is the fault of the United States, Australia, and their allies, who neglected the Solomon Islands to the point that Beijing could grow its influence there and so thoroughly exploit the islands economically and politically as to cause multivector ethnic violence that most recently likely resulted in three deaths in a Chinatown fire.

In 2017, the Solomon Islands signed a security treaty with Australia that it activated in response to the current crisis.

Now that Australia, New Zealand, Fiji, and Papua New Guinea are intervening—with hundreds of police, troops, and a navy ship—some analysts say that the intervention isn’t only too little too late, but on the wrong side, given that it supports a pro-Beijing government.

According to Chatham House fellow Cleo Paskal, the government’s corruption by Beijing, its instigation of the riots by firing at the peaceful protests that preceded them, and its vows to prosecute those supposedly behind the unrest can easily be extended to a more generalized attack on the pro-democracy elements of the island.

Alex Gray, former chief of staff at the National Security Council, said: “Canberra does not appear to be viewing the current unrest through the lens of China competition. The Sogavare government has proven itself an instrument of Chinese ambitions in the Pacific, and the Australian intervention will strengthen Sogavare’s hold on power in Honiara. While condemning the violence of recent weeks, Washington should recognize that this outcome is directly contrary to its interests.”

However, James To, author of a book on overseas Chinese, argued that the intervention was necessary.

“Canberra had no choice—it was bound by the treaty, and it needed to walk the walk, not just talk the talk when it came to demonstrating responsibility to the Pacific,” he said. “Anything otherwise would have undermined everything Australia has been trying to project as a regional power.

“The alternative for Canberra would have been unpalatable—if China were to grow its presence, influence, and activity across Canberra’s ‘patch.'”

Like Gray, Paskal is critical of Australia’s intervention, which she argued is against pro-democracy residents who seek to protect their rights to freedom of religion. She compared the unrest to Hong Kong.

“[The] CCP [Chinese Communist Party] gaining control of a country, even ‘if only’ by proxy, destroys economic growth for all but the elite and leads to greater and greater (and increasingly brutal) authoritarianism that thrives on cracking open domestic fault lines,” Paskal said. “Locals are left to either submit to an exploitative police state or risk their lives in trying to fight back.”

She called for stronger support for democracy globally.

“If the free world doesn’t come together now to support those fighting on the front line, the front line expands, the CCP gets more strategic access and resources, and we just end up fighting a better positioned and stronger CCP later,” Paskal said.

Paskal, Gray, and To are all right. Australia and allies should intervene to strengthen democracy and stop violence against local Chinese communities in the Solomon Islands. But in so doing, they should also remove any politicians complicit in Beijing’s growing influence. Sogavare, who supports Beijing, should be removed as complicit in terrorism. Diplomatic relations with Beijing should be cut, and a new election should take place.

When a state supports totalitarianism, it’s arguably a failed state and ceases to be legitimate (even if democratically elected), especially when the head of state is severed from popular support by authoritarian bribes. When states fail, their populations and other legitimate states (which by a Lockean definition must be democratic) should restore democracy.

Therefore, it’s the responsibility of Australia and its allies to intervene and gracefully ease Sogavare out of office so that true democracy can again flourish in the Solomon Islands.