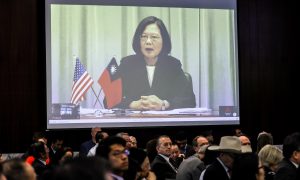 To Hold Onto Their Democracy, the People of Taiwan Need to Choose Well
0
Share Now
TelegramFacebookTweetEmailTellMeWeReddit
Copy Link 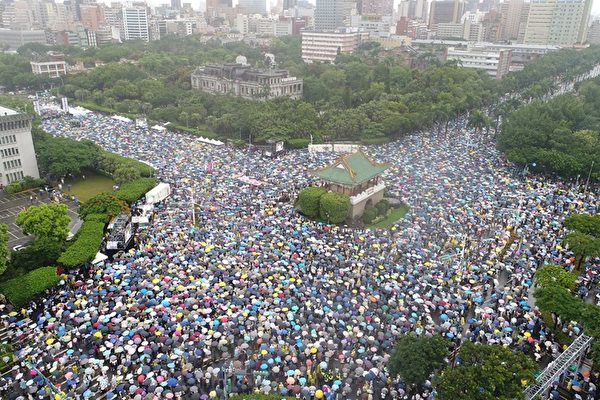 A huge crowd gathers in front of the Taiwan presidential palace on Ketagalan Boulevard on June 23, 2019. The crowd attended a "reject the communist media, protect Taiwan's democracy" event. (The Epoch Times)
Asia & Pacific

The infiltration tactics, which is at once both secretive and open, can be broadly divided into four categories. Among them, the most threatening is to construct an information supply chain through PR companies’ united front business for Taiwanese media.

Reporters Without Borders, an international NGO, has released its 2019 ranking of press freedom, ranking Taiwan as having the second-best press freedom in Asia only behind South Korea. In recent years however, taking advantage of Taiwan’s press freedom, the CCP has influenced the direction of media coverage in Taiwan through various channels, thus affecting the public perception of the CCP regime among Taiwanese residents.

In addition to the well-known methods of bribing media with advertisements and inviting journalists to visit China, the CCP has also used PR companies in recent years to comprehensively influence Taiwan media and strengthen the scale of its united front work. It also controlled channels in Taiwan’s public entities through special means to directly influence the people.

Method 1: Direct Control of the Media and Bribe Through Advertising

Yu Yingshi, a researcher at Taiwan’s Academia Sinica, said in a statement that the CCP’s campaign to influence public sentiment in Taiwan through the acquisition of media by Taiwanese businessmen has reached a blatant level.

In an interview with The Epoch Times, Zhang Jinhua, a professor at The Graduate Institute of Journalism at National Taiwan University, said the ways the CCP controls Taiwan’s media include direct control, ownership acquisition, and control of editorial staff, all in an effort to make them pro-communist.

The CCP has leveraged pro-communist businesspeople in Taiwan, making them its agents in Taiwan. “Under such circumstances, even if they are not CCP officials or members, they may be forced to act as their agents,” Zhang said.

In addition, after more than half a year’s investigation, the Control Yuan (one of the five branches of Taiwanese government) issued a report confirming that the communist government had purchased spots in Taiwanese newspapers by embedding news stories.

Wu Fengshan, a member of the council, has a copy of a contract detailing how China Times’ Beijing-based company specializes in soliciting advertisements from the CCP, and subcontracting them to other Taiwanese media, often with prices more than twice the market rate.

Zhang also said the CCP controls Taiwanese media with advertising interests. Many Taiwanese TV stations have difficulty marketing their programs. Many are afraid to offend the CCP in reporting due to their Beijing-funded advertisements. Political talk shows are also affected, not daring to criticize the CCP due to monetary pressure. Some programs even replaced staff who hold anti-communist views.

Zhang said that some TV stations had changed the hosts of political talk shows to please the CCP, which shows that its influence was not only over editorial content, but also personnel.

Xu Qinhuang, a senior media professional who’s long appeared as a commentator on financial and economic programs, confirmed that there are popular talk shows being threatened by their pro-communist advertisers. The shows’ advertisers have threatened to pull their ads should they continue their anti-communist editorial slant.

Xu said that in Taiwan this phenomenon of withdrawing advertisements has existed for a long time, but their scope has always been limited. Clients who withdrew advertisements were mostly large corporations doing business in China. However, in recent years, this phenomenon has become more prevalent. Many Taiwanese companies that have Chinese ownership have all threatened the media with withdrawing advertisements. The sales departments within such media put pressure on news departments, requiring their reporting to be free of unfavorable content to the CCP.

Method 2: Hosting Taiwanese Journalists in China and Influencing Them With Monetary Rewards

McCormick said about 50 journalists from 49 Asian and African countries attended a training camp in China. Over the course of 10 months, these journalists were placed in internships in select Chinese media and received monthly financial subsidies for food, entertainment, and other expenses.

According to “Intelligence Organizations and Espionage Activities of the CCP,” a book by Weng Yanqing, the lieutenant general and former Deputy Director of Taiwan’s Military Intelligence Bureau, the CCP considers media and journalists specifically as “spies.”

Weng said agents from the CCP’s Ministry of State Security tried to recruit foreign journalists living in China, often by contacting them using their personal names, offering to “provide classified information,” and then arresting them on charges of stealing state intelligence when they came to meet, coercing them to cooperate with the Ministry. The Ministry used these journalists to set up Chinese-language media outlets in Taiwan, or to conduct intelligence work of propaganda and covering up for the CCP.

Xu Qinhuang disclosed that there are indeed Taiwanese media professionals invited to China. According to his knowledge, their travel itineraries include attending seminars hosted by mainland Chinese companies, and the cost is covered by China. “This is the CCP’s united front work in Taiwan,” he said.

Zhang said journalists are invited to China by the CCP in the name of professional exchange, but there may be direct and indirect motives behind such travels. Many cross-straits media exchange platforms in Taiwan have been summoned to the other side for training. The CCP uses this channel to offer soft inducements.

It’s widely known that the CCP’s united front in Taiwan is divided into three categories: blue (online public opinion), gold (money) and yellow (sex). Xu said that “gold” is enough for most Taiwanese media because the entire industry is in a downturn. As long as journalists are given a stable income and career, their media coverage can be influenced.

The CCP’s methods of bribing Taiwan media have become even less visible in recent years. An insider pointed out that some Taiwan PR firms have in recent years contracted cases from private Chinese companies. Although the source of these cases isn’t official departments like the CCP’s Taiwan Affairs Office, according to what he knows, these private Chinese enterprises are proxies for the CCP. The Party can use these enterprises to invest money in Taiwan’s advertising companies, and indirectly, use these funds to influence Taiwanese media.

The insider disclosed that the cases contracted from China by these PR firms range from traditional TV media and print media, to online and social media like PTT and Facebook. PR firms advertise on traditional media for the CCP and help it host media visits to China, asking them to assist in publicizing the Party’s position in their reports.

At the same time, these PR firms also help review the positions of media outlets. In case a media has poor relationship with the CCP, they’ll ask their partners not to give the media advertising business. On the internet, these PR firms create various fan groups and fake accounts to write positive articles and comments on behalf of the CCP.

“I call this the industrial chain of the CCP’s information united front work in Taiwan,” said the insider. “In this system, the Party can control all elements to control Taiwan’s information, not only through media and internet, but also through PR companies in a coordinated way, handling all aspects like agents do.”

“The biggest threat posed by Taiwan’s communist-aligned media to the public lies in its presence of both tangible and intangible form,” said the insider. “These are only hints, but they show that the CCP is blatantly and openly using Taiwan’s freedom of speech to subvert Taiwan and force Taiwan to reunify with the Party.”

Hong Boxue, former editor-in-chief of a newspaper, published an article on Taiwan People News disclosing that in certain areas of Taiwan, TVs in public establishments such as snack bars, restaurants, small clinics, hotels, and other gathering locations often lock into a pro-communist local TV station. The owners of these stores told him that an unidentified group was paying them $500 a month to lock their channels onto the pro-CCP station.

Hong further explained in an interview with The Epoch Times that he had investigated countless such shops, finding that the group that pays the snack bars mostly targets the south-central region of Taiwan, and it chooses affordable restaurants rather than upscale ones.

What’s more, the political stance of shop owners is also a key point of the unidentified group’s consideration. It usually contacts shop owners who have little to no existing political stance. There are many people in Taiwan who have no pre-existing views regarding the Taiwan Strait relationship and thus are considered easier to influence.

“It’s like drugs. If you don’t sell them to people, no one will want it.” According to Hong, the logic behind “paying people” to watch the TV station is very simple. Channels that have been labeled as communist media won’t take hold if no one watches. Their purpose is to attract viewers, establish a certain viewership, and ultimately achieve its propaganda goals. “The money must be worth it. The effect of this collective penetration is very good. The CCP regards it quite effective, and it is.”