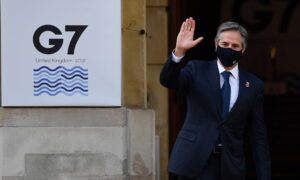 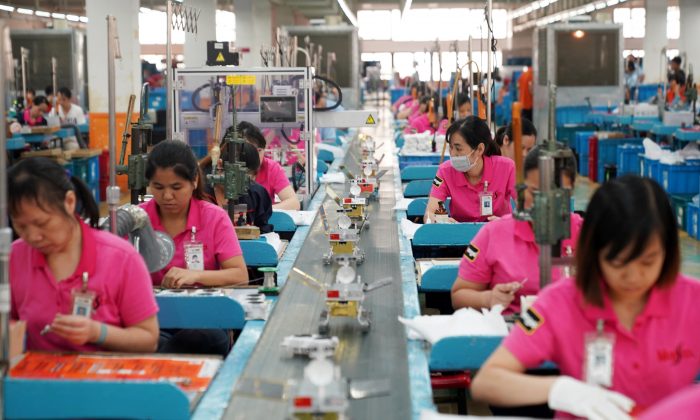 BEIJING—Profit growth at China’s industrial firms cooled for a sixth straight month in October as factory prices and the pace of sales increases softened amid mounting uncertainties stemming from the U.S.–China trade war.

The figures point to further weakening in China’s vast manufacturing sector and economy days ahead of a high stakes meeting between President Donald Trump and Chinese leader Xi Jinping, which Beijing hopes could avert a major escalation in their trade dispute.

China and the United States have slapped tariffs on billions of dollars of each other’s goods, hurting manufacturing and casting a shadow on the outlook for global growth.

Industrial profits rose 3.6 percent in October from a year earlier to 548 billion yuan ($78.92 billion), a seventh-month low and a slowing from September’s 4.1 percent gain, the National Bureau of Statistics said Nov. 27.

The slowdown was largely due to cooling factory-gate inflation and a high-base effect, bureau official He Ping said in a statement.

Some economists believe profitability will continue to deteriorate in coming months.

“As the economy slows, profits will only get worse before they get better,” said Yang Yewei, an analyst with Southwest Securities, who forecast an actual decline in 2019’s first quarter.

Nomura economists said the trend will remain down “given weakening domestic demand, already-high financing costs, rising credit defaults and the escalation in the China–U.S. trade conflict.”

Factory-gate inflation has been easing in recent months on sluggish demand, despite government efforts to shore up the economy, including a flurry of credit-easing measures to boost lending to private firms and ramp up infrastructure spending.

October’s profit data came out as worries about the U.S.–China war were deepened by Trump’s comments to The Wall Street Journal before his meeting with Xi Jinping in Argentina at the end of this week.

On Nov. 26, Trump told the newspaper it was “highly unlikely” he would accept Beijing’s request to hold off on increasing tariffs on $200 million of Chinese goods to 25 percent from 10 percent, as planned for Jan. 1.

China faces slower economic growth thanks to the trade war plus efforts to rein in financial risks and tackle pollution problems.

Upstream sectors such as mining and metal producers and state-owned enterprises still commanded the lion’s share of profit gains but their growth softened in October. Profit gains were concentrated in five industries, including steel and building materials.

Profits earned by state-owned enterprises grew 20.6 percent in October from a year earlier, from 23.3 percent in September.

For the first 10 months, profits for China’s industrial firms rose 13.6 percent from a year earlier, versus a 14.7 percent increase in January-September, Tuesday’s data showed.

At the end of October, industrial firms’ liabilities increased 5.9 percent from a year earlier to 63.7 trillion yuan ($1.96 trillion), according to the Statistics Bureau.