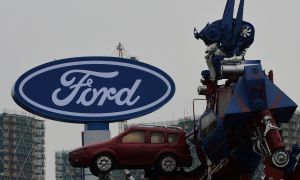 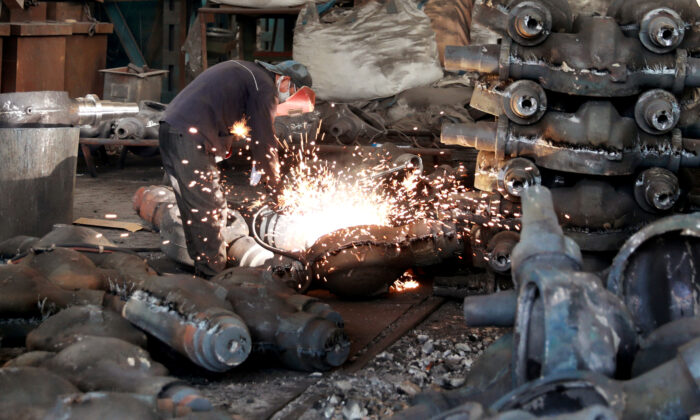 BEIJING—Profits at China’s industrial firms shrank at their fastest pace in eight months in October, tracking sustained drops in producer prices and exports and underscoring slowing momentum in the world’s second-largest economy.

Industrial profits fell 9.9 percent in October year-on-year to 427.56 billion yuan ($60.74 billion), data released by the National Bureau of Statistics showed on Nov. 27, marking the biggest drop since January-February period and compared with a 5.3 percent decline in September.

China’s industrial sector has been under pressure in recent months as slowing demand at home and the fallout from the Sino-U.S. trade dispute undercut earnings.

“Profit growth is expected to stay negative for a period of time in the future, likely prompting authorities to unveil more growth-boosting measures in a gradual and restrained way.”

Profit declines for the manufacturing sector deepened in October, as margins contracted by 4.9 percent in the January-October period, compared with a 3.9 percent drop in the first nine months of the year. Meanwhile, mining sector profit growth also moderated.

For January-October, industrial firms’ profits fell 2.9 percent from a year earlier to 5.02 trillion yuan, compared with a 2.1 percent decline in January September.

China’s producer price index, seen as key indicator of corporate profitability, posted its sharpest fall in more than three years in October as prices for raw materials weakened. The country’s official manufacturing PM also showed a contraction in activity for the sixth straight month in September with new export orders falling for their 17th straight month.

China’s exports fell in annual terms for the third straight in October, albeit at a slower-than-expected rate.

Despite recent signs of progress in trade negotiations, there is growing uncertainty about whether Beijing and Washington can reach an agreement that would put off another U.S. tariff hike on Chinese goods scheduled to take effect on Dec 15.

“We expect industrial profit growth to remain sluggish, given the deteriorating growth outlook and elevated uncertainty amid the U.S.-China trade conflict,” said Nomura analysts in a note to clients after the data release.

With growth at near 30-year lows, China’s central bank has recently lowered some of its key lending rates while its governor has pledged to step up credit support and lower funding costs to help those parts of the economy that have struggled with financing.

China’s central bank warned on Monday of increasing downside risks for the economy as growth continues to falter despite various fiscal and monetary stimulus introduced this year.

A Reuters poll of analysts tipped China’s growth to slip to a near 30-year low of 6.2 percent this year and then ease further to 5.9 percent in 2020, underlining the challenges faced by Beijing.

Industrial firms’ liabilities increased 4.9 percent from a year earlier to 66.74 trillion yuan at end-October, compared with a 5.4 percent increase at end-September.

The data covers firms with more than 20 million yuan in annual revenue from their main operations.