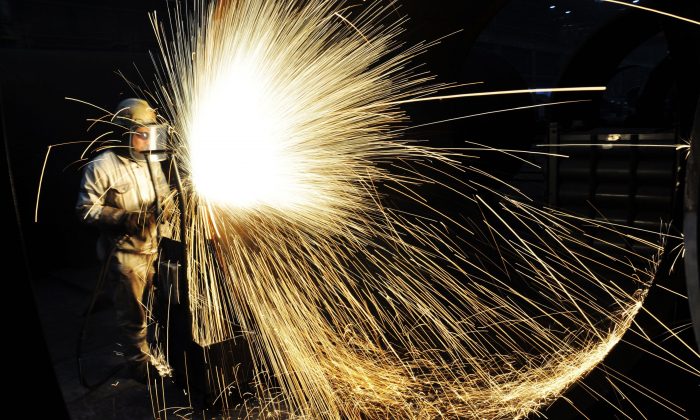 The slowdown was in line with data two weeks ago that showed September’s factory output grew at the slowest pace since February 2016.

Industrial profits rose 4.1 percent in September from a year earlier to 545.5 billion yuan ($78.57 billion), the National Statistics Bureau (NBS) said on Oct. 27. That was less than half of the pace in August, and the slowest since March.

Earnings in September were mainly pressured by a greater slowdown in production and sales, declining price growth, as well as a high statistical base a year earlier, statistics bureau official He Ping said in a statement accompanying the data.

An escalating trade war with the United States has also added to the pressure on overall output, and threatens to chill business investments and earnings growth in the months ahead.

Data two weeks ago showed the Chinese economy in the third quarter grew at the weakest pace since the global financial crisis as manufacturing output slowed.

The manufacturing sector also has been squeezed by a reduction in sources of credit amid Beijing’s multi-year crackdown on corporate debt and risky lending practices.

While authorities are taking steps to ease pressure on firms with liquidity issues, many companies still face difficulty in obtaining funding. Interest rates on loans have also risen due to the reduced supply of credit.

Softer infrastructure investment despite Beijing approving more projects in the second half this year has also added pressure on the bottom-lines of industrial firms.

But the growth slowed from the 16.2 percent pace seen in the January–August period.

Industrial firms’ liabilities rose 6.1 percent from a year earlier by the end of September to 63.1 trillion yuan (about $9 trillion), compared with an increase of 6.6 percent by end-August.

The statistics bureau’s data covers large companies with annual revenues of more than 20 million yuan ($2.88 million) from their main operations.

With other indicators, China’s economy showed signs of trouble. On Oct. 26, the yuan hit a fresh 22-month low of 6.9647 against the dollar.

Traders expected that the tightly managed, partially convertible currency would soon be testing 7 per dollar, a level unseen since the global financial crisis a decade ago.

The yuan has lost more than 6 percent versus the dollar this year, partly reflecting its slowing economy and pressure on exports due to an ongoing tariff war with the United States.