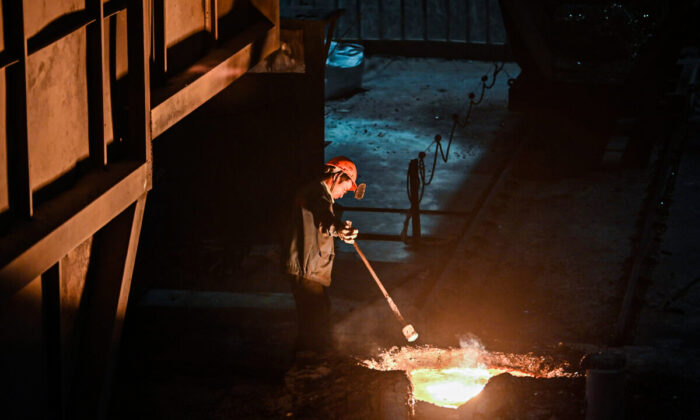 A worker extracts a sample of molten metal during a government organised tour at a Tiangong International plant, makers of high quality steel and tools, in China's eastern Jiangsu Province on Oct. 12, 2020. (Hector Retamal/AFP via Getty Images)
China Business & Economy

Since the beginning of this year, profits have climbed 38 percent on-year to 7.98 trillion yuan by the end of November, slower than the 42.2 percent rise in the first 10 months of 2021, according to China’s National Bureau of Statistics (NBS).

“Companies still face great cost pressures, and the improvement in profits for downstream sector needs to be further consolidated,” Zhu Hong, a senior statistician at NBS, said in a statement accompanying the data release.

Although fuel providers saw their profits rise in the past 11 months, some up to about 4 times higher, energy producers including those of electricity and heating, are bearing the profit shrinkage, with margins squeezed by the high cost.

People in the northwest Chinese city of Xi’an have also been struggling to get food and supplies since authorities ordered a lockdown of the city of 13 million people last week due to a spike in cases of COVID-19. China’s local daily infections have spiked to a record high over the weekend since the outbreak in early 2020, based on reported cases by authorities.

The country’s property distress has also hurt the steel sector while production of cement, glass, and household appliances remains vulnerable to falling demand.

At a key agenda-setting meeting this month, China’s top leaders pledged to stabilize the economy and keep growth within a reasonable range in 2022. The country’s central bank on Dec. 6 announced a cut to the amount of cash that banks must hold in reserve, freeing more cash for lending, while lowering the one-year benchmark lending rate to stimulate growth.

The industrial profit data covers large firms with annual revenue of over 20 million yuan ($3.1 million) from their main operations.