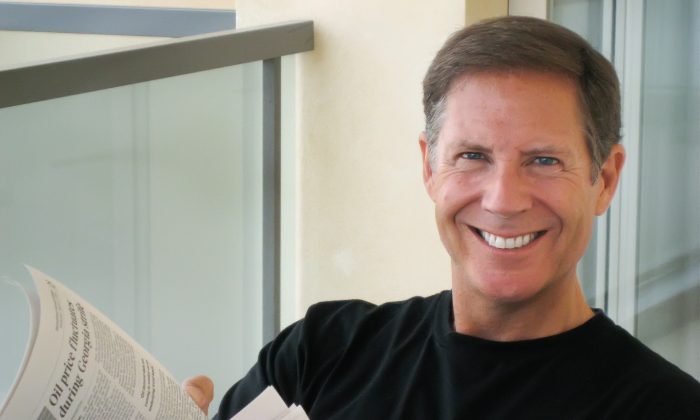 Three politicians die in fear as their car, controlled by an unseen hacker, charges onto the White House lawn and into a line of armed Secret Service agents. In his final moments, one of the men texts his son, a hedge fund manager in New York, a single word that could unravel a sinister plot to destroy the U.S. economy and bring the country to its knees.

So begins “The Prince of Risk,” the latest novel by bestselling author Christopher Reich. While the story is fiction, it’s haunting theme hits uncomfortably close to home. The novel plays on the Chinese Communist Party’s real-world use of industrial espionage and imagines what would happen if it were able to continue unchecked and unchallenged.

Reich said that the idea for the story came from a discussion with a good friend who had recently retired as a head of security in Wall Street and was the former head of the Secret Service Presidential Protection Detail.

“He was telling me about the measures they have to take when the head of the New York Stock Exchange goes over to China, which he visits once in a while,” Reich said.

The story relayed to him was one of global intrigue—a foreign nation seeking to sap the intellectual and financial prowess of the United States. There were elaborate countermeasures for foreign spies, computer hackers, scores of odd characters, and plots by foreign powers fit for a Hollywood villain.

He said agents needed to check Chinese hotel rooms for listening devices, guard cell phones and computers from remote or local hackers, and even prevent briefcases from having their contents removed, duplicated, and returned, without the owner’s knowledge.

“When they go to China they expect to be eavesdropped on and constantly surveilled, 24/7,” Reich said. The same threats await in China for traveling politicians and heads of major corporations, he was told.

Reich decided to do his own research, and this raised a set of new questions. Why would the Chinese Communist Party aim its espionage departments on heads of finance and traveling businessmen? What interest would China have in using its cyber army to steal intellectual property from American businesses?

Reich pieced together the answers from his research and his own experience as an investment banker in Hong Kong.

In China, he said, “Counterfeiting is not considered a moral crime. It’s almost to be applauded.”

“As their system of capitalism grew in China, copying other people’s products was really the backbone of their industry,” he said. “It’s not a big jump from making a product for someone else, to just stealing their design and saying it’s your own.”

Combine the lax mentality towards counterfeiting with a culture where business is warfare, run by the state, and the plot thickens. This is where the constant reports of China’s cyberespionage against U.S. businesses come into play.

Reich said the situation is that “you have a Chinese company, at the direction of their own intelligence firms” hacking into companies and stealing intellectual property. This is mass stealing of the stuff of innovation—economic warfare meant to create a brain-drain at the very core of the U.S. economy.

Theft of intellectual property, Reich said, can be a distant concept for people, but the impact is tangible. “It’s not like stealing a car and you see your car is gone,” he said. “You’re stealing ideas, you’re stealing the ability to generate revenue, which is even more important.”

In his novel, Reich combines creative freedom with plausible real-world threats. While researching the story, he spent close to 10 days visiting the New York Counterterror Office of the FBI. These meetings became fuel for some of the terror and cyberterror elements in the novel.

One scene is of a terrorist attack in New York City, reminiscent of the 2008 attacks in Mumbai when up to 26 terrorists killed close to 166 people and wounded close to 600 in shooting and bombings. Another imagines the playing out of a “cyber Pearl Harbor,” where Chinese hackers launch a major cyberattack on critical systems across the United States.

“The Prince of Risk,” shows that terrorism is not limited to religious ideologues, and can also be used as a tool for international power politics. It shows too that in the digital world we’ve created the nature of warfare has changed forever.

“Battlefields and machine guns are becoming things of the past,” Reich said. “Warfare now is being conducted by computers and cyber warriors in this kind of neverland that nobody can see, but which is powering our lives more and more every single day.”