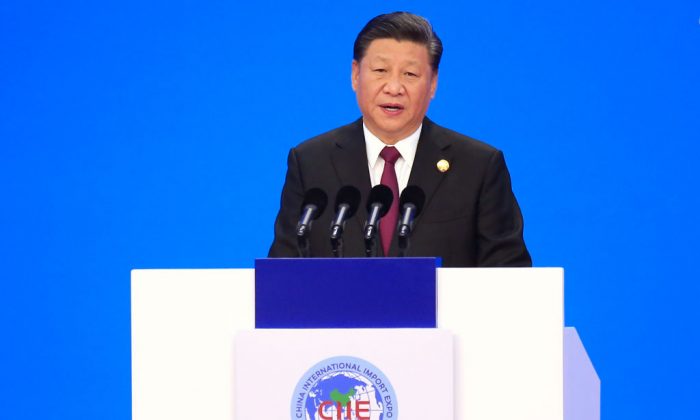 The Chinese regime recently opened its first international import expo, to much fanfare.

The event, however, has drawn criticism as being a propaganda stunt to quell international concerns about China’s trade practices and make the Chinese regime appear eager to narrow trade gaps. Behind the many celebrated trade deals signed so far at the six-day event are economic problems that China has failed to address.

The China International Import Expo (CIIE), which began in Shanghai on Nov. 5, has brought together more than 3,600 companies from 172 countries, regions, and international organizations, with the goal of winning orders from Chinese buyers, according to China’s state-run media Xinhua.

Chinese leader Xi Jinping, speaking at the opening day of the event, promised that China would take further steps to open its markets by lowering tariffs and expanding imports, according to Xinhua.

Xi added that he expects that Chinese imports of goods and services will surpass $30 billion and $10 trillion, respectively, within the next 15 years. The figures were an increase from estimates that Xi gave last November while delivering a speech at the Asia-Pacific Economic Summit (APEC) Summit. At the time, he said China would import $24 trillion worth of goods in the coming 15 years, according to Xinhua.

Many foreign companies have signed deals. FAW-Volkswagen Automotive, a joint venture between China’s state-owned FAW Group and German automaker Volkswagen AG, signed a memorandum of cooperation under which the venture will import parts and vehicles, worth about 62 billion yuan (about $8.96 billion), from Volkswagen, according to Reuters.

The hype surrounding the expo might be overblown, given the short list of guests from foreign countries. According to a Nov. 5 Reuters report, presidents or prime ministers from 17 countries are attending the expo, ranging from Russia and Pakistan to the Cook Islands, though none from major Western nations. No U.S. officials are set to attend.

Some Western diplomats and businesses have been quietly critical of the event, arguing it is window-dressing to what they see as Beijing’s long-standing trade abuses, according to Reuters.

Representatives from several countries spoke of their concerns about their countries’ trade imbalances with China.

Kenyan President Uhuru Kenyatta said that the country’s trade was “heavily skewed” in Beijing’ favor, adding that it was important to correct the existing trade imbalance, according to AFP.

Vietnamese Prime Minister Nguyen Xuan Phuc also brought up his country’s trade deficit with China, which reached $22.8 billion in 2017, according to the Vietnam News Agency. To address that imbalance, Phuc asked for more distribution channels in China for his country’s farm and fishery products.

Meanwhile, ahead of the event, the city of Shanghai has been placed under semi-lockdown, with heavy police presence on the streets, according to a Nov. 5 article by Radio Free Asia (RFA).

Wang Zongze, a democracy activist in Shanghai, told RFA that while riding the metro on Nov. 4, he saw heavy security throughout the metro system. According to Wang, one of the busiest subway stations, People’s Square Station, was guarded by civilian law enforcement personnel as well as military police.

Ma Yalian, a petitioner living in Shanghai, said the police visited her days before the event, in a recent interview with RFA. Petitioners are ordinary citizens who appeal to China’s central authorities about their grievances; such petitioning is a tradition that dates back to ancient China, when citizens would travel to the capital and plead with officials of the imperial court as a last resort to seek justice.

Ma added that two of her friends, also petitioners, were walking in the Lujiazui financial district in Shanghai on Nov. 4, when police stopped them and asked for their ID cards; soon after, they went missing. Ma became a petitioner after her home was demolished by local authorities in 1999 to make room for new development. For her petitioning efforts, she has been sent to labor camps at least twice.

Petitioners often face arrest and harassment, especially leading up to major international events or Communist Party political conferences. They are often targeted by police due to Chinese authorities’ fear that they may “cause a scene” with their protests and disturb the country’s “social stability.”

Black jails are extralegal detention centers for holding petitioners, without due process of the law.

On China’s social media, netizens shared that even express delivery services in Shanghai were suspended ahead of the expo.

One male petitioner was able to evade heavy security surrounding the expo and tried to stop a motorcade carrying dignitaries, before he was whisked away by the police, according to videos obtained by the Chinese-language Epoch Times.

Ms. Wang, a resident in Shanghai, later confirmed with The Epoch Times that the unidentified petitioner is a victim who lost his investments in peer-to-peer (P2P) lending platforms that recently collapsed.

P2P platforms allow people to lend to each other while earning high-interest rates—higher than those offered by banks. Since April, thousands of P2P online financial platforms in China have crashed, devastating the industry and leaving millions of investors in financial ruin.