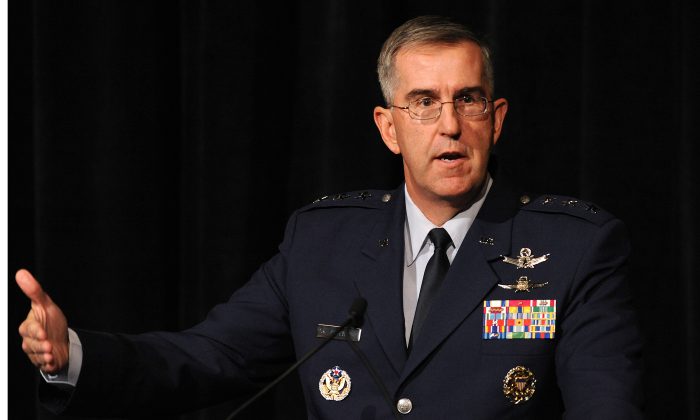 China’s Hypersonic Weapon Could Be for Nuclear ‘First-Use’: Pentagon No. 2

The Chinese regime’s fielding of a new hypersonic weapons system might indicate that the nation is shifting away from its pledge of not using nuclear weapons first in a potential conflict, according to the Pentagon’s second-highest-ranking officer.

“They look like a first-use weapon,” Joint Chiefs of Staff Vice Chairman Gen. John Hyten said during an interview with CBS. “That’s what those weapons look like to me.”

The comments by Hyten, who is due to retire this week, referenced the test of a nuclear-capable hypersonic glide vehicle with an orbital bombardment system back in late July, which reportedly caught the U.S. intelligence community by surprise.

“They launched a long-range missile,” Hyten said. “It went around the world, dropped off a hypersonic glide vehicle that glided all the way back to China, that impacted a target in China.”

The system is of concern because the United States’ current early warning systems were designed to detect traditional intercontinental ballistic missiles (ICBMs) and not hypersonic glide vehicles (HGVs).

“We just don’t know how we can defend against that technology,” said U.S. disarmament ambassador Robert Wood at a press meeting in October.

That’s because ICBMs work by arcing out of and back into the atmosphere in a relatively straightforward parabolic trajectory.

HGVs, however, are fired into space by rockets or ballistic missiles and then released to glide to their target along the upper atmosphere. They fly at a lower altitude than ICBMs and can change their intended target and trajectory repeatedly during their flight, effectively thwarting current defense systems once in orbit.

Similar concerns that Beijing’s pursuit of hypersonics capability may signal a shift away from China’s long-standing nuclear weapons policy of no first use were made by a report released earlier in the week.

The new report by the U.S.–China Economic and Security Review Commission warned that the Chinese Communist Party could be covertly moving away from its long-held policy of “no first use,” which prescribes that the weapon would only be used in response to an aggressor’s first strike.

Some indicators that this may be the case, the report said, include debates within the Chinese military about the viability of first use, the regime’s buildup of new nuclear weapons, and its recent adoption of launch-on-warning protocols, meaning that it will launch nuclear counterstrikes against suspected nuclear aggressors before verifying that a first strike actually occurred.

“China’s nuclear posture could also support a more ambitious nuclear strategy that envisions the limited first use of nuclear weapons as a legitimate means of achieving China’s political objectives in the region,” the report said.

“Such a strategy would be consistent with important, if officially marginalized, Chinese intellectual debates that took place in the past over how China could use nuclear weapons to prevail in wars and whether it should discard the no-first-use policy.”

Secretary of Defense Lloyd Austin downplayed the threat posed by hypersonic weapons at a press conference on Nov. 17, saying that the U.S. military was moving as fast as it could and maintained its advantage over China.

“We continue to move as fast as we can to develop capabilities,” Austin said. “And again, we look at a full range of capabilities and not just one specific capability as we look at our adversaries.”

“I believe we have robust capability across the board,” Austin said.

They were also in contrast to other remarks delivered by Hyten in late October, when he said that U.S. military efforts to counter China were hamstrung by a “brutal” bureaucracy at the Pentagon, which caused weapons platforms to take as long as 20 years to develop.

Hyten said at the time that the United States had been developing a similar hypersonic system in 2011, although risk-averse leadership scrapped the project.

In the decade since, China conducted hundreds of hypersonics tests, Hyten said. Meanwhile, the United States has carried out nine.

“The pace [China is] moving and the trajectory that they’re on will surpass Russia and the United States if we don’t do something to change it,” Hyten said.