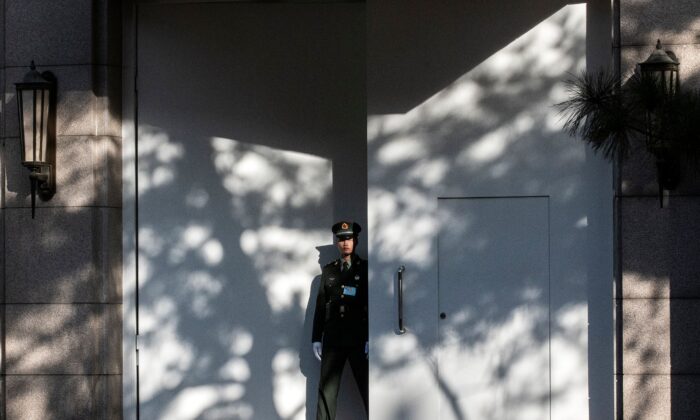 A Chinese paramilitary soldier secures an entrance of Jingxi hotel where the fourth plenary session of the CCP is being held in Beijing on Oct. 28, 2019. (Nicolas Asfouri/AFP via Getty Images)
National Security

'Americans should be on guard'
By Bowen Xiao
biggersmaller
Print

Popular outrage in response to the recent case of Christine Fang, a Chinese national who gradually gained political access and power through romantic or sexual relationships with at least two mayors, indicates that many Americans are unaware that this is a common tactic used by the Chinese Communist Party (CCP).

The term for this is “honey trapping,” which may sound like something from a Hollywood spy movie, but is a well-developed espionage strategy used widely by the CCP.

Honey traps are a serious risk with regard to the loss of sensitive or classified information, and particularly its use for blackmail. American politicians in different positions of power, including those in the intelligence community and especially members of Congress, are all prime targets, experts say. The prevalence of such incidents is believed to be underreported due to their sensitive nature.

According to Axios, which broke the story on Fang, she was believed to have helped place “unwitting subagents” in local political and congressional offices, but it was unlikely that she herself received or passed on classified information. Nonetheless, she collected private information about U.S. officials. Fang also targeted Rep. Eric Swalwell (D-Calif.) and appeared to have became close with him before federal investigators alerted Swalwell to their concerns in a defensive briefing.

“The ‘honeypot tactic’ is the oldest trick in the book,” Rep. Jim Banks (R-Ind.) told The Epoch Times.

“Swalwell’s gullibility and recklessness should disqualify him not just from a seat on the House Intelligence Committee, but also from being a member of Congress as well,” he said.

Chen Yonglin, a former senior diplomat at the Chinese Consulate in Sydney, Australia, who defected in 2005, claimed China was operating a network of “over 1,000 Chinese secret agents and informants in Australia.”

Sex and money are often used as bait, he says. The honey trap is a favorite tactic of Chinese intelligence to try to compromise an official. Chen says that while he was in office, one Australian official on a visit to China was detained by authorities after he was caught having sex with a minor girl. They released the man, keeping evidence of his affair, after he “offered to work for the regime, similar to an agent,” Chen says.

Honey trapping is just one tool in a broader arsenal used by the CCP to politically influence the United States and gain intelligence, according to Timothy Heath, senior international defense researcher at RAND Corp.

Heath was previously a senior analyst at the China Strategic Focus Group at U.S. Pacific Command.

“I’ve heard American scholars and others who visited China have been approached by attractive young women and solicited,” he said. “In most cases I’m aware of, these Americans received briefings from intelligence warning them about this.”

CCP agents, for example, might use a honey trap to seduce a U.S. intelligence official or some other official into providing sensitive information, Heath said. The CCP agents would then turn around and blackmail the victim to get more.

While it’s nearly impossible to pinpoint the exact number of honey traps that could be occurring in the United States, an unnamed former defense and intelligence operative told Fox News it could be well into the hundreds, if not thousands.

More than a decade ago, Ian Clement, the former deputy mayor of London, warned the public about the tactic after he himself fell victim to it.

When Clement traveled to the Beijing Olympics in 2008 as London’s deputy mayor, he had been briefed by Britain’s intelligence service. But he failed to take heed.

“They told me about honey traps and warned me that the Chinese secret service often use women to entice men to bed to get information. I didn’t think for one minute that I would fall for it,” Clement told the Mirror.

Clement said an attractive Chinese woman he met at a party likely spiked his drink. After he’d passed out, she went through his room, collecting information about London’s operations and business dealings.

“While I was in Beijing, I was making planning decisions from my BlackBerry. We’re talking major, major decisions,” he told the outlet. “They wanted to know which businesses I was courting.”

And in one case in 2011, South Korean authorities revealed that more than 10 South Korean diplomats working in China had sexual relations with a Chinese woman called Deng Xinmin, who was able to extract key intelligence information from them.

Eftimiades said the Christine Fang operation was “beautifully handled” in the way it combined both intelligence gathering and political influence. It’s a strategy that “can really be devastating to another country.”

Congress members, who are entitled to access classified information but aren’t required to have security clearances, have been particularly vulnerable to covert influence and spying efforts for decades, Eftimiades said.

A former Chinese official who later defected to Canada said the CCP uses a number of tactics to gather intelligence. Guangsheng Han, who spent 14 years as head of the Public Security Bureau and another five years with the Judicial Bureau in China, said that all over China, “there are hotels designated for foreigners to stay.”

“For these designated hotels, there are certain rooms that have monitoring capability,” he told The Epoch Times. “So when guests who have certain identities check in, they were put in these rooms.”

Hunter Biden, son of Democratic presidential nominee Joe Biden, said on Dec. 9 that he was being investigated by the U.S. Attorney’s office in Delaware over his tax affairs. He didn’t elaborate on the nature of the investigation, but it’s been widely reported that some of his Chinese business dealings and other transactions were under scrutiny by the Justice Department.

In October 2020, lawyer Rudy Giuliani alleged that there was “sensitive” material on a laptop belonging to Hunter Biden, including pictures of minor girls. Giuliani told Newsmax he had turned the laptop over to the authorities.

Giuliani also said the CCP had seen the Hunter Biden material, telling Steve Bannon’s “War Room: Pandemic” podcast that everything Americans have seen, “China’s been looking at for a long time.”

“If the Chinese government doesn’t have these photographs, they’re not really a rival,” Giuliani said.

According to Seamus Bruner, a researcher who focuses on government integrity and who was provided access to emails between associates of the Bidens, Hunter Biden was viewed “as a pipeline to the administration” by the associates. The Bidens have denied any wrongdoing.

Director of National Intelligence John Ratcliffe wrote in a Dec. 3, 2020, op-ed in The Wall Street Journal that in 2020, “China engaged in a massive influence campaign that included targeting several dozen members of Congress and congressional aides.”