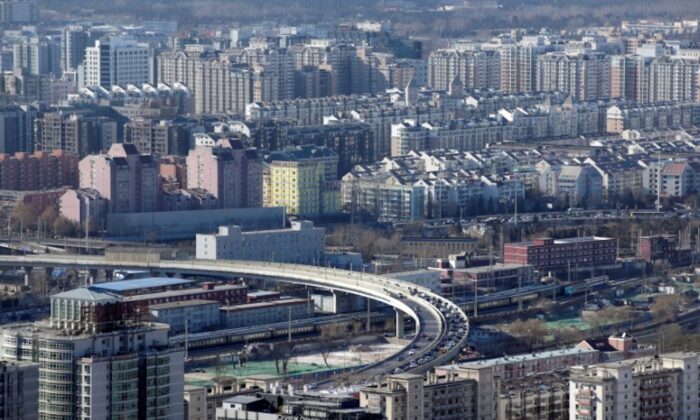 Residential buildings are seen in Beijing, China, on Jan. 10, 2017. (Jason Lee/Reuters)
By Reuters

BEIJING—China’s new home prices grew at their weakest pace in 17 months in December, with broader curbs on the sector continuing to cool the market in a further blow to the sputtering economy.

Average new home prices in China’s 70 major cities rose 6.6 percent in December, slowing from a 7.1 percent gain in the previous month, Reuters calculation based on National Bureau of Statistics (NBS) data on Jan. 16.

It was the slowest pace since July 2018, and significantly weaker than the 9.7 percent gain seen in December 2018.

Price trends have been mixed lately, as authorities try to reduce frothiness in some cities and relax rules in others in an effort to foster stability in a sector seen as a pillar of the world’s second-biggest economy.

Many analysts are forecasting a further slowdown in the market.

Zhang said the NBS data did not fully reflect the downturn in some markets, including in the Chinese capital Beijing, where inventory is at a multi-year high.

“In a downward cycle, most cities’ government-mandated price caps on new launches have been lifted, and that would mean even as overall demand has cooled, prices would still somehow show stronger growth on paper,” he said.

All the same, home prices still marked the 56th straight month of gains, even as China has clamped down on property speculation since 2016 to stop home prices from overheating. With the pace of China’s economic growth slowing, policymakers are keen to avoid wholesale squashing of the property market.

There has been some signs of improvement in demand and prices across the sector since late last year as trade tensions with the United States eased.

In the latest sign of warmer ties, the world’s two largest economies signed an initial trade deal on Wednesday that will roll back some tariffs and boost Chinese purchases of U.S. products, although a number of sore spots remained unresolved.

China’s economic growth hovered at its weakest in 29 years in the fourth quarter as demand at home and abroad remained sluggish.

Most of the 70 cities surveyed by the NBS still reported monthly price increases for new homes, with the number up to 50 from 44 in November in a sign of some broadening strength in the market.

“It suggests property developers’ year-end sales may have not been that bad at all after running persistent promotion campaigns,” said Yan Yuejin, director of the E-house China Research and Development Institution in Shanghai.

On a month-on-month basis, home prices edged up 0.3 percent in December from the previous month, unchanged from the pace in November.

Beijing has been calling for more targeted city-based policies to foster market stability. Analysts say any sharp drop in home prices would likely not be tolerated by local governments.

Some cities in the past months moved to relax rules by making it easier for graduates to get coveted household registration permits or lowering the requirements for eligible home buyers.

China’s southern province of Guangdong said on Tuesday it will ease the residential permit in all its cities except the powerhouses of Guangzhou and Shenzhen.

The so-called tier-3 cities outperformed other city-tiers by rising 0.6 percent on a monthly basis, quicker than November’s 0.5 percent gain, the statistics bureau said in a statement accompanying the data.

Yangzhou, a city of 4.6 million in eastern China’s Jiangsu Province, was the top price performer in the month, with its price increasing 1.3 percent on a monthly basis.

Meanwhile, price growth in China’s four top-tier cities—Beijing, Shanghai, Shenzhen and Guangzhou—slowed from a 0.6 percent gain in November. They rose 0.2 percent from a month earlier.

Tier-2 cities, which include most of the larger provincial capitals, increased 0.3 percent in December on a monthly basis, slightly higher than a 0.2 percent gain in the previous month.