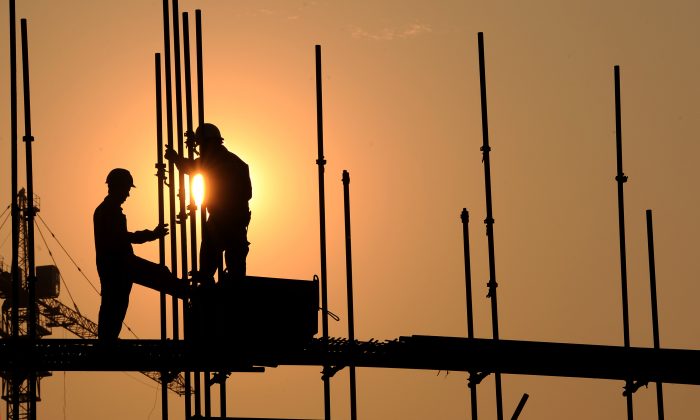 Experts and economic institutions found that the mainland enterprises debt to GDP ratio is the highest in the world. This figure is considered unusually high, and studies suggest the three signs of the financial crisis have already appeared. (STR/AFP/GettyImages)
China

China’s unsustainable corporate debt to GDP ratio is the highest in the world, and experts conclude that all three signs portending financial crisis have already appeared.

This figure is doubted by some, but other analysts present a similar conclusion. China’s total corporate debt amounted to 108 percent of the GDP in 2011, rising to 122 percent of the GDP in 2012, a 15-year high, says GK Dragonomics in a November 2012 economic analysis published in Bloomberg Business Week, titled “Corporate China’s Black Hole of Debt.”Even research by Chinese experts reaches comparable conclusions. Studies by Liu Yuhui, finance expert at the Chinese Academy of Social Sciences, indicate that non-financial sectors in the Chinese economy, which include government, enterprise and residential sectors, account for 114.8 trillion yuan ($18.54 trillion) in debt. This is equivalent to 221 percent of 2012’s GDP of 51 trillion yuan ($8.38 trillion), according to an April 8 report by First Financial Daily.

Whether the real ratio is 151 or 122 percent, economists are in agreement that such a high percentage is unsustainable. Corporate debt in China as a percentage of GDP has far exceeded the acceptable amount in any advanced economic system, which is about 50 to 70 percent. From an economic perspective, this high leverage ratio has resulted in serious economic problems.

However worrisome, these data do not tell the whole story. According to an April 9 report by China Times, financial expert Liu Yuhui said the profitability of Chinese industrial enterprises (net profit in total revenue) is only about 5 to 6 percent, half the global average, while the average corporate debt in China is about 3 to 4 times of the global standard.

“Companies have seen their business slowing down and revenues were not what they had expected. They have bridged the gap by taking on more debt,” says GK Dragonomics Research Director Andrew Batson, according to Bloomberg.

In order to hide these signs, the Chinese regime has been expanding the credit market to stimulate the economy.

Additionally, relying on exports and unregulated investments (such as real estate development) to propel economic growth has resulted in a twisted economic structure. Wen Jiabao, the former premier, famously said that China’s growth is “unbalanced, uncoordinated, and unsustainable.”

Former Minister of Finance Xiang Huaicheng said during high-level economic leadership talks at the 2013 Boao Forum that local government debt had reached 20 trillion yuan ($3.23 trillion), according to an April 7 report by China News.

Even though Xiang did not admit it, another Chinese economist, Hu Zuliu, pointed out during the Boao Forum that China will be the place where the global debt crisis begins 21st Century Business Herald reported the same day.

Economist Larry Lang believes that the financial crisis and the banking crisis have already begun in China. In August 2012, Lang listed eight major crisis situations that were waiting to explode. These crises include excessive resource use, excess production capacity, debt crisis, inflation, and the banking crisis.

Translation by Frank and Sophia Fang. Written in English by Carol Wickenkamp