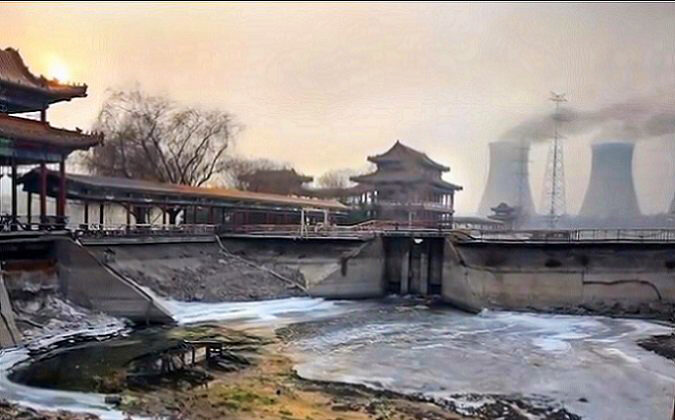 Water pollution from antibiotics in China poses a serious threat to the environment and human health. The picture shows a river located in an industrial area. (Video screenshot by The Epoch Times)
Analysis

Chinese manufacturers produce over 200,000 tons of antibiotics each year for use by the pharmaceutical, healthcare, agriculture, and aquaculture industries. While antibiotics are essential, effluent from the manufacturing factories and overuse in China are polluting the environment, causing antibiotic resistance, and endangering people’s lives.

One of the more serious outcomes of China’s massive use of antibiotics is water pollution.

China’s largest and most severely polluted river is the Yangtze. A 2020 study by Hehai University’s Yangtze River Protection and Green Development Institute found the average concentration of antibiotics in the river had reached 156 nanograms per liter (ng/L). This is much higher than concentrations in the United States and countries in Europe. It also found that antibiotic manufacturing waste in the lower reaches of the Yangtze River were among the highest in China, with an annual emission intensity of about 60 kilograms per square kilometer (kg/square km).

The study suggests the Yangtze River’s pollution comes from contaminated wastewater containing high concentrations of antibiotics that is released by pharmaceutical factories and hospitals. For example, in one city, the outfalls from three of these facilities are located only a few kilometers upstream from drinking water sources. In addition, there are six outflows from pharmaceutical factories at the confluence of several Yangtze River tributaries. As a result, according to a survey, antibiotics have been detected in the urine of about 40 percent of pregnant women and 80 percent of children in the Yangtze River Delta basin.

Recently, a research paper published in Environmental Science & Technology magazine showed that one of the Yangtze River tributaries, the Huangpu River in Shanghai, contained not only antibiotics but also residues of cardiovascular and lipid-lowering drugs.

On Feb. 23, Zhang Kun, an associate professor of environmental science with Shanghai Jiaotong University released his latest research paper on drugs found in 27 sampling sites along the Huangpu River. Zhang’s paper identified a total of 14 antihypertensive drugs, one anti-arrhythmic drug, and four lipid-lowering drugs. Among them, anti-hypertensive drugs and narcotics were detected in 100 percent of the samples. He said, although Shanghai’s wastewater treatment rate reached 96 percent, China’s current effluent standards for wastewater treatment plants do not address the presence of pharmaceuticals and personal care products (PPCPs) as a routine indicator.

In an interview with The Epoch Times, Mr. Gao, a professor of environmental protection with China’s Yanbian University, said the Chinese Academy of Sciences has confirmed the presence of antibiotic pollution in China’s major rivers, with an average concentration of 303 nanograms per liter nationwide, not just in the Yangtze River. He referred to China’s polluted river water as “medicine soup.”

Mr. Gao claimed that Chinese antibiotic manufacturers are reaching their profit goals by not investing in environmental safety as they should. A standard practice in developed countries is to include environmental protection expenses in their costs, but Chinese manufacturers do not.

In June 2021, Phoenix Financial reported that experts found alarming results when testing the discharge of sewage from the Harbin Group Pharmaceuticals General Factory. The results confirmed the presence of ammonia nitrogen, hydrogen sulfide, formaldehyde, phenol, cod, carbon disulfide, and other chemicals in amounts that were several times over the national standard.

Effect of Antibiotics in the Aquatic Ecosystem

Zheng Huidong, deputy director of the Center for Disease Prevention in Huizhou, China, published a study in the Journal of Environmental Health stating that China produces 210,000 tons of antibiotics each year, of which 48 percent is used in the livestock and poultry breeding industry and 42 percent in the pharmaceutical industry. This massive use of antibiotics has contaminated the water and endangered the ecological environment as well as people’s health.

Huidong’s study says the average level of drug content in the effluent of three sewage treatment plants in Hong Kong and Guangzhou alone, was higher than in the United States and some countries in Europe.

Wan Hua (pseudonym), a 36-year veteran of China’s healthcare system, told The Epoch Times that “China accounts for about one-fifth of the world’s population, but consumes nearly half of the world’s antibiotics.”

The Guangdong Center for Disease Prevention notes that a small portion of the antibiotics China used for disease prevention and in feed additives in livestock, poultry, and aquaculture is absorbed or transformed by an organism and excreted as metabolites. Nearly 85 percent is excreted as prototype drugs that directly enter the surface water and groundwater environments.

According to Wan Hua, “The antibiotic residue in drinking water can lower the immunity of the human body and make it resistant to drugs, causing most medications to lose their effectiveness.” He further said, “The long-term use of fertilizer or water containing antibiotics used for vegetables, rice, and other agricultural products, as well as antibiotics for livestock and aquatic products, can cause allergic reactions after consumption. Some drugs can also cause chronic poisoning, and even have carcinogenic and physical deforming effects, interfering with the physiological functions of the human body.”

The World Health Organization (WHO) estimates that by 2050, drug-resistant diseases will kill 10 million people each year, which will cause catastrophic economic losses comparable to the global financial crisis of 2008 to 2009.