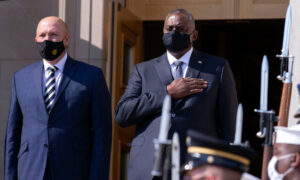 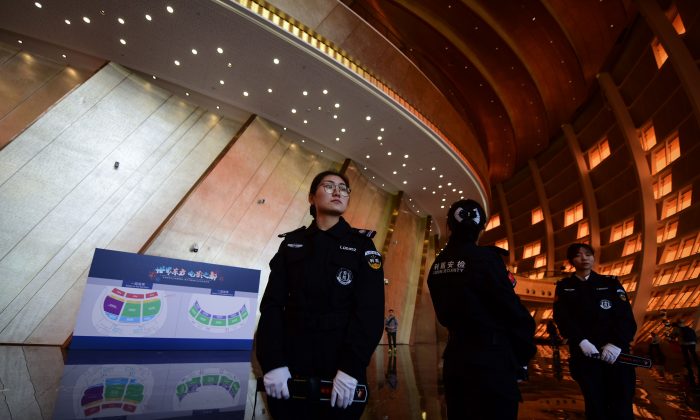 Security guards stand at the entrance of the Wanda Qingdao Movie Metropolis before its opening ceremony in Qingdao, China's Shandong province on April 28, 2018. (WANG ZHAO/AFP/Getty Images)
US News

For years, the Chinese Communist Party (CCP) has been using a variety of methods to infiltrate the Hollywood film industry. In the remarks U.S. vice president Mike Pence delivered on Oct. 4, he gave two examples about Hollywood films having been revised in order to pass the CCP’s censorship so that they could enter the huge Chinese market.

Pence explained how the CCP tries to penetrate the United States in all aspects. “Beijing is employing a whole-of-government approach, using political, economic, and military tools, as well as propaganda, to advance its influence and benefit its interests in the United States,” he said in the speech, delivered at the Hudson Institute in Washington, D.C.

In culture, Pence said, “Beijing routinely demands that Hollywood portray China in a strictly positive light, and it punishes studios and producers that don’t. Beijing’s censors are quick to edit or outlaw movies that criticize China, even in minor ways.”

He took two films as examples, saying, “‘World War Z’ had to cut the script’s mention of a virus originating in China. ‘Red Dawn’ was digitally edited to make the villains North Korean, not Chinese.”

World War Z is a 2013 American apocalyptic action horror film based on the 2006 novel of the same name by Max Brooks. It describes an outbreak of the zombie virus that is going to destroy the world. While the survivors are facing life and death, former United Nations investigator Gerry Lane (starred by Brad Pitt) leaves his wife Karin and two daughters behind and travels the world to find a way to stop the zombie pandemic.

Production of the film was fraught with trouble from the beginning. Sina Entertainment reported on April 2, 2013 that because Brad Pitt had played the role of a character who befriended the Dalai Lama in the 1997 film “Seven Years in Tibet,” he had been on the CCP’s long-term blacklist.

World War Z’s producer Paramount Pictures Corporation was particularly careful to cut down a plot point involving China as the zombie virus’ place of origin. To work around this scene, the producer spent nearly seven weeks reshooting and editing the film, far exceeding the originally planned $125 million budget and becoming the most expensive movie in Hollywood that year. In the Chinese version of the film, the zombie pandemic was renamed the “Moscow flu.”

Red Dawn is a 2012 American war film, a remake of the 1984 film of the same name that dealt with a fictional Soviet invasion of the United States. The new film initially cast China as the invader, but met with heavy protests from the CCP.

The New York Times’ Manohla Dargis said in her article “He’s Lost the Game. Can He Beat the Koreans?–‘Red Dawn’ Remake Trades Soviets for North Koreans” in November 2012 that to pass the CCP’s censors and enter the Chinese market, the producers of Red Dawn quickly edited the film and turned the invaders into North Koreans using digital technology.

“After Chinese complaints, the occupier was changed to North Korea, which makes marginally more sense because China has, of course, already taken over, one sneaker at a time,” Dargis wrote in his review. She panned the film, saying it had “bargain-bin special effects, bad acting and politics” and that “thinking adults will find a North Korean invasion the stuff of wing-nut fantasies.”

Hollywood films began to enjoy great popularity in China starting in the 1990s. All domestically produced films at the time were political propaganda and had poor sales.

Starting in 1994, the CCP began to allow 10 foreign films to enter China every year, and Hollywood movies became extremely popular. The 1998 version of “Titanic” maintained a 360 million box office record for several years. Due to the efforts of the Hollywood film lobby, starting in 2012, the number of foreign films allowed to be shown in China is 34.

However, these films must be subject to strict censorship. Hollywood filmmakers often have to change the script or insert episodes that might be inconsistent to the logic of the original plot.

“No Hollywood producer that wants to take advantage of the Chinese market would at this point include a film that includes anything about Taiwan, about Tibet, about Tiananmen,” Aynne Kokas, author “Hollywood in China” and a professor at the University of Virginia, told Business Insider in October 2016.

Hollywood filmmakers have gone to great lengths to revise their films substantially, removing politically sensitive factors, inserting scenes that cast China in a positive light, or simply changing them into “Chinese special editions.”

By law, films classified as “foreign” can only earn 25 percent of the box office profits in the Chinese market. But if Hollywood filmmakers and Chinese producers co-produce, the Hollywood filmmakers are allowed 43 percent of the profit. This has led to the rapid growth of co-productions between Hollywood and Chinese producers, resulting in films that are tailored to the requirements of CCP censorship from the bottom up.

In 2012, the CCP stipulated that in Hollywood co-productions, the Chinese side should invest at least one third of the capital, Chinese actors must star in leading roles, the film should feature scenes in China, and the like.

In October 2016, China’s Jiemian.com made a list of 18 Hollywood films that deliberately catered to the CCP’s censorship in order to enter the Chinese market. Below are a few examples of how the movies were changed.

The comic book that formed the basis for “Doctor Strange” (2016) originally featured a Tibetan man as the Ancient One, mentor to the titular character. To appease the Chinese censors, the film producers changed him into a Celtic woman.

The Mandarin, a supervillain described as being born in China in the comic book “Iron Man,” was changed to be an actor hired by the real villain in the 2013 movie of the same name. The film is also filled with implanted Chinese advertisements, including a brand of milk alleged to be contaminated with mercury.

The original “Karate Kid” film is a story of an American child being bullied by a Chinese bully. The 2010 Chinese version deleted the scenes about the villain’s kung fu master.

In the 2007 film “Pirates of the Caribbean 3,” all scenes showing Cantonese actor Chow Yun-fat were deleted to meet the Party’s requirement of not depicting Chinese as pirates.

A scene showing drying racks for laundry in Shanghai was deleted from “Mission: Impossible – Fallout,” (2006) for the apparent reason that it seemed to make China appear backward.

In “Captain America: Civil War,” released in 2016, the Avengers are shown using Chinese-built Vivo phones, despite the fact that U.S. secret agents would never use such unreliable equipment.

“X-Men: Days of Future Past” (2014) featured a half-hour scene in Hong Kong, and Chinese actress Fan Bingbing stars in the film.

A scene in the future Paris depicted in “Looper” (2012) was replaced with Shanghai and Chinese actors were added in order to make the film qualify as a Chinese co-production.

The screenwriter of Doctor Strange, C. Robert Cargill, said in an interview on the pop culture show “Double Toasted” that “The Ancient One was a racist stereotype who comes from a region of the world that is in a very weird political place. He originates from Tibet, so if you acknowledge that Tibet is a place and that he’s Tibetan, you risk alienating one billion people.”

He added that the Chinese censorship authorities would say, “We’re not going to show your movie because you decided to get political.”

The BBC Chinese quoted people in China on January 24, 2013 that The CCP’s deletion of film lines and plots in their censorship system indicates the fragility of the Chinese communist regime, as it touches on issues about which Beijing is paranoid. Fearing certain content will resonate with the Chinese people and cause social unrest, the censors delete anything that is, or could be politically sensitive.

The CCP is not satisfied with just censorship. In 2012, the Party issued a document to encourage Chinese companies to acquire overseas companies. So companies in the Hollywood film industry and the U.S. cultural industry were hugely acquired by Chinese capital. In the past few years, the most famous Chinese investment in Hollywood is Dalian Wanda (Wanda) which is affiliated with the Chinese regime.

Shanghai-based Qdaily reported in October 2017, “Everyone believes that Wanda can collect enough money to buy all of Hollywood.”

In 2016, AMC helped a China-U.S. co-production, “The Great Wall,” to screen in North America. Most of the money used to produce this over $100 million film was spent on purchasing mainstream distribution channels in the United States. However, many North American audiences panned the film.

Voice of America quoted Aynne Kokas, author of “Hollywood Made in China,” on March 1, 2017, as saying that the CCP was promoting its image through investing in Hollywood co-productions and achieved its purpose of publicity.

Wanda has deep pockets and strong financial support. According to incomplete statistics, Wanda had borrowed at least $10 billion from 2012 to 2016, mostly from Chinese banks.

In 2016, the China global direct foreign investment reached a peak of $196.2 billion.

Congress is also concerned about Wanda’s acquisition. New York Times reported in October 2016 that the congressman, John Culberson (R-Tex), chairman of a subcommittee overseeing the Justice Department in the House Appropriations Committee, sent a letter to the department, asking them to review Wanda’s activity.

“These acquisitions, as well as many more cofinancing arrangements, allow Chinese state-controlled companies a significant degree of control over the financing and content of American media that raises serious concerns about how this may be used for propaganda purposes,” Culberson wrote on Oct. 6.

″[China uses film] to try and promote so-called soft power all over the world, telling China’s story,” Stanley Rosen, a professor of political science at the University of Southern California specializing in Chinese politics and society, says in an interview with The WorldPost in September 2017.

Aynne Kokas wrote in February 2017: “‘Made in China’ will be a marketing strategy rather than a way to cut costs. If the market continues to grow, rather than simply being made in China, new productions will increasingly be made for China.”

“Yet greater focus on the Chinese market also may privilege content that is more likely to be accepted by Chinese regulators. As a result, Hollywood’s accommodation of the Chinese market could substantially shift the type of media produced—not only for China, but also for other global markets” Kokas wrote.

The CCP is not the first communist regime to understand the importance of film. Over half a century ago, Soviet dictator Joseph Stalin said, “If I could control Hollywood, I would control the world.”