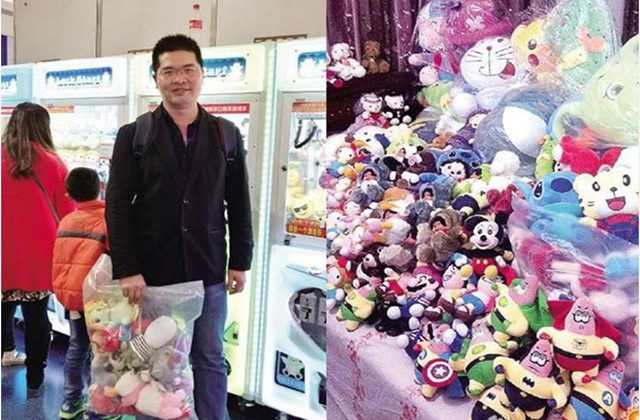 Chen Zhitong of southeast China has made a name for himself among arcade owners by winning 3,000 dolls and toys from claw machine games in the last six months.

The Xiamen resident picked up his hobby last July when strolling through the city’s Jianghu shopping mall.

“The first time I played was last year in July, it was really random, I saw the machine in the entrance of a supermarket,” he said in a comment translated by the Shanghaiist. “I didn’t think much of it, it was just a way to kill time.”

Playing the claw games in his spare time after work, he soon mastered the ins and outs of each machine, and learned to gauge the individual characteristics of any given claw. As expected, some are rigged to fail.

“The extent of the claw’s shakiness can tell you if the grip is really bad, so of course you can’t get dolls with it,” Chen said.

It took about a month for Chen and other enthusiasts to realize that he had a talent. Once, he cleared out an entire machine in one sitting.

“I’m not actually interested in the dolls themselves, it’s the process of getting them,” Chen said. “It’s pretty exciting.”

Shop owners at the mall also took notice and reportedly asked Chen to quit playing their machines and carrying off their dolls. “Of course I won’t stop, I’ve already lost count,” is his answer.

To keep his earnings from cluttering his house, Chen keeps his victory spoils in a dedicated room and has since limited his playing.

“I give myself a limit,” he said. “I figure that the cost of one doll is around ten yuan to make, so I don’t go over five yuan when playing, if I can’t get it I don’t get it.”