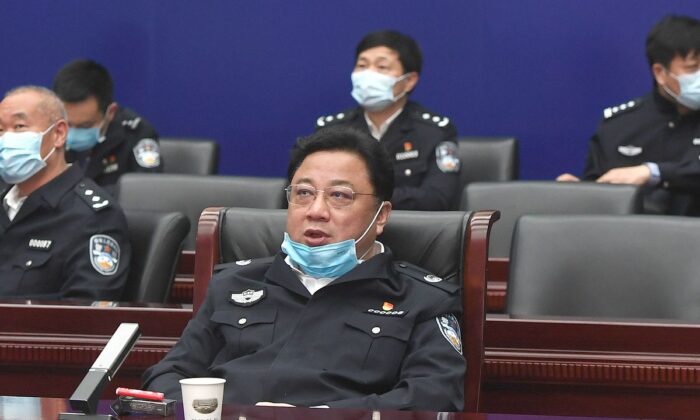 Sun Lijun, then a vice minister of public security, attends a meeting in Wuhan, Hubei Province, on April 7, 2020. (Chinatopix via AP)
Chinese Regime

Sun Lijun, former vice minister of Public Security of the Chinese communist regime, went on trial in Changchun, Jilin Province on July 8. It’s one of China’s most high-profile cases in recent years.

Sun, 53, was charged with receiving 646 million yuan (about $96.5 million) in bribe from 2001 to April 2020, when he held leadership positions at the Shanghai Municipal government and the regime’s Ministry of Public Security.
He also faces accusations of stock market manipulation and illegal possession of two firearms. According to the prosecutors, in 2018, Sun instructed others to continuously buy and sell stocks with the advantage of centralized capital, “affecting the stock trading price and trading volume, which is especially serious in nature.”

A verdict on the case will be rendered at a later date.

Sun was removed from his official positions in 2020 and expelled from the Chinese Communist Party (CCP) in 2021. He was investigated and held by the CCP’s Central Commission for Discipline Inspection (CCDI) for months. In a statement CCDI said that he “arbitrarily disagreed with the central government, creating and spreading political rumors, forming gangs and cliques within the Party to build his personal power, and forming a cabal to control key departments.”

Sun was also accused of “secretly collecting and releasing a large number of classified materials” when he led the group managing the COVID-19 pandemic in Wuhan. Sun is believed to have leaked secrets about the source of the pandemic to the United States and Australia.

They are considered close followers of Meng Jianzhu, former secretary of the Central Political and Legal Affairs Commission of the CCP, and a member of former CCP party boss Jiang Zemin’s faction.

The Epoch Times columnist Wang He commented that Xi Jinping is using the trial of Sun Lijun to intimidate his opponents and secure re-election as Party leader at the CCP’s upcoming 20th National Congress.

Leader in the Persecution of Falun Gong

In Sun’s decades long political career, he held key positions in the main command system of the CCP’s persecution of Falun Gong, as director of the “610 office” at the regime’s Ministry of Public Security, and deputy director of the “610 Office” of the CCP’s Central Committee. The “610 Office” is an illegal organization specifically set up by former CCP leader Jiang Zemin to persecute Falun Gong, a spiritual practice based on the principles of truth, compassion, and forbearance.

In addition, Sun was responsible for the “709 case,” China’s mass arrest of civil rights lawyers on July 9, 2015, which resulted in more than 200 lawyers being detained, jailed, harassed, and disbarred. It was a major blow to the grassroots rights-defense movement in China, as the human rights conditions further deteriorated.

Gu Qing’er contributed to the report.