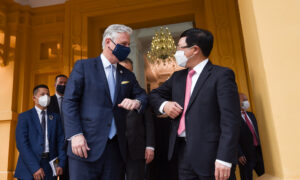 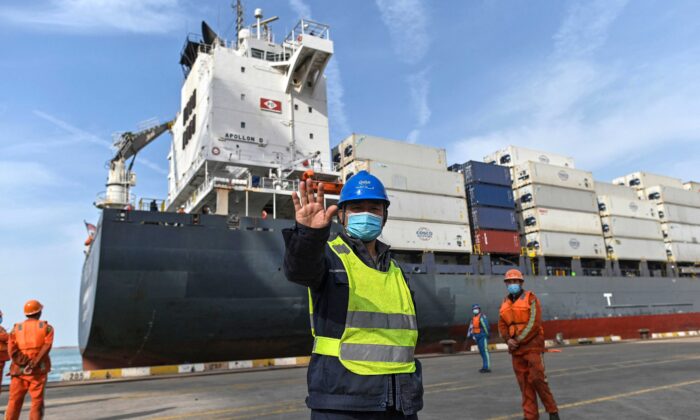 Amid the pandemic, China’s export orders have surged due to strong global demand but rising international shipping costs, insufficient supply, and lack of empty cargo rotation have caused traffic congestion in logistics.

In addition, a backlog of products from foreign trade companies has created a tight capital flow for the processing companies. These problems were exacerbated in August and continued as such in September.

Since April, the Delta variant of the CCP (Chinese Communist Party) virus, commonly known as the novel coronavirus, emerged in many parts of the world with countries in South and Southeast Asia, including India, Vietnam, Malaysia, experiencing severe outbreaks, causing some manufacturing and processing orders to return to China.

According to data released by China’s Ministry of Commerce on Sept. 12, from January to August, China’s exports saw a 23.2 percent increase over the same period last year, the highest level in the same period in 10 years. In the first half of 2021, China’s export growth accounted for 27.9 percent of its GDP growth, also a ten-year high.

At the same time, shipping costs continue to soar. According to the weekly export container shipping index released by Shanghai Shipping Exchange on Sept. 10, China’s containerized freight index rose 1.9 percent from the week before (Sept. 3), reaching 3157.6. When compared to 1913.6 in March, it increased by 65 percent.

Xie Hong, chairman of the Guangdong Association for the Development Promotion of Small and Medium Enterprises, believes that large companies have strong bargaining power and are less impacted by the soaring shipping prices. However, small to medium-size companies operating their brands overseas that need to bear the freight on their own will be relatively affected by the soaring shipping costs.

Since May, due to the CCP virus pandemic, China has partially or entirely closed the Yantian Port in Shenzhen, the Port of Ningbo-Zhoushan, and the Shanghai Port. Although they have returned to normal, port congestion and shipping delays have caused empty containers to be stranded overseas, and container transportation demand exceeds supply.

Among them, Yantian International Container Terminals had 11,000 appointments booked within half an hour of declaration for heavy export containers (that have already been loaded) in late August.

Zhou Kewen, vice chairman of the China Road Transport Association’s Container Transport Branch, said that the Yantian Port is often congested due to the shortage of empty containers and too little recirculation of old containers. The overall supply of containers is in short supply.

In addition to the low supply of containers, the storage space is also limited. According to the August China Shipping Containers Market Analysis released by the Shanghai Shipping Exchange on Sept. 3, the average loading rate of ships at the Shanghai Port is close to 100 percent.

COSCO SHIPPING Holdings, the largest integrated shipping company in China and the second-largest globally, had a net profit of $5.76 billion in the first half of 2021, an increase of 3,162 percent over the same period last year. It announced on Sept. 3 that its subsidiary Orient Overseas would build 10 containerships at a total price of $1.58 billion to meet future market demand and reduce dependence on ship leasing companies.

Poor logistics has caused a backlog of foreign trade products. Gao Feng, a spokesperson of China’s Ministry of Commerce, said at a press conference on Aug. 26 that some Christmas products this year were shipped earlier than previous years, taking into account the risk of shipping detention. At the same time, some orders are backlogged due to booking difficulties or excessive freight charges. The backlog orders stay in domestic warehouses, putting pressure on business operations.

Gao also admitted that many unfavorable factors such as rising raw material prices, increasing global freight rates, and shipping congestions had affected the Chinese foreign trade companies’ Christmas product exports. Many companies have reported that they have “sufficient orders but make no profit.”

The CCP authorities do not have specific figures on the number of foreign trade companies facing tight capital flows, but their recent actions suggest the seriousness of the problem.

On Sept. 9, the People’s Bank of China (China’s central bank) added $46.55 billion of small refinancing loans to eligible local commercial banks at preferential interest rates within the remaining four months of 2021. This action supports the increase of small and micro enterprises and individual industrial and commercial households; the average interest rate of the loan must be around 5.5 percent.