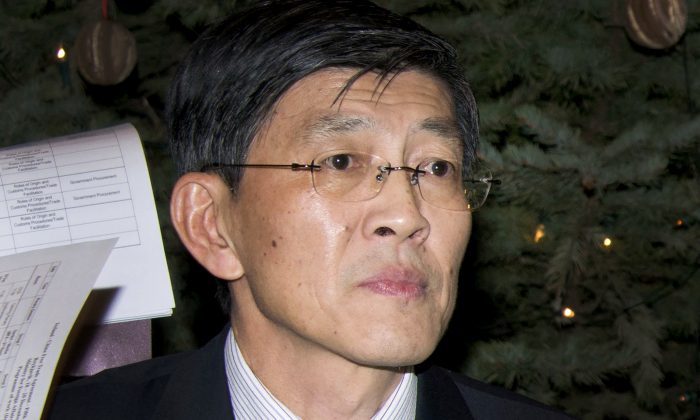 Ma Jisheng, then Chinese ambassador to Iceland, in a meeting at the Iceland's Foreign Ministry, in Reykjavik, on Dec. 18, 2012. Ma was taken away by the Ministry of State Security in early 2014 reported Sina. (Halldor Kolbeins/AFP/Getty Images)
China

Like many parts of the Chinese governing apparatus, China’s foreign ministry has long been under the shadow of former Communist Party leader Jiang Zemin—even during the years of his successor Hu Jintao. A clutch of prominent diplomats all had personal ties to Jiang. But now, all that appears to be changing, with several recent new appointments and quiet resignations of old hands.

The Party’s anti-corruption taskforce made clear that change was in the wind after a Nov. 15 inspection of key Chinese diplomatic outposts in North America, including the Embassy in Washington, D.C., the country’s UN Mission, and the consulate in Toronto. Led by Xie Hangchan, the secretary of the discipline-inspection commission for the Ministry of Foreign Affairs, the team later “offered feedback and demanded changes,” according to a summary on the website of the Central Commission for Discipline Inspection.

Ten days later a new appointment was made: Zhang Qiyu, currently assigned to the PRC’s Mission at the United Nations, will become the consul general in New York after the current consul general, Sun Guoxiang, steps aside in December.

“The inspection by the anti-corruption authorities means that there are going to be changes in the Chinese diplomatic circle,” said Zhou Xiaohui, a political columnist for the Chinese edition of the Epoch Times, who recently wrote about the changes.

“Perhaps a certain current diplomat is going to step down unexpectedly, or a certain retired diplomatic will soon be put under investigation. Almost certainly the influence of Jiang’s group in Chinese diplomatic circles is set to wane.”

China’s Ministry of Foreign Affairs has always been unique organization: immediate relatives—often husbands and wives, fathers and sons or daughters—often all work in the diplomatic sector. This is in part to allow family members to spend time with one another, where they would otherwise be separated due to the long-term overseas and rotational postings in the ministry. Couples often work in a single division or bureau, and learn the same foreign languages, according to Boxun, an overseas Chinese news website.

Perhaps a certain current diplomat is going to step down unexpectedly, or a certain retired diplomatic will soon be put under investigation.
— Zhou Xiaohui, political columnist, Epoch Times

For example, Zhang Qiyue, former spokeswoman for the Ministry of Foreign Affairs, is the wife of Liu Jieyi, China’s Permanent Representative to the United Nations in New York since 2013.

Because Chinese diplomats are often chosen and trained from the International Department of the Central Committee, Jiang Zemin was able to assist the careers of loyalist, and gained a network of supporters inside the Party and in the Foreign Service. This phenomenon didn’t change until Wang Yi became the foreign minister in March 2013.

A number of officials with long-running ties to Jiang include Qian Qichen, Tang Jiaxuan, Li Zhaoxing and Yang Jiechi.

And predictably, many of the officials with ties to Jiang—including Liu Biwei, Peng Keyu and Sun Guoxiang, all formerly consul generals in New York—have used their bully pulpits to make attacks against Falun Gong, a Chinese spiritual practice that became Jiang’s sworn enemy during his years in office. Li Zhaoxing, Yang Jiechi, and Zhou Wenzhong, all former Chinese ambassadors to the United States, also attacked Falun Gong in public during their tenures.

Peng Keyu, consul general of New York, went a step further in May of 2008, orchestrating mobs to surround and berate Falun Gong practitioners in the Chinese enclave of Flushing. Over ten assailants were arrested by the police during that period.

It can sometimes be troublesome for Chinese leaders to have the offsider of a political enemy running foreign policy—such as when, in 2002, Li Zhaoxing, a Jiang Zemin client and former foreign minister under the Hu Jintao administration, barged in on a one-on-one talk between Hu and then U.S. vice president Dick Cheney, because he had been instructed to keep an eye on Hu Jintao. (The anecdote was carried widely by the overseas Chinese press at the time. Li was later fired.

Already there have been some firings and changes of posts—sometimes suddenly. On Sept. 17, the day before Xi’s visit to India, the Chinese ambassador to India was replaced. According to the state-run Xinhua, Xi named Le Yucheng to be the new ambassador, replacing Wei Wei. Mingjing, an overseas Chinese website, said the sudden substitution meant that there was likely more to the story.

On Sept. 17, Sina News reported that the Chinese ambassador to Iceland, Ma Jisheng, and his wife were taken away by the Ministry of State Security in early 2014.

Song Tao, a former deputy foreign minister, was removed from office in January, according to Sohu.

In May 2013, Wang Yi, former director of the Taiwan Affairs Office of the State Council, who hadn’t held a diplomatic post for the last 5 years, was appointed foreign minister, taking over from Yang Jiechi. It’s unusual for someone outside the diplomatic community to be named foreign minister.

Moreover, Wang Yi’s strongest second language is Japanese, not English, unlike the vast majority of China’s diplomats. Insiders say there are two key unspoken rules: fluency in English, and a hardline diplomatic stance.