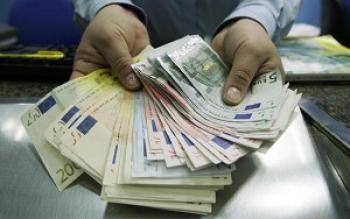 Since October of this year, the Euro to U.S. dollar exchange rate has declined sharply. (AFP/Getty Images)
Business

Cai Qiusheng, an official of the External Debt Division of the Capital Account Management Department under the State Administration of Foreign Exchange (SAFE), said recently that China's foreign exchange reserves have fallen for the first time since December 2003, and have gone below U.S. $1.9 trillion, according to a Beijing News report on December 23.

Stephen Green, an economist from Standard Chartered Bank–the oldest foreign bank in China, believes that the decline in China’s foreign reserves may be due to withdrawals by foreign investors and the devaluation of the Renminbi (Chinese currency).

The accumulation of foreign reserves is comprised of the balance of trade, foreign direct investment (FDI) and non-trade and non-FDI flows.

Signs of foreign exchange reserve funds outflow have begun to show since September. In that month, China’s foreign exchange reserves increased $21.4 billion, $3.6 billion less than the increase for the same month of last year, the trade surplus was $29.3 billion and FDI was $6.6 billion. Zhang Ming, Secretary General of the Research Center for International Finance of the Chinese Academy of Social Sciences believes that short-term international capital is flowing out.

In October and November, China’s trade surplus was at consecutive record highs. HSBC Bank (China) chief economist Qu Hongbin thinks that although China’s export growth rate is on the decline, its import growth rate has also declined, and hence the trade surplus has been growing constantly.

For a long time, the U.S. dollar occupied the largest share of China’s foreign exchange reserves. In the last two to three years, the Chinese regime stressed diversifying its foreign reserve assets to spread risks. Qu pointed out that although the Central Bank has never disclosed the composition of its foreign currency reserve assets, the market generally operates on the basis that it has a relatively large portion of Euro assets. Qu believes that a major cause for the decline in the reserves is the sharp drop in the Euro to U.S. dollar exchange rate since October.