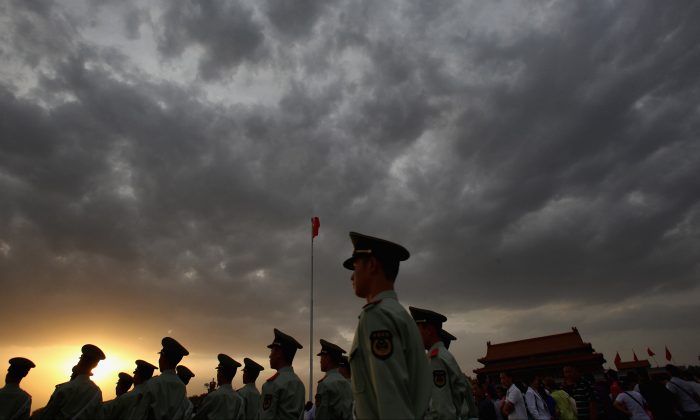 An article has recently made the rounds on the Chinese internet, whereby it estimates that there are 48.9 million Chinese Communist Party secretaries—a position equivalent to a Party boss—in the entire country.

According to a June 2018 article by state-run media Xinhua, there are a total of 89.56 Party members in total. That means over half of the cadres are Party bosses.

By a conservative average of an annual salary of 50,000 yuan (about $7400)—a typical sum for a Chinese citizen with a comfortable standard of living—that means the total salary payments to Party secretaries alone would equal 2.4 trillion yuan (roughly $353 billion).

The article’s data comes from research by Jiao Guobiao, a former associate professor of journalism at Peking University.

This number, 48.9 million, which counts party secretaries and deputy secretaries at all levels of administration, is equivalent to the population of some major European countries.

Jiao arrived at the number based on the following analysis: from the Party’s Central Committee—a high-level body comprising the Party’s 205 most elite members—to the village-level party branches, there are a total of 16.3 million incumbent Party secretaries, accounting for 1.25 percent of China’s population.

The Party permeates all levels of society. Within all levels of government, there are a total of more than 1.07 million secretaries.

Thus, according to the standard party structure—whereby one secretary has two deputy secretaries working under him—there are a total of 48.9 million party secretaries in the country.

But in his analysis, Jiao had written that there are likely even more Party secretary positions within public institutions.

He noted that a universities often have dozens, sometimes hundreds, of Party secretaries. At the elite Tsinghua University, there are more than 100 research institutions and schools, such as its medical school and law school—all of which have Party organizations.

At Henan University, there are 62 such institutions.

This vast number of Party cadres creates a major problem for China’s fiscal policy, as most of the government officials’ and civil servants’ salaries are paid for by tax revenues. Chinese netizens frequently use the term “mouth-feeding finances” in reference to how taxes are used to feed the mouths of Party officials and their families.

China’s government system consists of both the Party and the state. Thus, there is often a Party position equivalent to the administrative official position—creating redundancy.

The previous calculation of 2.4 trillion yuan also does not take into account paying the salaries of the staff who work under these secretaries, office space, car rides, and office supplies.

Qiao Xinsheng, a professor at the Zhongnan University of Economics and Law in Wuhan City, has written extensively on this subject.

In a Jan. 2018 article published on the website of the state-run Securities Times, Qiao wrote that local governments, crushed by the costs of paying salaries to Party and government officials, focus on building infrastructure projects in an effort to increase fiscal revenue. To finance these construction projects, local governments set up companies to obtain financing from state-owned commercial banks. However, these projects do not increase the actual income of residents; to the contrary, the cost of living goes up as a result.

Qiao said that it is necessary to turn the fiscal system from the current “mouth-feeding” mode to actually improving people’s livelihood. He suggested that the government cut down its state institutions to reduce government spending, and at the same time, use public finances to help citizens resolve social problems.