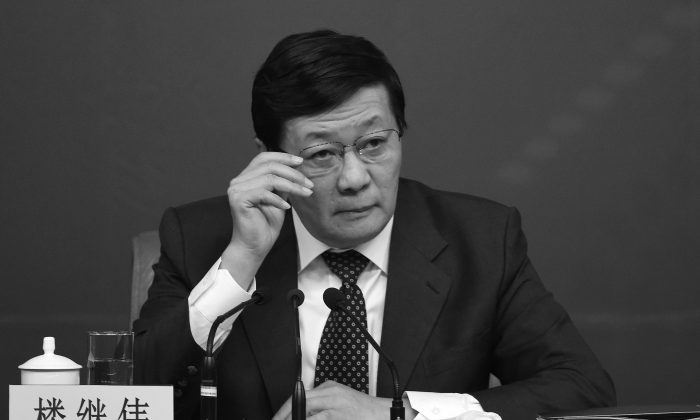 The “middle-income trap” is when a developing country starts to take off, but never really does—and it’s the last thing that a Chinese regime concerned with social stability wants. Yet China’s finance minister, Lou Jiwei, intimated that China may be heading for just that fate, saying that the chance the country falls into the middle-income trap in the next 5 to 10 years is more than 50 percent.

In part it’s due to the rapidly aging Chinese population, he said, but also hinges closely on whether some key reforms have be implemented.

Lou made the remarks at the “Top-Level Economic Forum” in the prestigious Tsinghua University on April 24. He said that it was crucial for China to sidestep the trap by maintaining a 6.5 to 7 percent economic growth rate. Achieving this in the next 5 to 7 years means putting into place the “all-around reforms” that are part of the program of the current leadership, and ironing out many of the distortions in the market.

He listed the five types of reforms that would need to be enacted, including: The removal of food subsidies, the weakening of unions for increased labor market flexibility, more relaxed zoning restrictions of rural land, and an end to expropriations from farmers, and a social security system based on contributions throughout working years.

Lou says that if the targets set for the year 2020 in the Third and Fourth Plenary Sessions of Party’s Central Committee are fulfilled, then China will be able to escape the middle-class trap. But he said the greatest challenge is deleveraging—i.e., ending the reliance on debt to fuel economic growth. The economy will get out of hand if there’s an explosion of leverage, Lou said. Looking at China’s stock market, and the rapid growth of margin accounts that have fuelled an enormous rally, indicates that doing so could be much harder than it sounds.