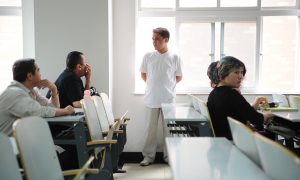 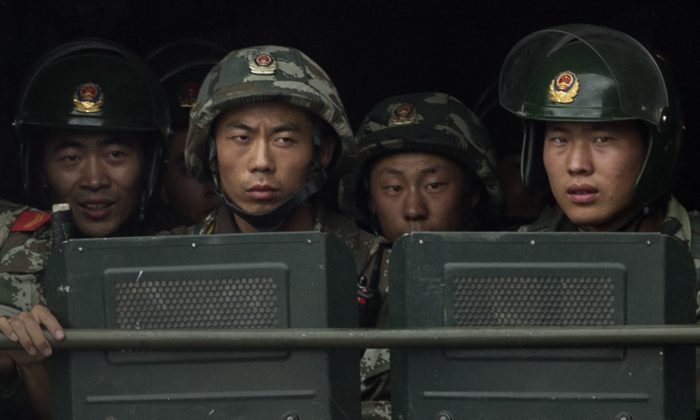 Chinese soldiers ride on the back of a truck as they patrol outside the Id Kah Mosque in Kashgar, China's Xinjiang region, on July 31, 2014. (Getty Images)
China

China’s Fight Against Terrorism in Xinjiang Could Stir Social Unrest

In creating new laws to combat religious extremism, the Chinese Communist Party could be creating a self-fulfilling prophecy.

Spokespeople for the rights of Uyghurs, a Turkic-speaking, Muslim people, believe that the new policies are aimed squarely at them.

“Uyghur religious beliefs are being highly politicized by China,” wrote Dilxat Raxit, a spokesman with the World Uyghur Congress based in Germany, in an email. “Orthodox beliefs are now considered religious extremism.”

Since the al-Qaeda attack on New York’s Twin Towers in 2001, the Chinese communist regime has been claiming that China, like the West, is a victim of extremist jihadi groups.

The regime reminded the world again of what it says are its own struggles with terrorism after the deadly Paris bombings by ISIS last year, blaming spates of violent knife attacks in the country on a supposedly internationally connected terrorist group run by Muslim Uyghurs.

China uses a very broad brush to describe all sorts of political opponents as terrorists even if they don’t meet the standard measure.
— Max Abrahms, professor, Northeastern University

But the eventual enactment of anti-terror laws in Xinjing could end up inspiring actual hostilities from the mostly peaceful Uyghurs, experts say.

World Uyghur Congress spokesman Dilxat fears that the proposed anti-terror and religious extremism legislation would be used to “suppress and strike” Uyghurs “seeking to preserve their religious freedom,” resulting in “more conflicts” between the Uyghurs and the Han Chinese authorities.

The Chinese regime has attributed sporadic cases of violent knife attacks in train stations to Uyghur terrorists. But experts say that these unsophisticated attacks look more like incensed and desperate individuals lashing out in reaction to state repression—as opposed to sophisticated, ideologically motivated terrorism.

At least one scholar of international affairs, associate professor Sean Roberts at George Washington University, doubts the official story about the so-called East Turkestan Islamic Movement (ETIM), a Uyghur separatist group that the Chinese regime claims is responsible for many attacks, in a journal article.

Max Abrahms, a terrorism expert and professor at Northeastern University, feels that China is “not being unreasonable in preaching that terrorism could visit its country.” But in the case of Xinjiang, the Chinese authorities would “more likely overreact than underreact” when it passes its anti-terrorism regulations.

Most governments, Abrahms explained in a telephone interview, prefer a broader definition of terrorism to serve their own political interests. And the Chinese regime “uses a very broad brush to describe all sorts of political opponents as terrorists even if they don’t meet the standard measure.” This approach, however, is “actually a politically risky strategy and generally counterproductive.”

Uyghurs already have many reasons to be upset with the regime. Some cities in Xinjiang forbid Uyghur men from growing beards and women from wearing headscarves, important Islamic customs. Uyghur children barely know their mother tongue because only Mandarin Chinese is taught in schools. And Han Chinese are continually migrating to Xinjiang, taking up cushy government jobs and changing the makeup of Uyghur society.

Dilxat Raxit feels that any upcoming conflicts that might stem from the proposed anti-terrorism law can be prevented if the regime “reflects on its own policies, and respects Uyghur culture, beliefs, and traditional way of life.”