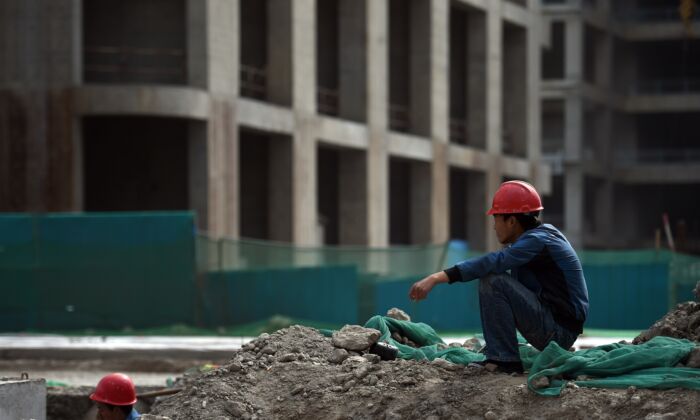 A construction worker rests near a building in the new Yujiapu financial district in Tianjin, northern China on May 14, 2015. (Greg Baker/AFP/Getty Images)
China Business & Economy

Regulators found China’s fast-cooling property sector is in a dilemma and looking for a way out, said China observers, as cash-strapped builders default on their debt and sales plunge.

As the peak season for home sales faded, sales fell in both new and resale homes overturning everything that Chinese people know as “Golden September and Silver October”—the two months that traditionally have upbeat property sales.

By the end of October, the volume of second-hand housing transactions (36,000 units) in 13 principal cities in China had fallen back to where it was seven years ago, down over 40 percent from last year, Shanghai E-House Real Estate Research Institute found.

Beijing saw its monthly turnover of second-hand properties slump for the seventh consecutive month to 9,340 units in October—the first time in the year that it fell below 10,000 units—flagging a 53.4 percent fall on a year-on-year basis.

Prices of new homes also dropped for the first time since March 2015, according to data released by the National Bureau of Statistics on Nov. 15. In the resale home market, prices in 64 of 70 major cities declined, with prices in two unchanged and higher in four.

Frank Tian Xie, a professor of business at the University of South Carolina Aiken, said that it is because of overcapacity and evaporating market confidence of homebuyers.

Major property developers grappling with a liquidity crisis are holding back sentiment in China’s property market, which accounts for a quarter of gross domestic product by some metrics.

“From an initial frenzy, home buyers changed to a disillusioned, if not pessimistic, outlook on China’s real estate market, believing that property prices would fall,” Xie told The Epoch Times.

Despite the downturn in demands, China is expected to stand firm on policies to curb a fall in home prices.

“There is a surplus of housing, and a large number of real estate companies facing a financial crisis are eager to sell off their stagnant properties in order to repay the bank loans, which will inevitably lead to a significant price fall. It is likely to lead to the bursting of the real estate bubble and a market collapse. This is not what the Chinese Communist Party wants to see,” he said.

But Xie said that price controls would see developers’ missing more repayment deadlines, which would lead to greater uncertainty in the banking system with a huge pile of bad loans.

The property market has been “plunged into misery,” he said.

On the supply side, new construction starts plunged 33.14 percent on year in October, extending the 13.54 percent fall in September, while overall investment by developers in projects dropped 5.4 percent, deepening from the 3.5 percent decline a month earlier, Reuters calculations of the NBS data showed.

Tougher regulations on new borrowing since the summer of last year have squeezed developers financially and cast a shadow on new projects.

Wang He, an overseas commentator on current affairs, told The Epoch Times that financial institutions would remain cautious in financing real estate enterprises.

Whether the high-pressure policy will be eased depends on the authorities’ judgment of China’s economic trend, said Wang.

According to incomplete statistics by Chinese media, a total of 274 real estate companies have gone bankrupt year to date until September this year—about one company per day.

“[The regime] should liberalize the market and let the market’s regulatory mechanism determine the housing price, instead of continuing to manipulate the price,” said Xie.