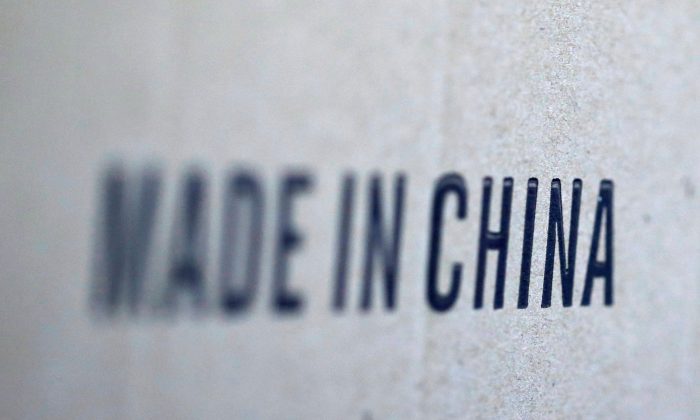 The words 'Made in China' are pictured on a box of products imported from China. (Regis Duvignau/Reuters)
China Business & Economy

Shein, China’s ultra-fast fashion online store and the most downloaded shopping app in the United States, is hit with a new lawsuit as it faces criticism for the alleged poor treatment of its workers.

On June 15, Magdalena Mollmann, a Florida-based artist professionally known as Maggie Stephenson, filed a lawsuit of more than $100 million in damages for copyright infringement against Shein’s parent company, the Hong Kong-based Zoetop Business, and the Los Angeles-based Shein Distribution Corporation.

The fast-growing e-commerce platform’s success is due to its speedy production, but its labor practices have recently received attention. Shein faces criticism for alleged poor work conditions in its workshops in China.

The Path to Ultra-Fast Fashion

Shein saw astronomical growth since 2015, gaining about 177.5 million app downloads across the world in 2021, according to Statista’s report. Shein’s main customer bases are in America, Australia, Europe, and the Middle East. The company does not have any domestic customers in China.

The company earned the nickname “Instant Fashion” for its speedy production. It contracts with small and medium manufacturers and shops in China, and primarily caters to young women under the age of 25 worldwide.

According to the company’s 2021 report, Shein works with 6,000 on-demand suppliers.

According to Chinese sources, Shein reportedly shortened a three-week production process to three days—from the initial proofing and design to the procurement, production, and the final market of new products, allowing their consumers to receive orders in one week.

There’s little public information about the company and its founder, even in the Chinese media.

The founder, Chris Xu, started as a wedding dress e-tailer with a platform, SheInside.com, in 2008. In 2012, the company changed its name to Shein. Xu and his associates have kept a low profile.

However, the company’s success has been under scrutiny.

In the past three years, Shein or Zoetop have been involved in at least 50 federal lawsuits in the United States alleging trademark or copyright infringement, according to a report by The Wall Street Journal.

While its success is the result of the Chinese logistics market, warehouse automation, online influencers, and super low prices, the negative side of the operation received minimal attention from mainstream media.

The company’s speedy production came under scrutiny when a TikTok user uploaded a video in May, revealing unethical labor practices.

The video shows various Shein products shipped to consumers that contained notes from workers, asking for help and raising public awareness about their plight.

One note (initially written in Chinese and translated to English) reads: “SOS! SOS! SOS! We are prisoners in Xiangnan Prison, Hubei Province, China. We have long been producing clothing for export. We work 15 hours a day and eat food that is inferior to what pigs and dogs would eat. We call on the international community to condemn the Chinese government for its violation of human rights.”

Shein denied the allegations and posted a statement on TikTok: “We want to make it very clear that we take supply chain matters seriously. Our strict Code of Conduct prohibits suppliers from using child or forced labor and we do not tolerate non-compliance.”

Furthermore, in the so-called “Shein Village” near Shein’s headquarters in Panyu, a district in Guangzhou, employees typically worked overtime—in some cases, “over 75 working hours per week,” the report said.

According to Article 36 of China’s labor law, a work week cannot exceed 44 hours.

Shein denied Public Eye’s allegations with the following statement: “Our customers are responsible for the operations of their business within their leased premises on our property. With respect to the concern you raised, we have no knowledge of non-compliance.”

The Epoch Times contacted Shein for comment regarding its labor practices. The company has not responded as of press time.