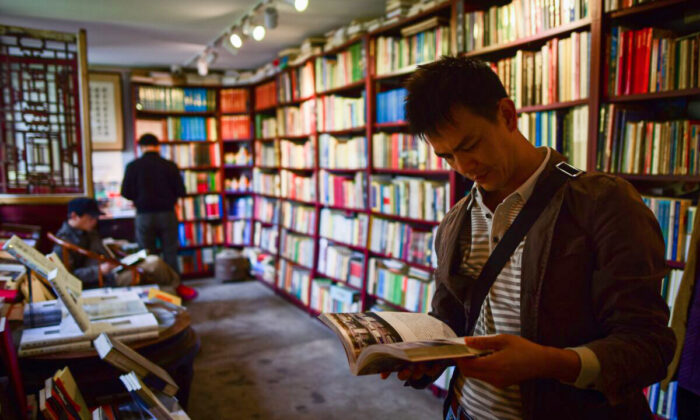 A man reads a book at a book store on World Book Day and Copyright Day in Beijing on April 23, 2018. (Wang Zhao/AFP via Getty Images)
Social Issues

China’s ‘Fairy Tale King’ Forced to Shelve His Pen, Battling for His Copyrights

Zheng Yuanjie, a household Chinese writer known as the “fairy tale king,” announced the cessation of his 36-year-serialized exclusive magazine from Jan. 1 in order to take time out to deal with copyright lawsuits against the misappropriation and infringement of his fairy tale character images.

On Dec. 15, 2021, Zheng announced on Weibo, China’s Twitter, a halt to his journal “Fairy Tale King,” which was founded in 1985, with an attached letter saying he would have to suspend his creative work to direct all his efforts on defending his copyrights despite 32 years of unsuccessful lawsuits against three trademarks that he claims have plagiarized his creative images—Pipilu, a bad study but brave and honest boy, was registered as a trademark for selling pork skin meat, while Fairy Tale King as well as Shuke, a mouse capable of piloting a helicopter, were used for selling children’s clothes and underwear respectively.

Zheng in the letter mentioned his tough road—672 pending trademark disputes—expressing an apology to millions of his readers and calling for their support in his fight to protect his intellectual property rights.

“There is still room for improvement in the field of trademark protection in China,” He said.

According to Economic Daily, a state-run media, trademarks are divided into 45 categories in China, and each is independent and unrelated. For example, when a trademark is registered in the periodical category, others can still register the same name in the apparel category. Therefore, many defenders find it difficult to protect their trademarks given the high fee payments to cover all areas. And even if registered, the trademarks are revoked in the case that they are not used for three years.

Zhang, through his past experience, has seen the complicated and lengthy process of trademark lawsuits in China. According to Yicai, a Chinese financial media, China’s Trademark Review and Adjudication Board in March 2020 ruled that the trademark of Pipilu could continue to be used by the pork skin meat merchant. Zheng then sued the board in the Beijing Intellectual Property Court. Over one and half years later, the Beijing Intellectual Property Court ruled in favor of Zheng. However, Zheng said that the opposite side is now appealing again, and it is expected to take about three more years to end the dispute.

“If I were to go through the current law process for defending all my trademarks, it would take 335 years,” Zheng said. On average, each defense takes six years and costs about 90,000 Yuan ($14,000), based on his past 20 years of experience fighting against pirated books and other copyright litigation.

China’s Trademark Law defines the legal period for filing a declaration of invalidity against a trademark as five years. Zheng says this is not enough time, and he has had to invoke other terms to push many of his defenses forward to police the numerous instances that he found his intellectual property had been encroached upon more than five years after the trademark was registered.

Zheng, 66, founded the children’s magazine “Fairy Tale King” in 1985, with himself as sole author. It is a favorite publication for many generations of Chinese teenagers.