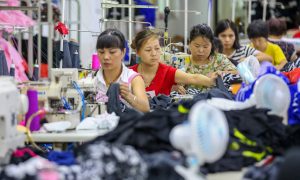 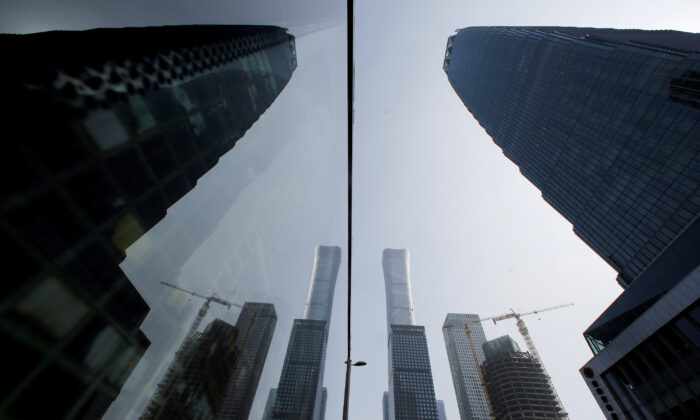 Skyscrapers in the Central Business District (CBD) are reflected in a window in Beijing, China on March 4, 2019. (Thomas Peter/Reuters)
China Business & Economy

BEIJING—China’s factory activity is expected to have contracted for the seventh straight month in November amid sluggish domestic demand, a Reuters poll showed, despite some optimism over chances for an interim deal to de-escalate a trade war with the United States.

The official Purchasing Managers’ Index (PMI) for November is expected to come in at 49.5, below the 50-point mark that separates expansion from contraction on a monthly basis, according to the median forecasts of 28 economists.

The reading would be higher than October’s 49.3.

The continued downturn in manufacturing activity points to further weakness in the world’s second-biggest economy, fueling expectations the authorities will have to roll out more stimulus measures to avert a sharper slowdown and job losses.

China’s full-year economic growth is expected to slow to 6.2 percent in 2019 and cool further to 5.9 percent in 2020, according to a Reuters poll, underlining growing challenges faced by Beijing even as it steps up stimulus amid the bruising trade war.

China’s exports and imports contracted less than expected in October.

But even if a U.S.-China trade deal is signed soon, economists say it is unlikely to help boost exports and manufacturing for some time yet and could still mean more stimulus is needed from Beijing.

The United States and China are close to agreement on the first phase of a trade deal after top negotiators from the two countries spoke by phone and agreed to keep working on remaining issues.

China lowered its lending benchmark rate in November, as widely expected, to reduce company funding costs and shore up an economy hurt by slowing demand and U.S. trade tariffs.

But it is still forecast to show more subdued growth in the sector as the reading is seen to edge lower to 51.4 from 51.7 in October.

The official PMI and its sister survey on the services sector will be released on Nov. 30.

The Caixin manufacturing PMI will be published on Dec. 2 and the Caixin services PMI survey will be out on Dec. 4.