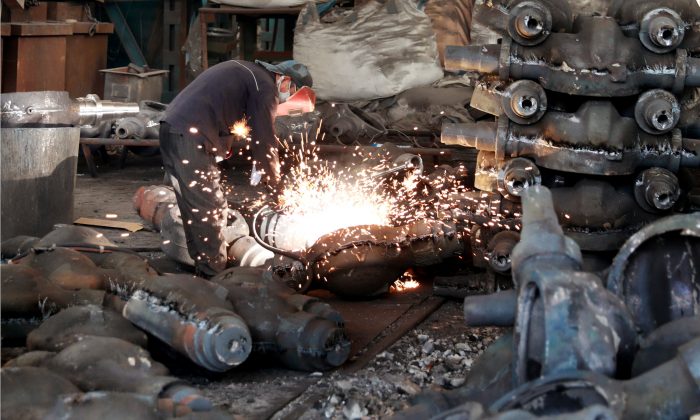 BEIJING—Factory activity in China is expected to have contracted for the third month in a row in July, a Reuters poll showed, underlining the intensifying strains on the world’s second-biggest economy from a protracted trade war with the United States.

The official Purchasing Managers’ Index (PMI) for July is set to have edged up to 49.6 from June’s reading of 49.4, according to the median forecasts of 34 economists. That still left it below the 50-point mark that separates expansion from contraction on a monthly basis.

Another month of weak manufacturing activity is likely to fuel expectations for Beijing to add to a flurry of support measures put in place over the past year, especially as the Sino-U.S. trade war drags on and becomes costlier.

China observers have said that Beijing’s recent growth-boosting measures will take time to filter through to the broader economy, and many analysts are of the view that further stimulus is needed to prevent a deeper downturn and to help stabilize growth.

Growth in Asia’s powerhouse economy slowed to a 27-year low in the second quarter, showing just why policymakers from India to Australia to Europe and the United States are worrying about the China-effect on global output.

Sluggish demand at home and abroad has led to a months-long spell of depressed activity for China’s manufacturers, and a sharp U.S. tariff hike announced in May threatens to crush already-thin profit margins.

Some manufactures have cut this year’s sales target as clients delay purchase orders in a wait-and-see approach, while others have already relocated their production capacity to neighboring countries to avoid the tariff hit.

Profits earned by China’s industrial firms contracted in June after briefly gaining the previous month. Earnings at these big firms have been softening since the second half of 2018 due to the broadening economic pressures, with many putting off business decisions and scaling back manufacturing investment.

The official PMI and its sister survey on the services sector will be released on July 31, the second day of U.S. and Chinese trade negotiators’ meeting in Shanghai for their first in-person talks since a G20 truce last month.

Expectations for progress during the two-day Shanghai meeting are low, so officials and businesses are hoping Washington and Beijing can at least detail commitments for “goodwill” gestures and clear the path for future negotiations.

In a row that has dragged on for more than a year, the world’s two largest economies have slapped billions of dollars of tariffs on each other’s imports.

“We think the current U.S.-China trade truce will prove fleeting, with Trump likely to expand tariffs to nearly all imports from China by early next year,” Capital Economics wrote in a note.

So far, Beijing has relied on a combination of fiscal stimulus and monetary easing to weather the economic slowdown, including hundreds of billions of dollars in infrastructure spending and tax cuts for companies.

But the economy has been slow to respond, and business confidence remains shaky, weighing on investment.

Market watchers believe the People’s Bank of China (PBOC) is more likely to follow any U.S. Federal Reserve rate cut that is widely expected this week by trimming its key short-term money market rates, instead of cutting its benchmark policy rate for the first time in four years.

China’s central bank governor Yi Gang said the country’s current interest rate level is appropriate, adding that whether the PBOC follows the Fed in cutting interest rates will depend on China’s own economic conditions.

The Politburo, a top decision-making body of the ruling Communist Party, is expected to meet later this month to discuss economic and policy issues for the rest of 2019.

“We expect more policy support to be deployed in the second half of the year, but the strength won’t be bigger than last year as the government wants to have room to maneuver for any future shocks,” said Nie. He expects authorities will announce more measures in the Politburo meeting to boost consumption and development of high-tech industries.

A private business survey, the Caixin/Markit Manufacturing Purchasing Managers’ Index (PMI)—which focuses more on small and medium-sized Chinese firms—is also expected to show factory activity stuck in contraction last month, with the reading ticking up slightly to 49.6 from 49.4 in June.

The Caixin manufacturing PMI will come out ‪on August 1, and its services PMI survey ‪on August 5.

By Lusha Zhang and Ryan Woo