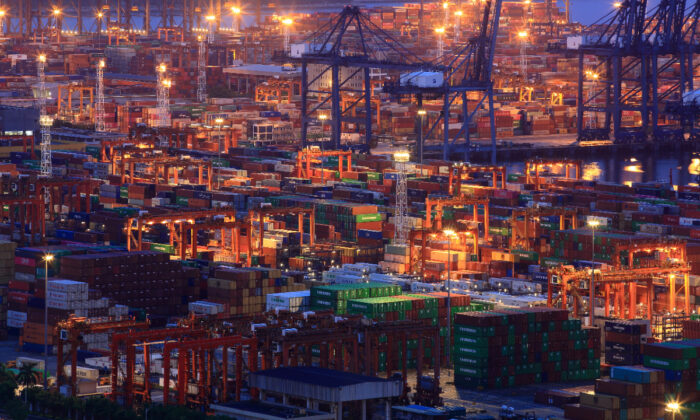 BEIJING—The slump in China’s exports is expected to have extended into March while a collapse in oil price likely deepened a decline in imports, a Reuters poll showed, as the CCP virus cripples the global economy and overall demand.

The pandemic’s sweeping impact on businesses and consumers has triggered an unprecedented burst of stimulus from policymakers around the world in the past two months, but the widespread lockdowns in many economies is seen delaying a recovery in trade both in China and globally.

The grim trade report is likely to reinforce views that China’s economy sharply contracted in the first quarter for the first time since at least 1992. Analysts are already forecasting a steep global recession this year as the virus has prompted worldwide restrictions on movement of people and goods.

Exports from the world’s second-largest economy are expected to have fallen 14 percent in March from a year earlier, according to a median estimate from the survey of 31 economists, slowing the downturn somewhat from a 17.2 percent contraction in January-February period.

Imports, meanwhile, are set to have shrunk 9.5 percent from a year earlier, the sharpest drop since July 2016 and versus a 4.0 percent decline in January-February.

The World Trade Organization last week forecast that goods trade would shrink more steeply this year than in the global financial crisis a decade ago before rebounding in 2021 as the COVID-19 pandemic recedes.

But as the pandemic ravages the economies of China’s trading partners, overseas orders have been scrapped, with many privately-owned exporters firing workers and warning about factory closures in not too distant future.

“Despite some possible improvements in economic activity in March, first-quarter GDP growth is expected to contract by 10 percent from a year earlier,” Wang said.

Investment bank Nomura and ANZ even raised the prospect of a recession in the world’s second-biggest economy, forecasting second-quarter GDP to dip below zero.

A private survey, which focuses more on the export-oriented and small businesses, showed only minimal growth in factory activity in March. Export orders, in particular, remained persistently weak.

The Ministry of Commerce recently has repeatedly highlighted the difficulties confronting Chinese exporters, saying that firms across the board are facing a plunge in overseas orders and logistics logjam due to restrictions adopted by other countries to curb the spread of the virus.

Many forecasters expect China’s 2020 growth could be nearer the 2.0 percent mark the slowest in over 40 years due to the sweeping impact of the pandemic both at home and overseas. The economy grew 6.1 percent last year.

Due to stuttering work resumptions and falling global demand, analysts expect nearly 30 million job losses this year in China outpacing the 20-plus million layoffs during the 2008-09 financial crisis.

By Stella Qiu and Kevin Yao. Epoch Times staff contributed to this report.