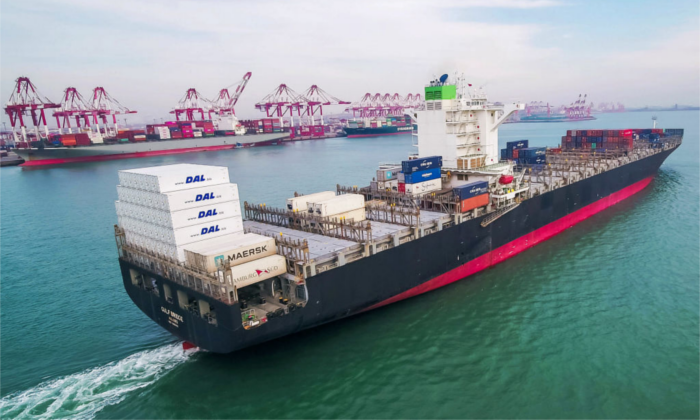 A cargo ship is seen at a port in Qingdao in China's eastern Shandong Province on Dec. 8, 2018. (STR/AFP/Getty Images)
China Business & Economy

China’s exports hit their lowest point in December 2018 compared to the last two years of data, while imports declined as well. This signals the weakening of the world’s second largest economy.

Exports fell by 4.4 percent from the December 2017 data, with global demand decreasing in China’s major markets. Imports also decreased by 7.6, the greatest decline since July 2016.

The Chinese regime has lowered its economic expectations for 2019 to six percent GDP growth.

Despite the slowing Chinese economy, it still held another record in 2018. China posted the largest trade surplus with the United States in 2018, which may give reason for harder stance against the Chinese Communist Party (CCP) in the current trade war.

The slowing demand in China is felt worldwide. For example, Apple and Samsung saw a decline in smartphone sales inside China.

Despite the Chinese Communist Party’s recent stimulus measures, including higher infrastructure spending and tax cuts, the economy still slowed faster than expected at the end of 2018.

There has been speculation among analysts the the CCP may intensify measures that both ease policy and stimulate the economy in 2019.

“Today’s data reflect an end to export front-loading and the start of payback effects, while the global slowdown could also weigh on China’s exports,” Nomura economists wrote, suggesting that exports racked up to avoid the tariffs earlier in 2018.

“The export growth print also suggests that the recent strength of the yuan might be short-lived; Beijing will perhaps be more eager to strike a trade deal with the U.S., and that policymakers will need to take more aggressive measures to stabilize GDP growth,” the Nomura economists wrote.

Net exports had already been a drag on China’s economic growth in the first three quarters of last year. Chinese auto sales fell by 6 percent in 2018. Smartphone shipments slid between 12 to 15.5 percent as well.

Even workers from a state-supported petrochemical group have been demanding unpaid wages, with some seeking legal assistance.

The U.S.-China trade surplus increased to $323.32 billion in 2018, the greatest since 2006, according to Reuters calculations based on customs data.

The political sensitivity of the trade gap, along with China’s weakening economy, shows the possibility of the CCP giving in to U.S. trade demands on issues ranging from industrial subsidies to intellectual property.

China’s large trade surplus with the United States has long been a sore point with Washington, which has demanded Beijing to take steps to sharply reduce it.

On paper, the tariffs seemed to have affected China very little in 2018—one possibility is increased exports from Chinese companies before tariffs came into effect.

However, China exports to the U.S. declined 3.5 percent in December while its imports from the U.S. were down 35.8 percent for the month.

Washington imposed import tariffs on hundreds of billions of dollars of Chinese goods last year and China has retaliated with tariffs of its own.