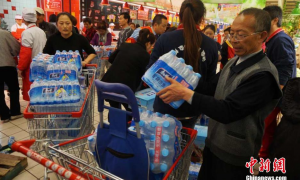 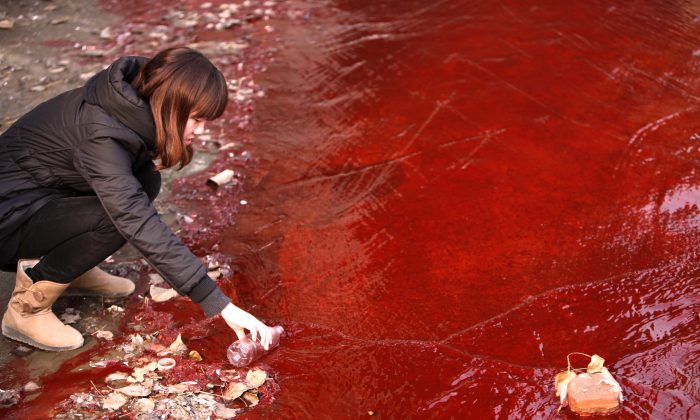 A woman collects samples of the red polluted water flowing from a sewer into the Jian River in Luoyang, north China’s Henan Province, in 2011. (STR/AFP/Getty Images)
China

China’s environment has been so thoroughly assaulted by urban and industrial development that pollution in air, water, and soil has reached alarming levels. “It’s on a scale and speed the world has never known,” according to Jennifer Turner, director of the China Environment Forum at the Woodrow Wilson Center. What do we know? What can be done?

Beijing’s air pollution reached a level so dramatically high in January 2013 that a new word, “airpocalypse,” was coined for it. The word has since been used to refer to the alarming air pollution in Beijing and other Chinese cities.

The smog-choked city experienced a visibility so low that it put schools and work at a halt.

World Health Organization (WHO) measures PM2.5, particulate matter smaller than 2.5 micrometers in diameter, as a health indicator, as it can penetrate the blood stream and enter the lungs, causing respiratory disease, lung cancer, and various other ailments. Safe exposure to PM2.5 is 10 micrograms per cubic meter annually, and 25 micrograms per cubic meter over a 24-hour period—called PM2.5 index 12 and 25, respectively.

A research report released by the Shanghai Academy of Social Sciences in February 2013 ranked Beijing as the second worst in living environment among 40 major cities in the world, according to the Daily Mail. The study considered Beijing “barely suitable” for living due to its severe air pollution.

Smog is especially severe in northern Chinese cities during the winter heating season when coal burning adds to air pollution. In October 2013, the northern city of Harbin had the record PM2.5 index of 1,000, with visibility reduced to less than 50 meters, according to data from China’s environmental protection agency.

China’s unbridled and coal-dependent development serves as the direct cause of air pollution. China consumes half of the coal in the world, used to fuel the world’s second-largest economy.

Air pollution has caused great harm to human health. Based on a “2010 Global Burden of Disease” study published in December 2013 in The Lancet, a British medical journal, air pollution led to 1.2 million premature deaths in China in 2010, which is about 40 percent of the global total.

Air pollution has reduced life expectancy by 5.5 years in Northern China, according to a study done by researchers from China, Israel, and the United States and published in the Proceedings of the National Academy of Sciences last year.

China’s airpocalypse not only chokes the Chinese cities, but also affects other countries through long-range transport of air pollutants. About 40–60 percent of fine particulate pollution in Japan comes from China, said Hiroshi Tanimoto at Japan’s National Institute for Environmental Studies to New York Times. The effect on Korea is even greater. Pollutants have crossed the Pacific to affect the western part of the United States.

China’s airpocalypse goes hand in hand with China’s rank as the top emitter of greenhouse gases, aiding the driver of global climate change and the threat of global warming.

Water ‘Too Dangerous to Touch’

If air pollution is bad enough, water pollution is an even worse problem and more difficult to resolve, said a report by The Economist.

“There are large parts of the urban water supply which are not only too dangerous to drink—they are too dangerous to touch,” said John Parker, globalization editor at The Economist, in a video interview. “You cannot even wash in them.”

Data from the Chinese government in 2011 shows that over half of China’s large lakes and reservoirs were too contaminated for human use. Groundwater, which accounts for one-third of China’s water resources, suffers similar pollution. Of the more than 4,700 groundwater-quality testing stations, about 60 percent showed “relatively bad” or worse pollution level. Half of the rural population lacks safe drinking water.

If China’s air pollution makes airpocalypse, water pollution has created incidents that attract international attention. In 2007, Lake Tai suffered from a heavy carpet of blue-green algae that is cancer-inducing, and its gruesome images have circulated on the Web. The 2006 incident of a chemical spill contaminated Songhua River in Northeast China, and the government cover-up was widely criticized. Many more incidents, however, go under reported.

Some incidents of water pollution can be sadly surreal. Urban waterways in the eastern city of Wenzhou were so polluted by chemicals that a lit cigarette set the water on fire, as reported in the Daily Mail earlier this year. This is not the first time a river was on fire, and other images of water pollution show water turning black or red or orange, or carpeted with algae or dead fish.

A report on chinadialogue indicates that in 2012 over half of China’s cities had water of “poor” or worse quality. Ma Jun, an environmentalist who heads a Beijing-based green NGO, told chinadialogue, “Tackling water pollution is as serious and worthy a challenge for the authority as combating air pollution … water pollution poses a bigger health threat to about 300 million people living in rural areas.”

China Daily, an English-language newspaper published by the Chinese regime, ran an editorial stated, “Soil contaminated with heavy metals is eroding the foundation of the country’s food safety and becoming a looming public health hazard.”

Nearly one-fifth of China’s farmland is polluted, according to China’s Ministry of Environmental Protection and the Ministry of Land Resources. Chemicals such as cadmium, nickel, arsenic, lead, and mercury poison the soil, as they are dumped into waters used for irrigation.

Early this year, the Ministry of Environmental Protection admitted that there are 450 pollution-related “cancer villages” in China. Prior to that, soil pollution and its threat to health and food received limited media attention, and the Chinese government had kept data on soil pollution as a “state secret.”

The change was partly brought about by a recent scandal of cadmium in rice that set off a Hunan rice scare. According to the mainland business magazine Caijing, the city of Guangzhou inspected local restaurants and found excessive cadmium level in 44.4 percent of rice and rice products. Most of the rice came from Hunan Province.

According to Caixin’s New Century Magazine, researchers from the Chinese Academy of Sciences and other institutions had reported on cadmium pollution in 2009. They sampled 100 rice paddies near mines throughout Hunan Province, and found that 65 percent of the samples exceeded the cadmium safety limit. The contaminated rice had entered the local and national market.

WHO’s website states, “Cadmium exerts toxic effects on the kidney, the skeletal, and the respiratory systems.” The heavy metal is leached from mines and chemical factories in Hunan.

Also under the spotlight are Hunan’s new cancer villages, among which, Shuanqiao. China Youth reported that 26 people in Shuanqiao died of cadmium poisoning. Soil samples there showed cadmium content 300 times the permitted level, and 509 of its 2,888 villagers were tested positive for cadmium poisoning. The chemical came from the Xianghe Chemical Plant, whose pollution villagers have complained about since 2006. This example is just the tip of the iceberg of chemical poisoning in China.

Facing catastrophic environmental pollution, the Chinese government has become alert. Prime Minister Li Keqiang announced early this year at the National People’s Congress, “We will declare war against pollution.” Li said, “Smog is affecting larger parts of China, and environmental pollution has become a major problem, which is nature’s red-light warning against the model of inefficient and blind development.”

The Chinese government has plans to clean up the environment. In September 2013, the government launched a $280 billion plan to clean up the air, and early this year, it announced an investment of $300 billion to tackle water pollution. Experts are uncertain, however, whether these investments will change the situation.

What is worrisome is the regime’s persistent attitude of a “war against nature,” that has rendered past investments in the environment limited in their effect. In Mao’s war against nature, draconian actions in agriculture destroyed the fabric of the rural ecosystem. Post-Mao pursuit of economic development has only trumped the past trend with unprecedented pollution in air, water, and soil from industrial and urban growth.

Experts on China believe the root of China’s environmental problems lies with the top-down control by the Communist Party, which has been trapped in corruption and a lack of political accountability and rule of law. Economic incentives for officials have continued to leave pollution unchecked. As some polluting factories are closed, others pop up.

“Environmental problems are one of the main outcomes of a one party-ruled, corrupted, non-humane government,” said Ahkok Wong, a university lecturer in Hong Kong, to the ROAR Magazine.

Environmental pollution has increasingly become a source of discontent and protest in China. In the 1990s, rural protests in China already included pollution-related land loss. Since the 2000s, large-scale protests expanded to cities where citizens reject polluting factories and plants. According to a Pew survey, environmental issues accounted for half of the protests in 2013 in China.

Short of fundamental changes in the political system, it is hard to foresee major environmental improvements.

As Mao obliterated traditional Chinese belief of harmony between human beings and heaven, and as the post-Mao communist regime continues to favor development over the environment, the moral foundation of the Chinese people has also been eroded, aiding corruption and disregard for others and the environment.

Without a rebuilding of a moral system, the Chinese environment will continue to suffer, along with the Chinese people.

Hong Jiang is associate professor and chair of the geography department at University of Hawaii at Manoa. She specializes in China’s environment and culture.