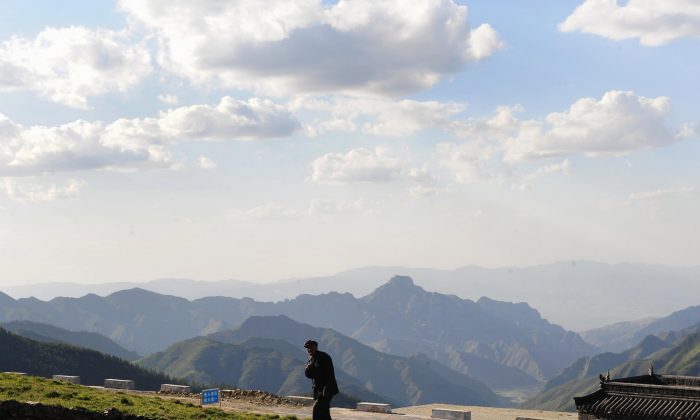 A man walks on Yedou Peak, the highest of Mount Wutai's five peaks at 3058 metres and known as the roof of northern China on June 24, 2009 in Shanxi province. Officials are banned from meeting at such scenic sites, according to a new directive by anti-corruption authorities. (Frederic J. Brown/AFP/Getty Images)
China

Chinese officials, notorious for abusing their positions to get ahead in business and politics, also turn meetings and summits into vacation opportunities.

On May 1, the Chinese Communist Party’s disciplinary agency came out with a list of 21 scenic locales that officials are no longer permitted to convene at. “Though these places have great views, you shouldn’t go there to have meetings,” the notice posted on the website of the Central Commission for Discipline Inspection reads.

Some of the locations include the sacred mountains of Chinese antiquity, such as Mt. Tai of Shandong Province, Sichuan Province’s Mt. Emei, which features a 71-meter tall Buddha statue, or Mt. Lu in Jiangxi Province. Another place on the “forbidden” list is the central Chinese Wudang mountain range, famous for its Daoist temples and the martial arts practiced there.

Photos and portraits of famous people and Party officials hang on the walls of Daoist establishments at Wudang. It is very popular among the cadres.

A local official, speaking anonymously to Peng Pai News, complained about the volume of visitors. “I have to go to different dining events to welcome visiting senior Party officials, but I am afraid that they might not be happy when I show up too late. I drink Chinese white wine as an apology, so a lot of us feel sick to our stomachs.”

“Local police are busy clearing the way when party leaders visit,” a police officer of the Wudang Mountains traffic police unit said. “A police car can be used 140 times per year as a lead vehicle to clear traffic for party leaders coming from and going to Wuhan City which is about 400 kilometers (250 miles) away.”

Mt. Lu, located in Jiangxi, is another popular site now barred from hosting official conferences. It was the site of a major Communist Party meeting in 1959, where Chairman Mao brought down the famous general Peng Dehuai for his criticism of the Great Leap Forward political and economic campaign.