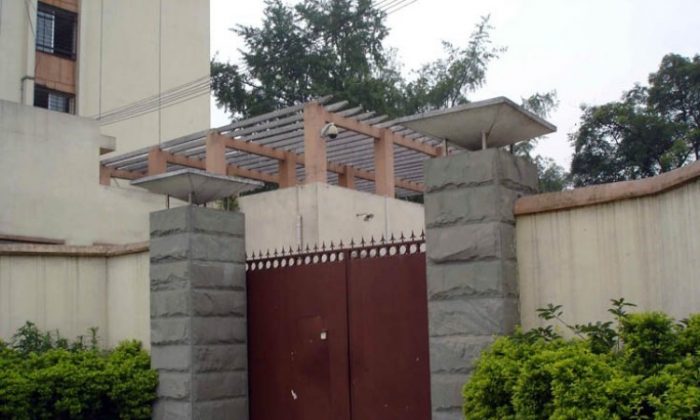 Caption: Entrance to the Chengdu City Legal Education Center; there is no identifying sign, and the gate is often locked. (Minghui.org)
China

Wang Hongliang
View profile
Follow
biggersmaller
Print
A Sichuan woman in her fifties was forcibly admitted by Chinese authorities to a so-called Legal Education Center for brainwashing. Ten days later, she was dead, her body black and blue from beatings.

Ms. Wang Mingrong, a head nurse at Chengdu Rehabilitation Hospital, who practiced Falun Gong, was abducted on Sept. 7 by personnel from the notorious ‘610’ Office, which is in charge of eradicating Falun Gong in China, and by officers from the local police and street neighborhood committee, a sort of spy agency that keeps track of what everyone in the neighborhood is doing.

Wang was taken to the Chengdu City Legal Education Center (LEC), a facility, which is used for detaining and brainwashing Falun Gong practitioners.

A person familiar with Wang’s case, who asked to remain anonymous, said Wang went on a hunger strike to protest the unlawful detention. She was then brutally beaten and force-fed through a tube. Ten days later, Wang was dead. Her body was black and blue all over, but the exact cause of death remains unknown.

Because of pressure from the local ‘610’ Office, Wang’s family did not dare to disclose details of her death, and many of her friends were not informed of her death. Her body was cremated on Sept. 23.

When The Epoch Times contacted the Chengdu City LEC by phone, Li Feng and Yi Decai, the two key persons in charge, did not answer the phone. Another official, a woman surnamed Bao, immediately hung up the phone. A call to Deputy Chief Wang Xuefeng at the local police station also yielded no information.

Wang began practicing Falun Gong in 1998. At that time, between 70 and 100 million Chinese from all walks of life, including high-level communist cadres, practiced Falun Gong according to official regime estimates.

On July 20, 1999 Jiang Zemin, then head of the Chinese Communist Party (CCP), gave orders to eradicate Falun Gong. The ‘610’ Office was formed as an extralegal enforcement agency that, as part of the CCP, worked to reform practitioners through whatever measures necessary, including torture and death, according to the Falun Dafa Information Center website faluninfo.org.

During the years since 1999, Wang was frequently subjected to persecution to force her to give up Falun Gong.

The Chengdu City LEC is located in Caiwan Village of Huaqiao Township in Xinjin County. Outside the premises, there is no sign, and not even a street number sign. Its gate is often locked.

Mr. Xie Deqing, a retired engineer, who practiced Falun Gong, died 20 days after he was abducted by authorities on April 29, 2009 and taken to the Chengdu LEC.

Xie had told his family that he was given an injection of an unknown drug. Upon his death, both of his hands were found to have turned black, with his body gradually turning black as well.

Ms. Tan Shaolan, a young worker at a Sichuan cotton factory, was abducted and taken for brainwashing to the Chengdu LEC in Sept. 2003. Sixteen months later, on Jan. 25, 2005, Tan was returned to her factory’s dormitory. Her coworkers found that she had no facial expression, and did not respond when called by name. She was in a catatonic state, and unable to talk about her experiences at the Chengdu LEC.

Two other Falun Gong practitioners, Ms. Wang and Ms. Li, had also been abducted and taken to similar brainwashing centers.

Wang told The Epoch Times that these so-called “Legal Education Centers” are all over the country. But they are actually illegal institutions specifically set up by the CCP to brainwash and persecute Falun Gong. These centers use all kinds of brutal means to try to force Falun Gong practitioners to give up their belief.

“Brainwashing centers are operated in secret, and very few people know about them. They are not monitored by society and are untouchable by the law of the land. Steadfast Falun Gong practitioners have been imprisoned in brainwashing centers for long periods of time; some have been brutally tortured and some have even been murdered,” Wang said.

Wang was taken to a brainwashing center in Guangzhou in Feb. 2009. She said there was no legal procedure, no legal document was shown to her, and nobody notified her family. For a long time her families had no idea where she was.

Ms. Li said she was kidnapped and taken to brainwashing centers on five separate occasions.

“Just like labor camps and prisons, brainwashing centers often cruelly torture Falun Gong practitioners. In 2002, I was subjected to a particularly cruel torture, where I was tightly tied with ropes for a long period of time. After that, I had difficulty sitting upright for over three years,” Li said.