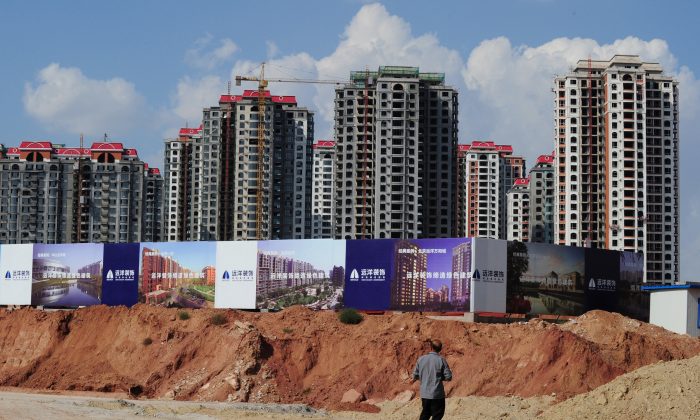 Empty apartment developments stand in the city of Ordos, Inner Mongolia on Sept. 12, 2011. The city which is commonly referred to as a "ghost city" due to it's lack of people, is being built to house 1.5 million inhabitants and has been dubbed the Dubai of China by locals. (Mark Ralston/AFP/Getty Images)
China

China’s Economy Is Threatened by Its Property Market

Record high prices for land parcels were set in early September in major cities, while the overall value of land assets in Beijing has reached 134 trillion yuan, a whopping $22 trillion, more than the gross domestic product of the United States in 2012 (which was $16.4 trillion).

Meanwhile, new home prices in major cities rose at the fastest rate since January 2011 in August.

Analysts said property prices continued to soar because local governments have been under huge debt pressure and need to rely on revenue from land sales to pay their debts. Local government debts could exceed 20 trillion yuan ($3.3 trillion), Liu Yuhui, a researcher at the Chinese Academy of Social Sciences, said during a conference on Sept. 16.

While the market is still booming in first and second-tier cities, crisis is looming in third and fourth-tier cities.

A report published by the China Real Estate Information Corporation in July listed cities with the riskiest property market. The top 50 cities were all third and fourth-tier cities with an oversupply of houses due to population outflows.

Guo Shiping, Director of Research at the Institute for Contemporary Finance at Shenzhen University, dropped a bombshell recently by revealing that in the past year out of the 648 large and medium cities, only 70 cities saw property prices rise, and 364 cities saw prices fall.

Many third and fourth-tier cities have become ghost cities, with an enormous glut of unoccupied housing as a result of urbanization efforts.

Population is a key factor that determines property prices, and China’s population is aging fast after implementing the one-child policy for over thirty years, according to Su Jian, Associate Director of Department of Economics at Peking University.

People will start noticing the effect of declining population on property prices in 2018, Su said, and housing prices will stop their upward trend by or before 2018. The property bubble will burst before 2022, he said.

“Home prices will rise rapidly in Beijing and Shanghai for two to three years before the bubble bursts,” Su added, “But prices will start falling between 2017 and 2018… China’s economy will suffer a great depression.”

Right now what is happening to China’s property market also happened to Japan in the 1980’s, before its property market crashed, said Zhang Weili, a commentator with 21st Century Business Herald, in an article he wrote for the Chinese Financial Times.

Zhang said that research has found out that Japan’s property market crashed in the 1990’s due to the policy of keeping interest rates low for a long period (in order to maintain economic growth) and the existence of a very low land holding tax. China has the same problems currently.

Some Chinese scholars who work closely with the regime argue that if the Japanese government had not raised interest rates so hastily in the early 1990’s, the bubble would not have burst prematurely, according to Zhang. “The mainstream view holds that policymakers shouldn’t proactively pop the property bubble, and should explore ways to achieve a soft landing.”

In the past few years, China has been struggling to “maintain economic growth and prevent inflation, while pushing for economic restructuring,” Zhang said. But the new Party leadership has made it a political priority to maintain an annual GDP growth rate of 7 percent or more, which is in direct conflict with economic restructuring, according to Zhang.

The authorities have adopted a “progressive approach to economic restructuring” out of the fear for a hard landing. But it won’t help, he said. “With such a massive, over-inflated bubble, it’s impossible to avoid a hard landing.”