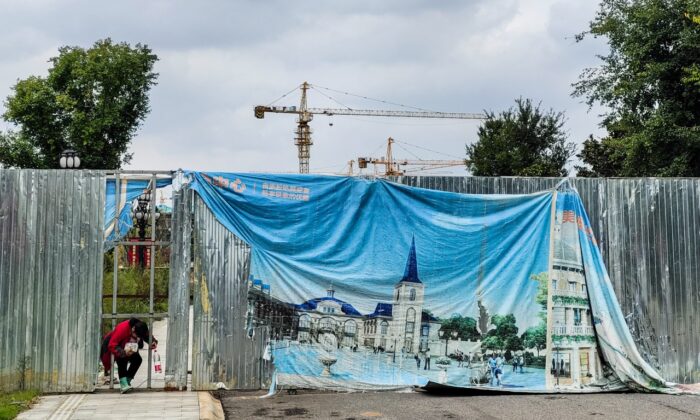 A women through the hole in the billboard in Evergrande Wuhan culture-oriented travel city on Oct. 18, 2021 in Wuhan, Hubei province, China. Evergrande, China's largest property developer, is facing a liquidity crisis with total debts of around $300 billion. The problems faced by the company could affect China’s economy, and the global economy at large. (Getty Images)
China Business & Economy

China’s Economy Is Sputtering. Here’s Why

China’s Manufacturing Purchasing Manager Index (PMI) fell by 0.4 percentage points in October to 49.2, according to official figures from the National Bureau of Statistics. The data were worse than expected, with market analysts expecting a figure of 49.7. (Any number below 50 represents a contraction in manufacturing production.)

This is the second consecutive month that the index has indicated a contraction, and it’s the lowest the index has been since the onset of the pandemic.

Perhaps more worryingly, the data show signs of stagflation—slow economic growth coupled with accelerating inflation. Driven by increases in commodity prices, the sub-index for output prices rose to 61.1, its highest level since 2016. But at the same time, a lack of demand is driving the contraction in production. The combination of high inflation and weak consumer demand could create a vicious negative feedback loop.

“About one-third of the surveyed companies listed insufficient demand as their biggest difficulty, indicating inadequate demand had restricted their production,” Zhang Liqun, an analyst at the China Logistics Information Center, told Reuters.

But this is only the most recent data point in a series of negative economic news coming out of China. The world’s second-largest economy is unambiguously sputtering, leaving authorities stuck in a bind as they attempt to navigate long-term goals with short-term needs.

The manufacturing numbers only serve to reinforce the disappointing gross domestic product numbers published in October. The National Bureau of Statistics reported that the country’s economy grew by only 4.9 percent in the third quarter, slowing from 7.9 percent in the second quarter.

Power outages have been a core headwind to Chinese economic activity. The energy crunch has been driven by a variety of factors that have combined to cripple the country’s power sector.

Demand for energy has been unusually high, driven by unseasonably cold temperatures and high demand for Chinese goods from other countries as they’ve exited the pandemic.

But as energy demand has increased, supply has been restrained by authorities. China removed a valuable source of imported coal when it cut coal purchases from Australia at the end of 2020, a move critics say was aimed at punishing the country for calling for an investigation into the pandemic’s origins.

The Chinese Communist Party’s carbon-neutral targets have led to lower domestic coal production. Government regulation capping electricity prices has meant that power plants haven’t responded to these forces, which have resulted in a self-inflicted surge in energy prices and energy rationing across the country, stunting economic activity.

To compound the issue, even with the slowing production, the global shipping crisis has meant that Chinese manufacturers haven’t been able to capitalize on high global demand for their products.

“It is clear that economic momentum is slowing quickly and supply chain pressures are compounding this weakness,” Mitul Kotecha, chief emerging markets Asia and Europe strategist at TD Securities, wrote in a Nov. 1 research note.

Though power shortages and supply chain issues are unlikely to be a long-running headwind on the economy, one can’t ignore how sensitive China’s economy has been to these developments.

Perhaps most worryingly is the property market, which has continued to slide and shows little sign of abating.

Low consumer demand, high leverage, and regulatory hurdles have seen a string of Chinese property developers, most notably Evergrande, run into liquidity and debt troubles. And these troubles likely run deeper than just a few firms. Bloomberg reported that two-thirds of China’s top developers have breached at least one of the “three red lines,” a series of regulatory interventions designed to deleverage the industry.

Consumers have understandably become cautious in the face of all of these debt troubles. According to property research firm China Real Estate Information Corp., new-home sales for the top 100 developers fell by 32 percent year-over-year in October. As new-home sales dry up, this will amplify any liquidity concerns faced by property developers.

With property accounting for about 25 percent of China’s economic activity and a substantial portion of assets held by households, the slide in the property market will undoubtedly weigh heavily on growth.

Adding to the economic headwinds, China has continued to enforce a stringent COVID-zero strategy. Outbreaks are still met with heavy-handed and disruptive lockdowns, with the retail sector being particularly sensitive to these measures. With authorities showing no signs of changing their strategy, further disruptions to consumer spending and production will undoubtedly occur.