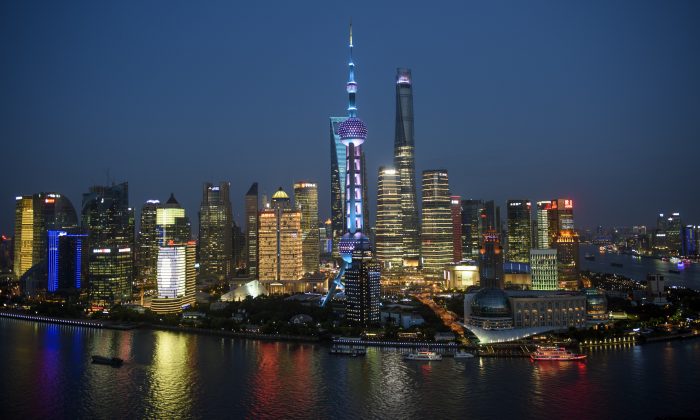 Ships pass by the skyline of the Pudong Financial District in Shanghai on Aug. 14, 2015. (Johannes Eisele/AFP/Getty Images)
Thinking About China

While the Chinese Communist Party (CCP) has predicted 5.5 percent economic growth in 2022, indicators show that Beijing is under the illusion of wishful thinking.

“China, this year, will be lucky to avoid contraction,” analyst Gordon G. Chang told The Epoch Times in an email. “The country ended 2021 with plunging growth. This year has been worse with declining consumption, spreading COVID lockdowns, and proliferating defaults.”

Chang wrote “The Coming Collapse of China,” a 2003 book that predicts the economic and political implosion of China under the weight of its communist regime.

“Local governments are tight on cash as the all-important property sector collapses,” he told The Epoch Times. “Add in geopolitical tensions with China’s most important customers and supply chain disruptions galore.”

Xi’s proclivity and admiration for Russia, even as Russian President Vladimir Putin destroys a neighboring democracy—and his own economy in the process—doesn’t augur well for China, at the helm of which is a man who wants to repeat Putin’s approach in Taiwan.

Peggy Hollinger noted in the Financial Times that the two-hour attempt by U.S. President Joe Biden to obtain Xi’s support against Putin simply ended in mutual threats of economic sanction, serving as “a wake-up call” for foreign companies in China.

“The risks of doing business in China have been escalating for some time,” Hollinger wrote in her March 23 article.

“Tensions between Washington and Beijing over technology exports, the mass incarceration of 1mn [1 million] Uyghurs and other Muslim groups in Xinjiang, and the crackdown in Hong Kong, have forced many companies to think about contingency plans. Supply chain disruptions caused by the Covid pandemic then drove home the dangers of relying on China for key components or products.”

Putin’s invasion led to a mass exodus of foreign companies from Russia, both for fear of sanctions and of the reputational risk of making money in a country that’s bombing civilians next door. Within four weeks of the invasion, more than 450 businesses had announced their withdrawal from the country, according to a Yale study.

“The lesson of Russia’s invasion is not just that the unthinkable can happen,” Hollinger wrote, “but that the consequences can play out at a speed and scale few had imagined possible.”

She cited corporate attorneys who now advise clients to consider “asset light” approaches to China, such as franchising or licensing rather than high-stakes ownership.

“At the very least, diversification of manufacturing elsewhere in Asia, or even further afield, should be a priority,” Hollinger wrote.

Xi’s attempts to reform the economy are of particular concern among investors because they signal a future direction for China away from a globally-integrated market economy.

While Xi’s claims of environmental sustainability and inequality reforms are surface-level at best, his deeper cuts to economic growth will come from misplaced subsidies, regulatory clampdowns on successful and prominent businesses that pose a political threat to the CCP, and a controlling approach to combating the pandemic, which continues to delay the day of reckoning rather than avoiding it altogether. The cost is extending the economic pain to China’s economy.

Tencent is a recent example of a successful Chinese tech company that was hit hard by Beijing’s regulatory clampdowns. Revenue growth slowed to 8 percent in the third quarter, its weakest since listing in 2004.

Last year, the CCP imposed sweeping regulations against the company, including restricting children to just three hours of video games per week. Some of Tencent’s game teams were forced to implement the costly restrictions, rather than create new games.

Beijing also restricted children’s online education, which contributed to a fall in Tencent’s ad revenue by 13 percent in the quarter, from last year. Tencent executives expect fewer hires in 2022.

The fundamental problem for China’s state-led economy is the state-led part. States, especially those controlled by dictators, tend to maximize their power rather than economic gains and accept far greater risk than democracies.

A return to the decentralization and entrepreneurial dynamism that would give China some hope is fundamentally at odds with Xi’s aversion to markets and greed for more personal control over China’s economic power. Because of his ballooning political power, that drive manifests as continued and increased centralization of the economy under the historically disastrous management of the CCP.