The Tri-Lobed Disc of Sabu
0

Former Ballet Dancer: 'Unbelievable, out of this world, those magical, almost ethereal beings!'
0 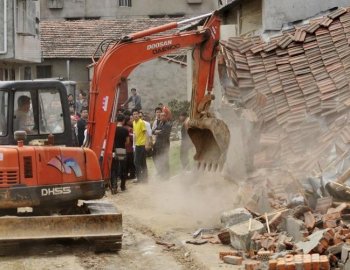 Chinese authorities carry sticks as they stand guard while workers demolish houses which are claimed illegal by the local government in Wuhan, central China's Hubei province on May 7, 2010. (AFP/Getty Images)
Opinion

China’s Economy Bolstered by the Sale of Bloodstained Land

Michelle Yu
Print
The Chinese regime is selling off the people’s land at a furious pace to hike up the state’s gross domestic product (GDP) index, fill its coffers, and line officials’ pockets. Meanwhile, millions of ordinary people have become land grab victims, faced with displacement, destitution, and violent assault by callous officials if they resist eviction. The general public is becoming increasingly sensitive and outspoken.

In an online poll 7,500 Chinese were asked to summarize what the year 2010 meant to them. One fourth of respondents expressed their sentiments with the Chinese character “chai,” which means “demolish.” It indicates how forced demolition in China has become a profound and ever-present threat for ordinary people there.

All land in China is owned by the state. When one buys a home in China, technically one only owns the house—but only so long as it suits the government. At any time, the government can tell you that it wants its land back, as it has a more profitable use for it, and that your home will be bulldozed. Farmers can only lease the land, and when told to vacate, their livelihood is also threatened.

In 2010, local governments sold 1,652 square miles of land, over twice as much as in 2009. Revenues from land sales were 2.7 trillion yuan (approx. US$410 billion), accounting for 7.3 percent of the country’s GDP, according to official statistics .

Topping the list is Beijing, which sold 11.6 square miles of land last year, a 54.2 percent increase over 2009. In this densely populated city, where the per capita land area is less than 0.0003 square miles, this huge area of land sales amounts to about 40,000 people’s shares of land.

The land sale frenzy is driven by local government’s requirement to help keep the GDP numbers up and profiteer along the way. In 2010 the Beijing municipal government earned 90 billion yuan (US$14 billion) from land sales, or equal to 45.9 percent of its annual fiscal revenue.

In many other cities, income from land sales accounts for up to 60 percent of total revenues. For the central government, net profits from land sales are as high as 30 percent, according to state media .

Land expropriation is pushing the lower income classes into abject poverty and is a threat to China’s social stability.

Victims of relocation say the compensation they are given is not nearly enough to purchase a comparable home in the same region. Farmers who had to leave their land also say that it is extremely difficult to find a job or to support their families on the scant government compensation.

Though no statistics have been published on the fairness of land compensation, a recent State Council research study indicates that only 5 to 10 percent of income from land sales was allocated as compensation to farmers, while the government and developers shared the rest.

In a Jan. 7 national conference , Xu Shaoshi, the head of the Ministry of Land and Resources, described China’s land transfer system as “allocating profits unfairly” and “causing sharp social conflicts.”