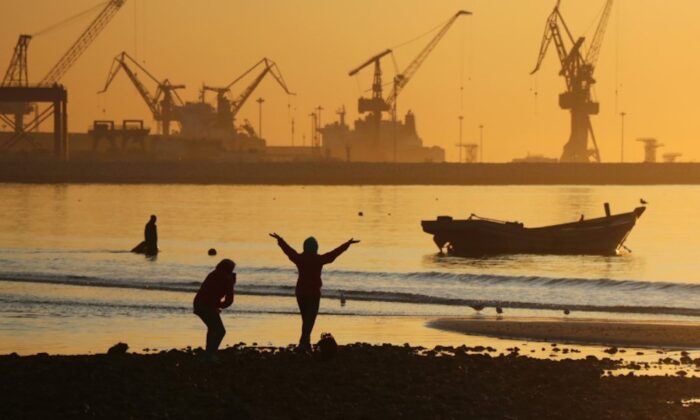 People enjoy the beach near a port during sunrise in Qinhuangdao, Hebei Province, China on Oct. 15, 2019. (Reuters)
By Reuters

BEIJING—China is expected to post its slowest economic growth in 30 years in 2020 as domestic and global demand remain sluggish, a Reuters poll showed on Jan. 14, reinforcing views that Beijing will roll out more support measures.

This year is crucial for the ruling Communist Party to fulfill its goal of doubling gross domestic product (GDP) and incomes in the decade to 2020, but risks to growth still loom large despite a trade deal with the United States that will relieve some pressure on Chinese exporters.

China’s economic growth is expected to slow to 5.9 percent this year, according to median forecast of 83 economists polled by Reuters, which would mark the weakest clip since 1990 and a further easing from an expected 6.1 percent in 2019.

The United States and China are expected to sign the Phase 1 trade deal on Wednesday, de-escalating a prolonged confrontation that has rattled financial markets. But Washington will not roll back all of its punitive measures, and the risk of another flareup remains.

“The negative impact (on the economy) from U.S tariffs will start to fade in the second quarter, but given the global economy is slowing, exports could still face some downward pressure,” said Bank of Communications economists in a report.

“The fact is, with or without a deal, China-U.S. relations cannot go back in time,” said Zhang Monan, analyst at China Center for International Economic Exchanges.

“The structural issues between China and United States, the U.S. crackdown on Chinese technology and partial decoupling between the two countries will make frictions the new normal.”

China’s economy was already slowing before the trade war erupted 18 months ago, as a regulatory crackdown on debt and riskier types of lending led to a sharp slowdown in investment. Since the trade dispute escalated, business and consumer confidence have softened.

But November data and December factory activity surveys have pointed to signs of improvement in the manufacturing sector as trade tensions eased and Beijing rolled out more stimulus measures.

Policy sources have told Reuters that Beijing plans to set a lower economic growth target of around 6 percent this year from last year’s 6-6.5 percent, relying on increased infrastructure spending to ward off a sharper slowdown.

“We think the policy support would not falter this year but its effect could be more pronounced amid lower trade-related risks,” said Robin Xing, chief China economist at Morgan Stanley, in a news conference in Beijing last week.

Beijing is likely to increase its budget deficit ratio again this year, while hiking the quota for the issuance of local government special bonds, Xing said.

The PBOC is expected to lower RRR by another 100 basis points (bps) by the end of 2020, on top of a 50 bps move announced on Jan. 1, according to the poll. The New Year’s Day cut was the eighth since early 2018 as the central bank frees up more funds for banks to lend.

Analysts expect the LPR will be cut by 25 bps this year.

But officials have repeatedly pledged not to resort to “flood-like” stimulus like that in past economic downturns, which left a mountain of debt and stoked fears of property market bubbles.

Inflation is likely to hit 4.4 percent in the first quarter as outbreaks of African swine fever decimated the world’s biggest pig herd, but its impact is unlikely to last and should not derail the PBOC’s easing stance, analysts say.

China’s consumer price index (CPI) in 2020 will likely rise 3.1 percent from the previous year, according to the poll.

China plans to keep its inflation target at around 3 percent in 2020, unchanged from last year, sources have told Reuters.