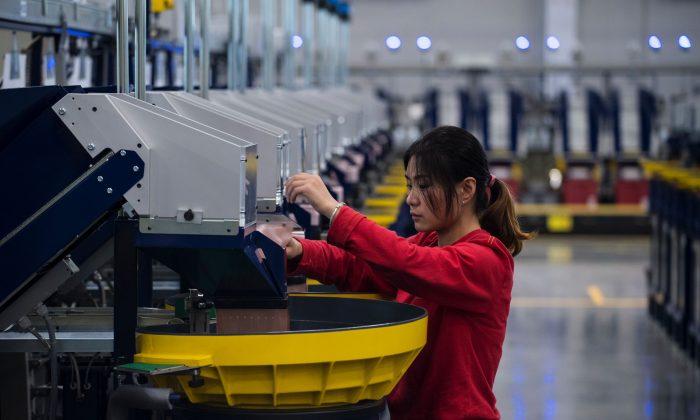 A worker checks the production in the packaging section of the newly opened Lego factory in Jiaxing, Zhejiang Province, China, on Nov. 24, 2016. (JOHANNES EISELE/AFP/Getty Images)
China

The economy is improving, but financial markets aren't buying it
By Valentin Schmid

Every decade or so in the United States, the financial sector decouples from the real economy, like what’s happening currently: GDP growth is tepid, job growth is mostly part-time, corporate earnings don’t grow at all, and yet, stocks are at record highs.

In China, it’s the other way around. GDP growth, at least according to official numbers, but also by some independent estimates, is around 6 percent. Unemployment is stable by regime dictate, inflation is coming back, and corporate profits are growing.

But stocks are trading at late 2009 prices, about 40 percent off the bubble top of 2015. Government bonds are trading at two-year lows, and the currency lost 6.8 percent against the dollar in 2016.

To shed light on this dichotomy between finance and the real economy, Epoch Times spoke to Alicia Garcia-Herrero, the Asia-Pacific chief economist at French investment bank Natixis.

Epoch Times: How do you see China’s economy faring in 2017?

Alicia Garcia-Herrero: It’s a relatively better real economy, but the financial markets don’t believe it. That’s the story right now, and I think this will continue in 2017. There is a dichotomy between the real economy and the financial part of the economy.

I think that’s going to continue, no matter what they do regarding capital controls. I don’t think they can stop it from happening, maybe they can delay it. So the renminbi (RMB) will continue to depreciate against the U.S. dollar because intervention costs them a lot of foreign exchange reserves. And the market doesn’t believe that the currency is naturally stable either.

Epoch Times: How much do you think the RMB will devalue?

So everything is relatively stable except for the fact that the growth is not credible. Otherwise, you would see a reversal in outflows. The improvement in the real economy is not perceived as sustainable. Would the RMB depreciate if the economy was improving?

Everybody knows the RMB needs to depreciate because the improvement in the real economy has only been possible because of huge credit growth, which can’t be sustained forever.

That’s the story, the dichotomy between the real sector and financial markets. Chinese investors, let alone the rest of the world, don’t buy the improvement.

Epoch Times: Why are the People’s Bank of China’s (PBOC) actions counterproductive?

It’s a one-way bet, no matter what you do. So you have that one-way bet with the currency and interest rates are repressed in China. Why would you come in?

Unless they are lucky again, like in early 2016, and the dollar starts to depreciate. Then foreign exchange reserves could stabilize again. They stabilized in 2016 just because the dollar depreciated and the assets they have denominated in euro, yen, etc., by definition rose in value.

Epoch Times: Why are outflows bad for the economy?

Ms. Garcia-Herrero: As dollars or RMB move out, no matter how much you inject as the PBOC, your balance sheet shrinks. You need to sterilize the outflows.

This is why we have massive monetary stimulus, to substitute for the foreign exchange reserves. But now even funds denominated in RMB are leaving.

They first go to Hong Kong and Singapore, and then they convert to dollars, buy diamonds, buy real estate, or are gambled away in Macau. Eventually, they should go back to the mainland at some point. But they are not fully convertible, so the RMB are going to hang around outside the mainland’s financial system for a while.

So when the RMB leave, the balance sheet of the central bank shrinks as well. So it’s difficult for the PBOC to keep the credit growth going. The PBOC has to be increasingly expansionary if the outflows continue, just to stabilize the financial system.

It’s like putting fuel onto the fire. The more you do that, the higher the expectation of a depreciation because you are injecting more currency.

This is the dilemma for the PBOC. They need to support the economy, but by doing that, they create additional depreciation pressure on the currency. The currency leaves China in dollars or RMB and that reduces the balance sheet, so they have to inject again.

Epoch Times: Is there something that could break that cycle?

Ms. Garcia-Herrero: They need something magical, like a weaker dollar. Something that changes the dynamics for the real growth to be sustainable. It would have to be quite big.

So no horrible news for 2017, but I don’t see 2017 as a solution to the problem either. More of the same thing, a vicious circle. Everybody says China is different, but at the end of the day, they don’t have a hard currency. These problems happened 10 years too early, before they got a real hard currency.

A depreciation of the dollar would buy them time, but that’s all.