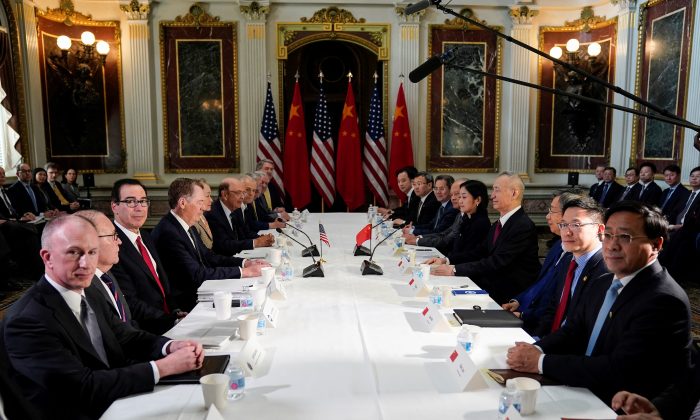 China’s Economic Crisis Is Its Own Doing

State planning is a liability, not an asset

From both official and nongovernment figures, it’s clear the Chinese economy is in dire straits. In the second half of 2018, estimates of China’s GDP growth ranged from around 6 percent to negative 1.6 percent, indicating a sustained downturn.

The rapid development of China’s economy over the past two decades has basically depended on the interplay of three factors.

Both these factors have long been the subject of expert discussion, but there is a third factor that has passed almost unnoticed: the series of Chinese policy reforms that brought nonmonetary economic activities into the monetary economy.

An essential feature of a modern economy is monetization, that is, the use of currency to quantify and account for all economic activity. In a pre-modern society, economic activities are less likely to be measured by currency—for example, people surviving on subsistence farming and thus foregoing trade and currency. On several occasions prior to the 1980s, the International Monetary Fund (IMF) measured China’s economic development by purchasing power parity (PPP), and estimated that China’s GDP per capita was about $2,000, but at that time, China’s nominal GDP per capita was only $300. In 1996, the IMF issued a report, also measured in PPP, estimating that China’s GDP per capita was about $6,000 to 7,000, while the nominal GDP was only about $500.

This changed in the late 1990s, when China launched a series of “reform measures” affecting real estate, health care, education, pensions, and the like. At the core of this economic modernization was, in fact, the process of monetization. Housing previously not counted in nominal GDP was brought into the economy via the reform, as was medical service. Before the economic reforms, health care was treated as a public good—the concept of costs and revenue didn’t apply and all was borne by the political system. The market reforms subjected all such public services to monetization, thus bringing up nominal GDP.

In China’s current economic development, the advantages brought by these three factors have been basically exhausted. The process of economic monetization has been completed. Export growth is difficult to sustain, and the wealth generated by monetary easing and investment via governmental loans can’t match the intrinsic value of those investments.

The Sino–U.S. trade war, real estate bubble, and financial crisis are just symptoms of the structural limitations that form the root cause of China’s economic troubles.

Much has been made of China’s transition from low-level manufacturing to high-tech industries over the last decade. China has definitely progressed on this front, but it’s still far from being competitive enough to support continued rapid economic growth. Since 2018, Chinese state media have been boasting about the “four new inventions,” but one of them, the bike-sharing venture, is on the verge of bankruptcy.

Like bike sharing, the rest of the “four new inventions” are mainly innovations of service models, and don’t actually feature cutting-edge technology. It is difficult to significantly overhaul industry without a strong tech innovation sector, which China still lacks.

Ten years ago, the city of Ningbo in southeastern China announced a fantastical plan to “manufacture one or two hundred Steve Jobs-style technological innovative figures.”

According to Peter Drucker, an Austrian-born U.S. management consultant, educator, and author, who has been described as “the founder of modern management,” the biggest enemy of innovation and entrepreneurship is authority and central planning. China’s state planning is the biggest obstacle to innovation and entrepreneurship. Moreover, the basic values of China’s authoritarian system assume that the political elites have more wisdom and perspective than ordinary citizens. This attitude stifles innovation, making it unlikely that China can produce even one Jobs-style entrepreneur under the current model of development, let alone upgrade its entire industry.

Central planning is good for developing countries because it can set basic goals and reach them. But once this phase is over, central planning becomes a liability, not an asset. While the Chinese regime elites continue to defend this system and arrogantly proclaim its superiority, the actual result is an economic quagmire.

Zang Shan is an international affairs analyst specializing in U.S. and China affairs.