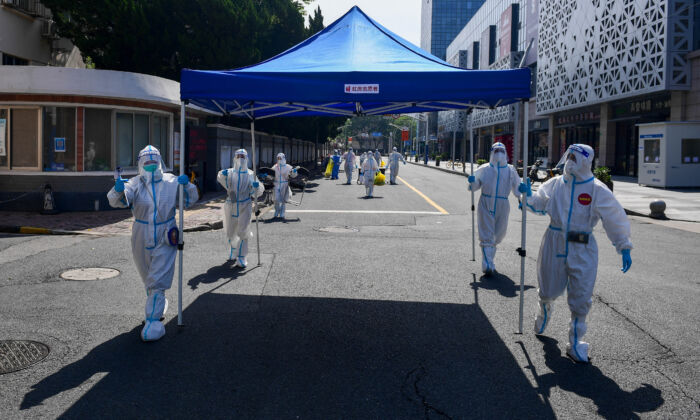 Workers in protective suits move equipment for a makeshift nucleic acid testing site to the next residential area after wrapping up the screening at a compound in Shanghai on May 14, 2022. (cnsphoto via Reuters)
China Business & Economy

China’s economy is paying the price of the communist regime’s “zero-COVID” policy that has placed tens of millions of people across the country under lockdown, with retail sales and factory production sliding to their worst level since the onset of the pandemic.

The National Bureau of Statistics on May 16 released April’s economic data, which showed declines even steeper than economists had expected.

Retail sales, which had already entered into contractions last month, plunged 11.1 percent from a year earlier, the biggest contraction since March 2020, worse than the 6.1 percent drop forecast by Reuters.

Factory production fell 2.9 percent from a year earlier, the largest decline since February 2020 and a reversal of a 5 percent gain in March.

Meanwhile, the unemployment rate rose to a two-year high of 6.1 percent.

“In April, the epidemic had a relatively big impact on the economic operation,” Fu Linghui, a spokesperson at China’s statistics bureau, told Monday’s press conference. Fu added the impact was “temporary.”

But analysts and investors are not so optimistic. Economists said the current downturn is harder to shake off than the one seen at the beginning of the pandemic, in early 2020, with exports unlikely to swing higher and policymakers limited in their stimulus options.

“The upshot is that while the worst is hopefully over, we think China’s economy will struggle to return to its pre-pandemic trend,” said Capital Economics analysts.

Property sales by value in April were down 46.6 percent from a year earlier, the fastest rate in 16 years, according to Reuters calculations based on official data released on Monday. The property market, an engine of the country’s economy, has seen a severe slump since last year after Beijing tightened property developers’ excessive borrowing.

Monday’s weak data added to a string of signs of a slowdown of the country’s economy which had already taken a hit as the authorities last year cracked down on its homegrown tech giants, once a booming industry generating numerous benefits and jobs.

Citigroup on Monday further revised down its forecast for the second quarter to 1.7 percent, and the full-year forecast was cut to 4.2 percent from 5.1 percent.

While authorities are expected to roll out stimulus measures to support the economy, analysts say the effects are uncertain as the Chinese regime holds tight to its zero-COVID policy. The draconian approach is aimed at eliminating any infection among communities by mass testing and quarantining everyone at risk, leaving dozens of Chinese cities repeatedly experiencing lockdowns and reopening.

“The data paint a picture of a stalling economy and one in need of more aggressive stimulus and a rapid easing of COVID restrictions, neither of which are likely to be forthcoming anytime soon,” said Mitul Kotecha, an analyst at TD Securities.

Worries of a potential lockdown of Beijing still exist among residents and analysts. The Chinese capital is testing nearly the whole city after a handful of cases were reported. Dozens more residential complexes where new infections registered were sealed off on Monday. Though officials denied any plans of locking down, they have gradually stepped up movement restrictions since late April.

Also on Monday, Shanghai officials provided a timetable for lifting the lockdown that has lasted for over seven weeks, saying they planned to reopen from the start of June. Residents, however, remain skeptical after officials have repeatedly dashed their hopes for an end to the ordeal. The initial lockdown plan was expected to last only eight days when it was introduced in late March.

Even if the financial hub were to fully reopen, analysts at ANZ said the impact of Shanghai’s lockdown is far-reaching.

“With total factory productivity yet to catch up, China’s growth will likely stay at the low end of the 4.0-5.0 percent range in the next few years,” ANZ said.