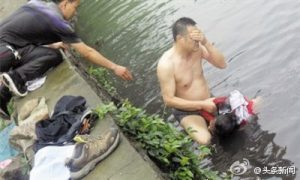 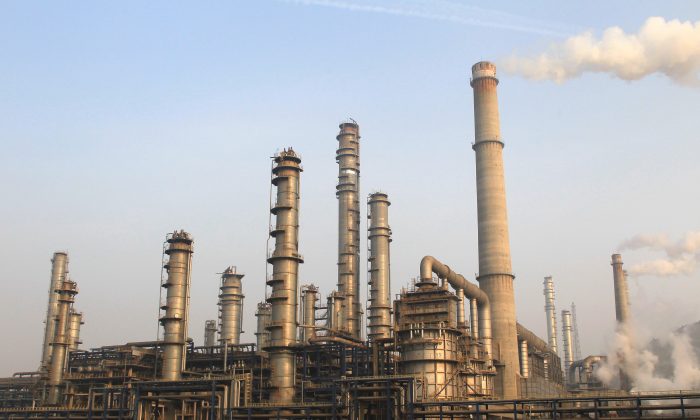 This file photo shows a chemical plant in the city of Dalian, in northeast China's Liaoning Province, on Jan. 18, 2013. Journalists in China say that some chemical plants in China are polluting the groundwater by pumping waste into wells. (STR/AFP/Getty Images)
China

Following outrage among netizens, demands by Beijing attorneys, and media pressure, the Chinese Ministry of Land and Resources recently issued a report on the quality of the nation’s groundwater. The report has failed to address the scope or the severity of the problem, say critics.

Concern about groundwater seized the public’s attention in early February after blog posts by the journalist Dong Fei about the pumping of industrial waste water underground in eastern China’s Shandong Province. Chemical and paper plants in Jiangsu Province, just south of Shangdong, and in Huabei (a region of several provinces in northern China) were also reported using wells to dispose of their waste water.

By mid-February 2.9 million netizens published posts with pictures of water pollution in their hometowns in response to a request from Dong.

Three Beijing attorneys then publicly requested that the authorities publish official data on China’s groundwater pollution and media in China took up the issue.

Environmental scientist Zhao Zhangyuan , a retired member of the Chinese Research Academy of Environmental Sciences, told the state-run Jinghua Times (a subsidiary of Communist Party mouthpiece People’s Daily) that the report used outdated 1993 standards, which do not test for many organic pollutants that make up the bulk of modern pollution.

The Nanjing Survey Center of the Chinese Academy of Geological Sciences monitored groundwater near the Yangtze River Delta—a heavily urbanized area in eastern China that includes Shanghai—and found that it contained cancer-causing chemicals such as dichloroethane and dichloromethane, and other organic chemicals known to affect the nervous system, kidneys, and liver, such as toluene and chloroform. None of these chemicals are covered under the 1993 standards.

Available evidence suggests that China suffers from groundwater pollution on a much larger scale than the authorities have been willing to disclose.

Studies done by the China Geological Survey since 2006 show that in the Huabei region, only 22.2 percent of the region’s groundwater was safe to drink. Groundwater makes up the bulk of the region’s drinking water supply.

According to the Qianzhan Industry Research Institute, a Shenzhen-based think tank, China will increasingly turn to groundwater sources for its drinking water supplies between now and 2017, due to the country’s relative lack of water resources.

The research institute projects that approximately 70 percent of the Chinese population, or over 400 out of China’s 660 cities, will draw their drinking water primarily from groundwater sources.

China’s rural population draws most of its drinking water supplies from wells, which tap into shallow-level groundwater sources. However the indiscriminate use of fertilizer and pesticide has severely polluted groundwater in the countryside.

According to a Voice of America report, groundwater in the Huabei region has been found to contain heavy metals far exceeding allowable limits, including mercury, chromium, cadmium, and lead.

In addition, organic substance pollution has appeared in: the southern suburbs of Beijing; Shijiazhuang, the capital of northern China’s Hebei Province; Jinan, the capital of Shandong Province; and the Yuxi Plain in Henan Province. The main pollutants are benzene, carbon tetrachloride, and trichloroethylene, all of which can cause cancer and other health problems.

Besides these pollutants, at least 100 million people in China are drinking groundwater with dangerous levels of arsenic, which can cause cardiovascular problems and an increased risk of cancer, as well as fluorine, which is known to cause bone deformities in children and kidney problems.

According to the Voice of America report, companies throughout China have been digging wells for the sole purpose of discharging industrial effluent into the groundwater for the past 20 years.

Chinese netizens have since gone online to express their unhappiness over the issue. On Sina Weibo—a popular microblog service similar to Twitter—a user named Wang Pan wrote, “Large businesses are heartlessly pumping pollutants into our groundwater supply, and yet the government, blinded by political goals, has ignored and even openly tolerated this.

Wang Pan’s account was removed shortly after the comment was posted, showing the regime’s unwillingness to allow free discussion of the problem.

According to Fan Xiao, a geologist and chief engineer at the Sichuan Provincial Bureau of Geology and Mineral Resources, China currently lacks official regulations on the discharge of wastewater into groundwater sources, and state agencies lack the capability to enforce regulations.

“[We] are heavily reliant on our groundwater sources, and if they become polluted, cleaning them up will be virtually impossible,” Fan said.

Rapid urbanization has driven the growth of both the extent and severity of mainland China’s groundwater pollution problems. Key to this is the communist regime’s single-minded pursuit of GDP growth.

According to the 2012 Chinese Cancer Registry Annual Report, due to extreme levels of environmental pollution, there are 3.5 million new cases of cancer in mainland China every year, resulting in 2.5 million deaths annually. This is the equivalent of 8,550 new cases of cancer being diagnosed every day.