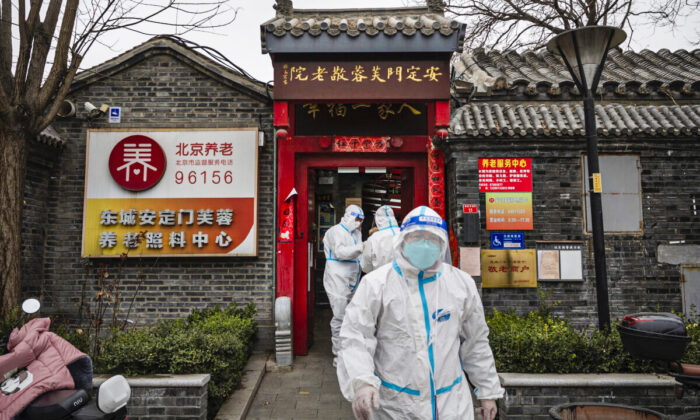 Health workers wear protective suits as they stand outside a seniors care home in a traditional courtyard house where they were performing nucleic acid test to detect COVID-19 on local residents in Beijing, China, on March 25, 2022. (Kevin Frayer/Getty Images)
By Eva Fu

After two years of living under some of the world’s most restrictive COVID-19 policies, a growing number of Chinese residents appear to have finally had enough.

Rumblings of frustration can now be heard from inside residents’ buildings, on the streets, in hospitals, and on school campuses, a rare show of defiance in a country known for its regime’s swift and heavy retaliation against even the faintest murmurs of dissent.

“We can’t stand this anymore,” shouted a crowd of workers earlier this month in the locked-down Futian district in southern China’s Shenzhen, the country’s tech hub, as a dozen health workers stood on the other side of plastic barriers. “Lift the lockdown. We demand lifting the lockdown!”

In another neighborhood in the city, fed-up residents banged on pots and pans for hours from their balconies after learning that their already two-week home confinement would continue.

Elsewhere in the city, incensed locals had a showdown with local officials, toppling a checkpoint booth and tearing up metal fences after being told by one health worker that they’d “better not get out for several months or even a year.”

Near the city’s border, stranded migrant workers filled the streets, demanding to go back to their homes in nearby Daya Bay.

The outcry displayed over the past weeks has been unprecedented as the Chinese regime has imposed a series of lockdowns affecting tens of millions of people, suggesting a change in mood among the greater Chinese public. The country’s official daily infection tally driven by the Omicron coronavirus variant climbed to 8,800 on March 29, a steep jump compared to just months ago, when cases were registered in double digits. Yet Beijing’s official virus figures should be viewed with skepticism, according to experts and residents, who point to the regime’s pattern of concealing information that’s deemed to be damaging to its grip on power.

China, at one point lauded for its severely restrictive COVID-19 measures, is now among the world’s last holdouts of the zero-COVID policy, a playbook chiefly consisting of aggressive testing, isolating anyone exposed to the virus, and locking down areas where cases emerge. The approach has disrupted entire industries and supply chains while leaving confined residents struggling to find basic supplies and medical care.

Earlier this week, China’s financial center, Shanghai, started implementing the country’s largest lockdown to date, confining the city’s population of 26 million people, a half at a time. Until the day before the lockdown announcement on March 27, officials in Shanghai, now identified as the worst virus hotspot in the current COVID-19 wave, insisted they wouldn’t take such a step, owing to the economic pains it could inflict upon the country and the world.

Meanwhile, the patience of the Chinese public appears to be wearing thin.

“Why can’t China drop the COVID restrictions like the rest of the world?” some users on China’s heavily policed internet asked.

A hashtag containing this question was viewed more than 540 million times over the past week.

The country’s largest protest came on March 23, when hundreds of small-business owners from Sijiqing, a popular wholesale clothing marketplace in the eastern Chinese city of Hangzhou, came to a standoff with the police after demanding to be refunded their rent. Officials in early March shut down the entire market—home to tens of thousands of businesses—over a single virus case and quarantined virtually all who worked there, according to one shop owner Wang Ling (alias), who joined the protest.

She had gone through 16 days of quarantine even though she didn’t make contact with the infected person, she said.

“We really can’t survive anymore,” Wang told The Epoch Times, noting that they’ve been losing money ever since the COVID-19 pandemic’s emergence two years ago.

She watched the police take away at least four people.

‘Matter of Life and Death’

With more cities going into lockdown, more stories are emerging on the Chinese internet about residents being denied medical care as a result of stringent lockdown rules and the sometimes tragic consequences of such decisions.

A Shanghai cancer patient in his 70s recently jumped off a building and broke his ankle, reportedly because neighborhood committee officials refused to allow him to leave the compound to obtain prescribed medicine.

In Hebei, a northern province near Beijing, multiple hospitals turned away a woman seeking to treat a suspected malignant tumor, because of COVID-19 restriction measures. The woman at one point fell unconscious while waiting outside a hospital with her husband. Blood and pus were coming out of her lower body, but she was left there in freezing temperatures for nearly 10 hours before anyone responded.

“Do they want us to slowly die at home?” her husband said in a video posted on Douyin, the Chinese version of TikTok, pleading for public attention for her case. “Is it so hard for us commoners to get treatment? Does no one care about our lives?”

The resulting public pressure caused authorities to act on the woman’s case, promising to connect her with the top local hospital and experts for treatment. But many others have been less fortunate.

In the Anci district of Langfang, the same city the couple is from, a senior resident died after being sealed at home and running out of medicine, volunteer health worker Ge Ming (pseudonym) told The Epoch Times.

A Shanghai nurse died of asthma at the age of 49 after she was turned away by her own hospital, which had suspended emergency services because of virus control, according to a statement from her employer, Shanghai East Hospital. She died that night, shortly after her family rushed her to another hospital.

Since March 20, about 200 patients with kidney failure requiring dialysis have been turned out of Shanghai Zhoupu Hospital, according to online advocates and nearby residents.

“It’s a matter of life and death,” Hu Yuemei (pseudonym), who lives in the neighborhood and is friends with the nurses, told The Epoch Times.

The hospital cares less about people’s lives than its standing with local officials, she suggested.

The Epoch Times couldn’t reach the hospital or the district health commission through repeated phone calls.

The lockdown-induced social costs prompted a Shanghai resident in his 70s to write a public letter to the mayor criticizing what he saw as “stupid” governance.

“The virus has not inflicted as much damage to the public as these stupid policies,” he said in the letter viewed by The Epoch Times.

“People can’t work, can’t generate wealth for society, can’t make a living, can’t see doctors, and even hospitals are shut,” he wrote. “Can hospitals that save lives get shut down so casually during an outbreak? What level of stupidity does it take to make such decisions?”

Struggles to source adequate supplies have meanwhile fueled a rise in online complaints from those in locked-down areas.

Shanghai’s announcement of a snap lockdown over the weekend left many with only hours to stock up on supplies, leading to late-night tussles in packed grocery markets as locals snatched up whatever remained on the shelves. One man was pictured dragging three trash bags full of ramen packets while standing in line.

“When I walked into the produce market and saw the empty shelves, vegetable leaves all over the ground, and lost shoes, I knew this city has gone crazy,” a resident wrote in a social media post.
A store owner told The Epoch Times their store was stripped bare during the panic buying. They could not restock until at least April 1, he said, adding that new orders for supplies have all been turned down because trucking services have ground to a halt.

The challenge is even greater for the elderly who are less technologically savvy. One senior in the northeastern city Changchun, who had been forced to live by himself since a week earlier due to the city’s COVID rules, was filmed venturing to buy food from a nearby store.

“Please have some sympathy with me,” he repeatedly said in front of the shut glass door, only to be told that he had to order through the Chinese super app WeChat.

“What is Wechat? Where can I get this Wechat?” asked the bewildered man, apparently choking in tears.

City officials followed up after a clip of the exchange circulated tens of thousands of times online and said they have sent supplies such as milk and rice to the man, but many remain unsatisfied.

“He is not alone,” a user on China’s Twitter-like Weibo commented under the officials’ post. “He represents a segment of society.”