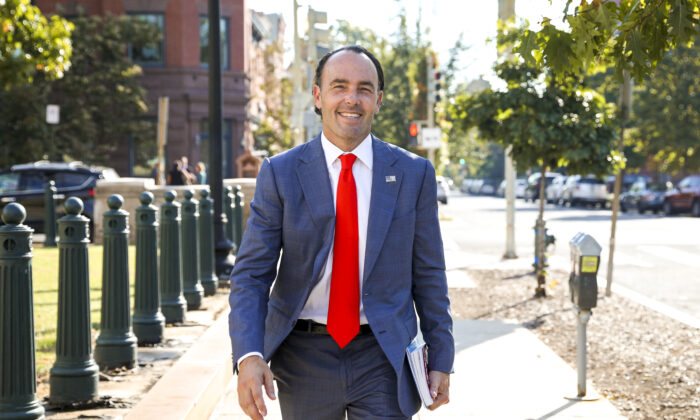 Kyle Bass, the founder and chief investment officer of Hayman Capital Management and a founding member of the Committee on the Present Danger: China, in Washington on Sep. 26, 2019. (Samira Bouaou/The Epoch Times)
Technology

“It is, I think, the single largest threat to the West in the last 50 years. And it’s being overshadowed by the Russian invasion of Ukraine,” Bass said during a recent interview on EpochTV’s “American Thought Leaders” program.

Pilot tests of the e-yuan are being carried out in more than 20 different Chinese cities, and the money was made available to visiting foreigners through a mobile app for the first time during the 2022 Beijing Winter Olympics.

“This isn’t a simple digital payment app. This is an app that tracks where you are, what your name is, what your Social Security number is, [and] what all of your identifiers are,” he said.

“It has geo-locating ability.”

Bass said that once the Chinese digital currency is fully developed and is made available to everyone outside of China, the Chinese regime could seek out certain e-yuan users, such as those in financial trouble, and corrupt them.

“Image if the Chinese government had access to every Tom, Dick, and Harry in America, and in Europe, and in Canada,” he said. “Imagine if they could cross-run an algorithm that says, ‘Let’s look for U.S. government employees that have Tinder that are short on cash—and maybe they’re married—and we can corrupt them immediately.’

“It gives them the ramp to corrupt anyone and everyone around the world that’s corruptible, which is a real national security problem,” he said. “So it’s a way they can export digital authoritarianism.”

China’s global rollout of its e-yuan has a very specific agenda, Bass said, which is to reduce its dependence on the U.S. dollar.

More than 80 countries in the world, including the United States, are exploring the issuance of CBDC, according to tracking by the Washington-based think tank Atlantic Council. So far, Nigeria is among nine countries that have launched digital forms of their currencies.

In March, the White House issued an outline of President Joe Biden’s executive order on digital assets. The president was “placing urgency” on research and development of a U.S. CBDC, and he said that issuing one was “deemed in the national interest.”

Several U.S. lawmakers have been keen to see the threat posed by the e-yuan properly addressed. In May last year, Reps. French Hill (R-Ark.) and Jim Himes (D-Conn.) introduced the 21st Century Dollar Act (H.R.3506), which would require the U.S. Treasury Department to include in a report for Congress any risks to the U.S. dollar posed by the digital yuan.

In March, Sen. Marsha Blackburn (R-Tenn.) and eight of her Republican colleagues introduced the Say No to the Silk Road Act (S.3784). If enacted, the legislation would require the U.S. Commerce Department and U.S. Trade Representative’s office to file reports on the e-yuan.

Additionally, the U.S. State Department would be required to put a notice on its website warning U.S. citizens traveling to China “about the dangers of the digital yuan,” according to the text of the bill.

“There are some senators that you’ll see in the coming weeks are going to launch legislation to outlaw its use. And I believe that legislation must happen,” Bass said.

“The West needs to convene, and we need to ban it immediately. You can’t have a little bit of cancer: you either have cancer, or you don’t have cancer.”