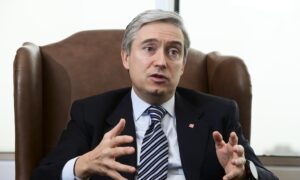 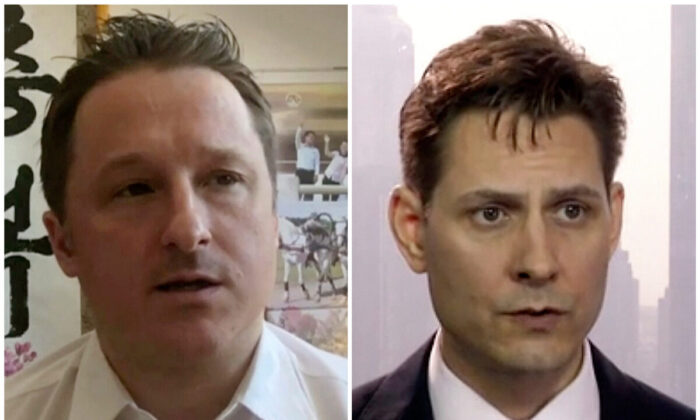 (Left) Michael Spavor, director of Paektu Cultural Exchange, during a Skype interview in Yanji, China, on March 2, 2017. (Right) Michael Kovrig, an adviser with the International Crisis Group, a Brussels-based NGO, during an interview in Hong Kong on March 28, 2018. (AP Photo)
Canada

China has closed the trial of the second arbitrarily detained Canadian, while once again denying consular access to the hearing, a move that an expert says is a violation of a consular agreement.

Michael Kovrig, a former Canadian diplomat, faced a closed-door trial on March 22 on charges of “spying into state secrets and intelligence” for foreign entities, Beijing’s No. 2 Intermediate Court said in a statement. The court said a verdict will be issued at a later date.

Kovrig’s hearing follows the March 19 trial of Michael Spavor, a Canadian businessman who faced similar charges of espionage. The Intermediate People’s Court of Dandong in Liaoning Province, where Spavor was put on trial, also didn’t announce a verdict.

Chinese officials denied Canadian consular access to both trials for the “two Michaels,” which is a clear breach of the Canada-China Consular Agreement, according to Donald Clarke, a Chinese law specialist and law professor at the George Washington University.

In his article published last week, Clarke argued that China’s attempt to justify the exclusion of Canadian diplomats from the hearing on the grounds that state secrets are involved won’t hold, because “any denial of access is a breach of the Agreement.”

Clarke supported his argument, quoting the Consular Agreement Article 8 (5), which states, “A consular officer shall be permitted to attend the trial or other legal proceedings.”

“It’s extremely important to understand that to say that Art. 8(5) doesn’t apply because there are state secrets involved is like saying it doesn’t apply because it’s Tuesday,” Clarke wrote. “There is simply no exception there, and Art. 8(7) makes it clear that China can’t cite its own law as a justification for restricting the rights under Art. 8(5).”

Kovrig and Spavor have been in custody since December 2018, shortly after Canada arrested Huawei Chief Financial Officer Meng Wanzhou at the behest of the U.S. government.

U.S. officials want Meng extradited on charges of bank fraud and conspiracy, saying Meng and her company allegedly lied to multiple financial institutions, including HSBC, in an effort to evade American sanctions against Iran.

China has repeatedly denied wrongdoing in its treatment of Kovrig and Spavor, despite allegations that their detention was a hostile retaliation for Meng’s arrest.

In a statement released on March 22, Canadian Foreign Affairs Minister Marc Garneau also condemned the lack of transparency in the Chinese court hearing process for Spavor and Kovrig.

As Minister of Foreign Affairs, securing the safe return to Canada of Mr. Kovrig and Mr. Spavor is my top priority.

We are deeply troubled by the lack of transparency surrounding the hearings and we continue to work to end their arbitrary detention.

Clarke noted that China has “successfully tried this same trick” in 2010, in the trial against Australian citizen Stern Hu.

Hu, a former executive of the Rio Tinto mining group, was detained by the Chinese regime in July 2009, on charges of stealing commercial secrets and accepting bribes. Hu was sentenced to 10 years in prison, while three of his colleagues were sentenced to 7 to 14 years in prison. He was released in 2018, after serving eight years.

In Hu’s case, rather than outright denial of the Australia-China Consular Agreement—which is similar to the Canada-China Agreement in the part of consular access—the Chinese Ministry of Foreign Affairs said at the time, according to Clarke: “Please don’t mix up the relationship between a country’s sovereignty, particularly its judicial sovereignty, and the Chinese-Australian Agreement on Consular Relations. The Chinese-Australian Agreement on Consular Relations must be premised on respect for China’s sovereignty and judicial sovereignty.”

“The Australians acquiesced to this clear breach without a fuss, or at least without any public fuss,” Clarke said. “I don’t see any reason for Canada to do the same.

“At this point, it seems a little late in the day to worry about hurting the feelings of the Chinese people.”

Clarke also warned the European Union, which is working toward an investment agreement with China, about Beijing’s repeated practices of abandoning international treaties.