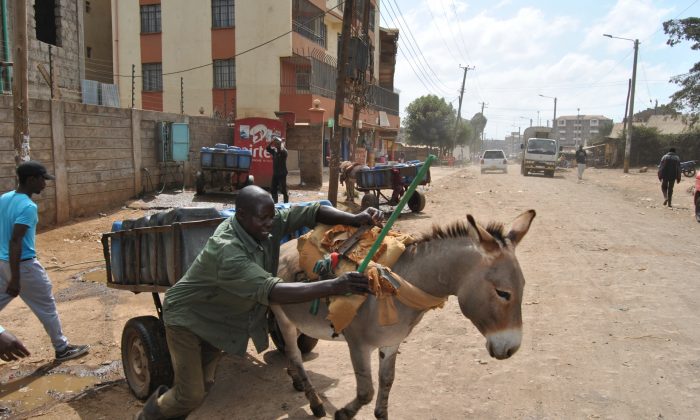 A water dealer helps his donkey pull the cart after filling water at a water point in Rongai, Kajiado county on Feb. 5, 2019. (Dominic Kirui/Special to The Epoch Times)
Africa

KAJIADO, Kenya—On a sunny and dusty morning in Rongai, about 12 miles south of Kenya’s capital Nairobi, David Kinyanjui is busy fetching water at one of the small town’s water points. He uses a donkey to pull the cart full of 20-liter jerry cans of water for sale.

The 46-year-old father of three has been in this trade for the past 15 years, using his donkey to transport water and building materials, such as cement and bricks, and also helping residents move to different houses in the area.

On a good day, Kinyanjui said that he can make up to 3,000 Kenyan shillings ($30) selling water using his donkey. This is mostly during the dry seasons when tapped water is not reliable in many households and residents are forced to buy water from the donkey-drawn carts.

This is Kinyanjui’s second donkey; his first was stolen.

“This is my livelihood and is what puts food on my family’s table, as well as takes my children to school. If my donkey was to be stolen again and killed, this would be a great loss, as I would be helpless and my family and other dependents will suffer,” Kinyanjui told The Epoch Times.

After his first donkey was stolen, he struggled for six months as he pulled the cart himself so he could keep earning money to pay his bills. He tried to find his donkey, but was met with an unpleasant sight.

“I followed the trails and only found my donkey’s legs and head in a bush in Mbagathi [a settlement in Nairobi], and was later told by friends that the meat and skin were sold out to the Naivasha slaughterhouse,” Kinyanjui said.

The demand for donkey skin, in particular, has been fueled by the rising demand for ejiao, a traditional Chinese medicine that is believed to enhance beauty in women, prevent old age ailments, and enhance libido for both men and women.

Kenya has the highest number of donkey slaughterhouses in Africa, with at least five spread across the country in Nakuru, Turkana, Baringo, and, most recently, Kitui counties.

According to an animal welfare researcher, who has asked for anonymity to protect his research and sources, many African countries have expressed alarm at the opening of donkey slaughterhouses in their villages. Residents in Ethiopia burned down the first slaughterhouse before it was even operational.

The researcher is based in Nairobi and works with a non-governmental organization operating across Africa. He said that the demand for ejiao is the leading cause of the loss of donkeys by households, negatively impacting their livelihoods.

Kenya has become a target for the theft and slaughter of donkeys, which are then exported to China, the researcher said, citing corruption as a contributing factor to the problem.

“The chiefs and political leaders in these areas are bribed and they allow for the abattoirs to be put up, even against the will of the local population in the area,” the researcher said.

A few blocks away from the water point is Frederick Otieno’s corrugated sheet iron house. Otieno had just returned from the bush that surrounds the town, where he had gone to see if he could find evidence that his donkey had been slaughtered.

Otieno’s donkey didn’t come home the previous day as usual. He didn’t know where to start searching for it.

“I had to run there [to the bush] and check if I can find his legs and head, because that’s what these thieves do. At first, they used to leave the skin and take the meat only, but these days, I hear even the skin is bought by the Chinese,” he said.

Otieno had let his donkey loose to graze after a day’s work, carrying water to residents and businesses around Rongai. Back at home, he usually locks the donkey next to his door using a steel chain attached to its leg to prevent it from being stolen.

Many households across Africa depend on a donkey both for commercial and domestic work, and they are now losing their animals of burden at an alarming rate. Kenya was home to about 1.8 million donkeys, according to 2009 figures, but now there are fears that the Chinese demand for donkey meat and skin has halved the population.

To satisfy the demand, smugglers now turn to neighboring countries, buying or stealing donkeys then walking or trucking them across the porous borders of Ethiopia, Tanzania, and Somalia.

An investigation by Oxpeckers Investigative Environmental Journalism and sponsored by the UK-based charity The Donkey Sanctuary found that thousands of donkeys are now sourced from other East African countries to meet the ever-growing demand from China, with Kenya a destination for smuggling.

The investigative report indicated that “up to 3,000 donkeys of mixed sex and age are sold on the open livestock markets of Ethiopia a month, although the middlemen pay better for large and healthy males. The prices range from between 1,600 Ethiopian birr ($57) and 3,000 birr ($106) per beast.”

The animal welfare researcher said that China used to have the highest number of donkeys in the world, with around 12 million animals, but has halved the population to fewer than six million, leaving Ethiopia at the top of the rankings, with eight million donkeys.

To avert the loss of donkeys and save household economies that depend on the animals in their daily activities, the only solution will be for the country to close down all slaughterhouses and completely stop the trade in donkey meat and skin, the researcher said.

“Even though they claim to have created employment for a few people, they do more harm than good to the economies across the sub-Saharan African households who depend on donkeys to carry out their daily socio-economic activities. They should just be closed down. There is a reason why all other governments did not allow for this,” the researcher said.