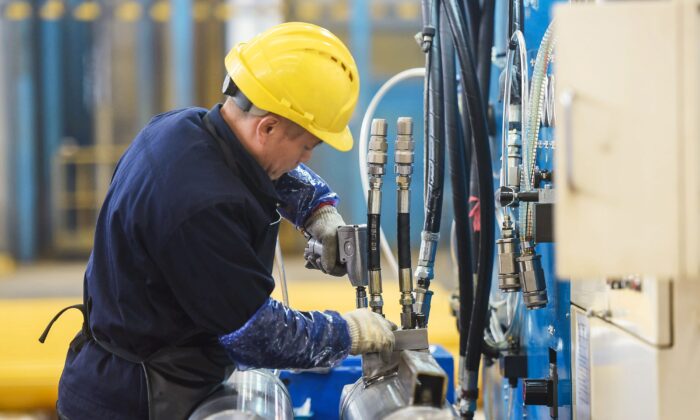 An employee works on a cylinder production line at a factory in Hangzhou in China's eastern Zhejiang Province on Jan. 17, 2020. (STR/AFP via Getty Images)
US News

The trade deficit with China has ballooned since then, costing an estimated 3.7 million U.S. jobs between 2001 and 2018, according to a new report by the Economic Policy Institute (EPI), a Washington-based nonprofit, nonpartisan think tank.

The United States lost nearly 90,000 manufacturing plants during the same period, as a result of U.S. companies moving their operations to low-cost countries, primarily China.

“We’ve lost a generation of skilled workers who used to be employed in those plants,” Robert Scott, senior economist and director of trade and manufacturing research at the Economic Policy Institute, told reporters on a conference call on Jan. 30.

“It’s been devastating for mainstream America and for communities across the country.”

Trade-distorting practices, currency manipulation and misalignment, and suppression of wages and labor rights resulted in a flood of subsidized imports to the United States from China, according to the EPI report.

U.S. manufacturing jobs were badly hit, especially between the years 2001 to 2008, largely due to China’s currency manipulation, Scott, a co-author of the report, said.

“They invested roughly $4 trillion, buying out U.S. Treasury bills and mortgage securities to drive up the value of the dollar and drive down the value of their currency,” he said.

By keeping its currency undervalued, China has made its exports cheap, thus gaining a competitive advantage in international trade.

Despite the strong U.S. labor market under President Donald Trump, the EPI study also showed that the job losses to China continued during the first two years of his administration. Nearly 700,000 jobs were lost in 2017 and 2018 because of the continued growth of the trade deficit with China, the report said.

“This problem didn’t happen overnight. And it won’t be fixed overnight, either,” Scott Paul, president of Alliance for American Manufacturing, told reporters on the call.

“President Trump was right to take on China’s trade. But the phase one trade deal isn’t good enough. Manufacturing plants around the country continue to close.”

Manufacturing jobs accounted for more than 75 percent of jobs lost overall. And the workers in advanced technology products manufacturing have suffered the most, according to the report.

The largest job displacement occurred in computers, semiconductors, and other electronics parts industry, which lost more than 1.3 million jobs, accounting for 36 percent of jobs displaced.

In addition, apparel and leather products, electrical equipment, appliances, and components, and fabricated metal products were among the other hard-hit sectors.

In 2018, the United States had a surplus in trade with the rest of the world in high technology products, Scott said, which suggests that “the deficit is entirely explained by unfair trade with China.”

All 50 states and every congressional district in the United States have suffered job losses to China, with California, Texas, New York, and Illinois being hardest-hit in terms of the net number of occupations displaced.

The study also found that the rising trade deficit with China caused wage losses for workers, mainly among those who don’t have a college degree.

“The U.S.–China trade relationship needs to undergo a fundamental change,” the report states.

“Addressing unfair trade, weak labor, and environmental standards in China, and ending currency manipulation and misalignment, should be our top trade and economic priorities with China.”