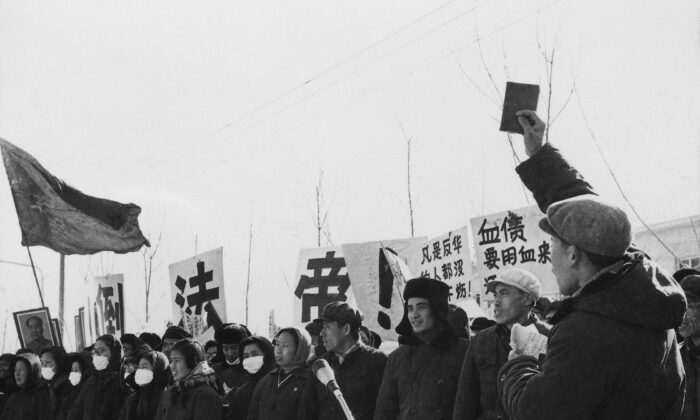 Chinese people demonstrate during the "great proletarian Cultural Revolution" in front of the French Embassy in Beijing on January 1967. Protesters show symbols of the Revolution such as the portrait of Mao Zedong, banners, and the book "Quotations from Chairman Mao Tse-tung." Since the Cultural Revolution was launched in May 1966 at Beijing University, Mao's aim was to recapture power after the failure of the "Great Leap Forward." (Jean Vincent/AFP via Getty Images)
Thinking About China

The Chinese regime is busy turning its “three big mountains”—health care, education, and property—into manageable molehills. The question, though, is “why?”

It’s all about control. In China, an uncompromising hierarchy exists. At the top sit the elites in Beijing. For those who forget their place in society, they’re quickly reminded. If in doubt, just ask Jack Ma, the founder of Alibaba who suspiciously isolated himself and decided to take up painting after criticizing those in power.

Will the resizing of the so-called “mountains” have a positive or negative impact on China? In truth, we won’t know the answer to that for quite some time. Nevertheless, the Chinese regime’s intent is clear. Let’s assume that the current onslaught is a success and China becomes even stronger, then what would this mean for the United States, China’s biggest rival?

According to the Pew Research Center, 91 percent of Americans view the Chinese regime as a direct threat to society. In a Gallup poll, 45 percent of Americans see China as the United States’ “greatest enemy.” It’s important to note that both of these polls were conducted before a Chinese health official announced at a press conference in July that Beijing refuses to cooperate with further inquiries into the origins of COVID-19.

For those who don’t view Beijing as a threat to Americans, please consider the following: The Chinese regime has stolen the personal data of 80 percent of American adults; to call China a threat is an understatement of epic proportions.

Let’s be clear, the Chinese Communist Party is not America’s friend. Friends don’t steal from each other. No, the Chinese regime is a direct competitor. To compete with the enemy, the United States must first get its own house in order.

According to Hong Kong-based writer Timothy McLaughlin, the U.S. retreat from Afghanistan has provided those in Beijing “with an opportune moment to gloat.” The Chinese regime is feeling emboldened. In a rather extreme commentary piece for People’s Daily Online, Beijing’s mouthpiece, the author calls for a “profound transformation.”

With this Cultural Revolution 2.0, the United States is very much in the Chinese regime’s crosshairs. On this path of “common prosperity,” amid a series of recent crackdowns, China is undergoing major changes. This “profound transformation,” according to the author, is in fact a revolution. Fifty-five years ago, China experienced its first Cultural Revolution. Although the effects were indeed profound, not to mention traumatizing, China carried absolutely no international clout. The changes were very much domestic in nature.

With the latest revolution, however, the optics couldn’t be any more different. What happens in China no longer stays in China. A revolution at home will very much become a revolution abroad. The ripple effects will be felt around the world.

As Xi Jinping promotes the idea of “common prosperity,” perhaps it’s time the United States promoted the idea of “common sense.” The author Anne Applebaum warns that today in America, “it is possible to meet people who have lost everything—jobs, money, friends, colleagues—after violating no laws, and sometimes no workplace rules either.” She is, of course, talking about “cancel culture.”

Those who find themselves “canceled,” according to Applebaum, “have broken (or are accused of having broken) social codes having to do with race, sex, personal behavior, or even acceptable humor, which may not have existed five years ago or maybe five months ago.” Although some “have made egregious errors of judgment,” others have done absolutely nothing at all. In this age of absolutism, nuance has been cast aside.

Where is this type of puritanism created? In schools across the country. Recently, a pro-Antifa teacher in California bragged about his desire to turn his students into “revolutionaries.” Gabriel Gipe, the teacher in question, admitted that he offers extra credit to students willing to attend protests organized by groups like the Party for Socialism and Liberation. The form of puritanism that Applebaum discusses is being nurtured by people like Gipe, and he’s not alone. On June 30, as Christopher F. Rufo reported, the National Education Association, the largest teachers’ union in the country, approved a plan to teach critical race theory (CRT) in every single state. Through the promotion of such questionable content, what sort of society is being created? The type that caters to the very people Applebaum discusses in her piece.

Right now, Americans are highly suspicious of each other. With the current culture wars intensifying in nature, and the idea of “mob justice” becoming more mainstream, will things get better or worse? I’ll let you decide. The United States, the only country capable of confronting China, is being torn from within.