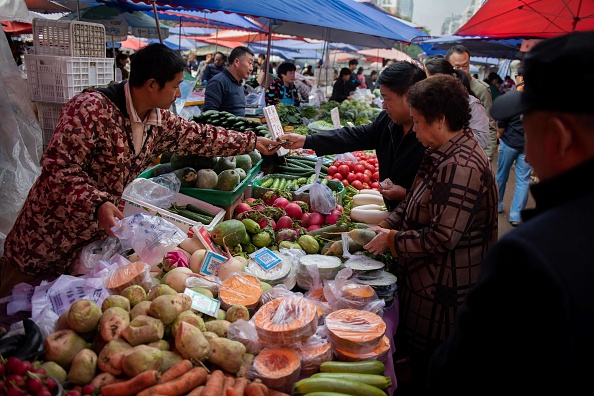 A vendor (L) sells vegetables to a customer at a market in Beijing on Oct. 16, 2018. (Nicolas ASFOURI / AFP/Getty Images)
China Business & Economy

China’s consumer price index (CPI), which is a gauge of inflation, rose 2.5 percent year-on-year in September to the highest level in seven months.

The statistics, released on Oct. 16 by the National Bureau of Statistics, show a rise of 0.7 percent from August.

Meanwhile, producer price inflation eased for the third straight month in September—an indication that momentum is slowing amid escalating trade tensions with the United States. The producer price index, which measures price changes from the perspective of a seller, rose 3.6 percent in September from a year ago, compared to a 4.1 percent increase in August, the NBS reported.

In non-food items, the costs of education and services increased the cost of living. The cost of living rose by 2.6 percent because of higher rents, a 21 percent increase in the price of gasoline, and an almost 24 percent gain in diesel fuel prices.

Within food categories, the price of fresh vegetables rose by almost 15 percent, fresh fruits by about 10 percent and eggs by 6.2 percent. While pork prices fell by 2.4 percent, the decline is slowing.

Two factors that caused food prices to increase in September were the African swine fever outbreak, which affected pork prices, and the U.S.–China trade war, as tariffs imposed by the United States on Chinese goods have affected the price on domestic goods.

Vegetable prices in Nanchang City, Jiangxi Province, rose significantly. According to sources that monitor two farmers markets in Dunzitang and Xianghu, the average price of 18 kinds of vegetables was 6.51 yuan per kilogram in September, compared to the previous month’s 6.17 yuan per kilogram.

An analysis by Taiwanese newspaper the Liberty Times noted that the increase in food prices, particularly eggs, fruits, and vegetables, will mostly impact China’s lower and middle classes. Other essential goods such as flour and cooking oil may also see a price increase. This will also affect baked goods, such as bread.

Amid rising prices, consumption levels in China are also projected to fall, due to the Chinese regime’s new taxation policies. China’s state taxation services will uniformly collect all social security taxes, starting in January, in an effort to counter tax evasion and cover increasing shortfalls in social insurance funding.

One analysis by a Chinese securities company projected that workplaces will pay an additional 1.5 trillion yuan in taxes per year, reducing their earnings by about 13 percent. As the reform tax plan increases corporate operating costs, it essentially passes these burdens to the employees, whose consumption will, in turn, decrease—by roughly 1.2 trillion yuan ($175.77 billion).