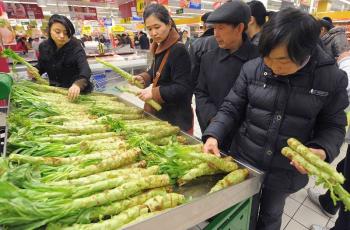 By He Aifang
Print
China’s consumer price index (CPI), a main gauge of inflation, rose higher than the expected year-on-year increase to 2.8 percent in April, pressuring Beijing to tighten its monetary policy.

The report was released Tuesday by China’s National Bureau of Statistics (NBS). The April CPI was up 0.4 percentage points from 2.4 percent in March, and higher than the 2.7 percent in February. This was the highest rate since October 2008 and beats analysts' forecasts of a 2.7 percent rise.

As reported by state-run Xinhua News Agency, NBS chief economist Yao Jingyuan attributed the April CPI growth mainly to a 5.9 percent increase in food prices, which accounted for about a third of the CPI calculation, according to the NBS.

An Associated Press (AP) report quoted NBS spokesman Sheng Laiyun saying, “Growth in the consumer price index is still mild compared with our economic recovery and inflation in other countries. But we are facing big inflation pressures in the short term.”

Dong Tao, an economist with Credit Suisse in Hong Kong, told Reuters, “Rising inflation is a serious problem, but it’s more of an indication of where the CPI is heading, which is more important than this 2.8 percent.”

China’s producer price index (PPI), another measurement of inflation at the wholesale level, grew 6.8 percent year-on-year in April. The figure is higher than the 6.5 percent predicted by analysts.

Analysts and foreign investors are watching closely to see whether China moves to rein in rising prices, as this would slow down its fast-running economy.

Brian Jackson, strategist at Bank of Canada, told the BBC, “Price pressures have been building throughout the economy, strengthening the case for higher interest rates and a stronger yuan … China is at risk of overheating,” he said.

Standard Chartered Bank economist Jinny Yan said in the same AP report, inflation was likely to rise further, possibly hitting a peak of four percent in June, but Beijing was unlikely to hike rates while the global outlook was uncertain amid Europe’s debt crisis.

The Global Times reported that the Chinese Academy of Social Sciences (CASS) recently adjusted the CPI prediction to 3.5 percent in its updated blue book, up from 2.1 percent predicted in December 2009. CASS believes that China may raise the deposit-reserve ratio, hike the interest rate, or adjust the foreign exchange rate.